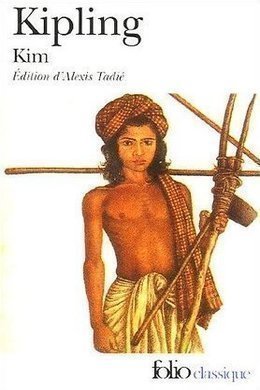 Rudyard Kipling has been attacked for championing British imperialism and celebrated for satirizing it. In fact, he did both. Nowhere does he express his own ambivalence more strongly than in Kim, his rousing adventure novel of a young man of many allegiances. Kimball O’Hara grows up an orphan in the walled city of Lahore, India. Deeply devoted to an old Tibetan lama but involved in a secret mission for the British, Kim struggles to weave the strands of his life into a single pattern. Charged with action and suspense, yet profoundly spiritual, Kim vividly expresses the sounds and smells, colors and characters, opulence and squalor of complex, contradictory India under British rule.

He sat, in defiance of municipal orders, astride the gun Zam Zammah on her brick platform opposite the old Ajaib-Gher–the Wonder House, as the natives call the Lahore Museum. Who hold Zam-Zammah, that ‘fire-breathing dragon’, hold the Punjab, for the great green-bronze piece is always first of the conqueror’s loot.

There was some justification for Kim–he had kicked Lala Dinanath’s boy off the trunnions–since the English held the Punjab and Kim was English. Though he was burned black as any native; though he spoke the vernacular by preference, and his mother-tongue in a clipped uncertain sing-song; though he consorted on terms of perfect equality with the small boys of the bazar; Kim was white–a poor white of the very poorest. The half-caste woman who looked after him (she smoked opium, and pretended to keep a second-hand furniture shop by the square where the cheap cabs wait) told the missionaries that she was Kim’s mother’s sister; but his mother had been nursemaid in a Colonel’s family and had married Kimball O’Hara, a young colour-sergeant of the Mavericks, an Irish regiment. He afterwards took a post on the Sind, Punjab, and Delhi Railway, and his Regiment went home without him. The wife died of cholera in Ferozepore, and O’Hara fell to drink and loafing up and down the line with the keen-eyed three-year-old baby. Societies and chaplains, anxious for the child, tried to catch him, but O’Hara drifted away, till he came across the woman who took opium and learned the taste from her, and died as poor whites die in India. His estate at death consisted of three papers–one he called his ‘ne varietur’ because those words were written below his signature thereon, and another his ‘clearance-certificate’. The third was Kim’s birth-certificate. Those things, he was used to say, in his glorious opium-hours, would yet make little Kimball a man. On no account was Kim to part with them, for they belonged to a great piece of magic–such magic as men practised over yonder behind the Museum, in the big blue-and-white Jadoo-Gher–the Magic House, as we name the Masonic Lodge. It would, he said, all come right some day, and Kim’s horn would be exalted between pillars–monstrous pillars–of beauty and strength. The Colonel himself, riding on a horse, at the head of the finest Regiment in the world, would attend to Kim–little Kim that should have been better off than his father. Nine hundred first-class devils, whose God was a Red Bull on a green field, would attend to Kim, if they had not forgotten O’Hara–poor O’Hara that was gang-foreman on the Ferozepore line. Then he would weep bitterly in the broken rush chair on the veranda. So it came about after his death that the woman sewed parchment, paper, and birth-certificate into a leather amulet-case which she strung round Kim’s neck.

‘And some day,’ she said, confusedly remembering O’Hara’s prophecies, ‘there will come for you a great Red Bull on a green field, and the Colonel riding on his tall horse, yes, and’ dropping into English–‘nine hundred devils.’

‘Ah,’ said Kim, ‘I shall remember. A Red Bull and a Colonel on a horse will come, but first, my father said, will come the two men making ready the ground for these matters. That is how my father said they always did; and it is always so when men work magic.’