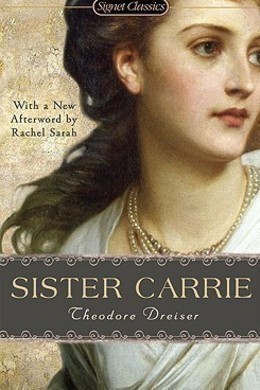 Theodore Dreiser’s first and perhaps most accessible novel, Sister Carrie is an epic of urban life - the story of an innocent heroine adrift in an indifferent city. When small-town girl Carrie Meeber sets out for Chicago, she is equipped with nothing but a few dollars, a certain unspoiled beauty and charm, and a pitiful lack of preparation for the complex moral choices she will face.

When Caroline Meeber boarded the afternoon train for Chicago, her total outfit consisted of a small trunk, a cheap imitation alligator-skin satchel, a small lunch in a paper box, and a yellow leather snap purse, containing her ticket, a scrap of paper with her sister’s address in Van Buren Street, and four dollars in money. It was in August, 1889. She was eighteen years of age, bright, timid, and full of the illusions of ignorance and youth. Whatever touch of regret at parting characterised her thoughts, it was certainly not for advantages now being given up. A gush of tears at her mother’s farewell kiss, a touch in her throat when the cars clacked by the flour mill where her father worked by the day, a pathetic sigh as the familiar green environs of the village passed in review, and the threads which bound her so lightly to girlhood and home were irretrievably broken.

To be sure there was always the next station, where one might descend and return. There was the great city, bound more closely by these very trains which came up daily. Columbia City was not so very far away, even once she was in Chicago. What, pray, is a few hours–a few hundred miles? She looked at the little slip bearing her sister’s address and wondered. She gazed at the green landscape, now passing in swift review, until her swifter thoughts replaced its impression with vague conjectures of what Chicago might be.

When a girl leaves her home at eighteen, she does one of two things. Either she falls into saving hands and becomes better, or she rapidly assumes the cosmopolitan standard of virtue and becomes worse. Of an intermediate balance, under the circumstances, there is no possibility. The city has its cunning wiles, no less than the infinitely smaller and more human tempter. There are large forces which allure with all the soulfulness of expression possible in the most cultured human. The gleam of a thousand lights is often as effective as the persuasive light in a wooing and fascinating eye. Half the undoing of the unsophisticated and natural mind is accomplished by forces wholly superhuman. A blare of sound, a roar of life, a vast array of human hives, appeal to the astonished senses in equivocal terms. Without a counsellor at hand to whisper cautious interpretations, what falsehoods may not these things breathe into the unguarded ear! Unrecognised for what they are, their beauty, like music, too often relaxes, then weakens, then perverts the simpler human perceptions.

Caroline, or Sister Carrie, as she had been half affectionately termed by the family, was possessed of a mind rudimentary in its power of observation and analysis. Self-interest with her was high, but not strong. It was, nevertheless, her guiding characteristic. Warm with the fancies of youth, pretty with the insipid prettiness of the formative period, possessed of a figure promising eventual shapeliness and an eye alight with certain native intelligence, she was a fair example of the middle American class–two generations removed from the emigrant. Books were beyond her interest–knowledge a sealed book. In the intuitive graces she was still crude. She could scarcely toss her head gracefully. Her hands were almost ineffectual. The feet, though small, were set flatly. And yet she was interested in her charms, quick to understand the keener pleasures of life, ambitious to gain in material things. A half-equipped little knight she was, venturing to reconnoitre the mysterious city and dreaming wild dreams of some vague, far-off supremacy, which should make it prey and subject–the proper penitent, grovelling at a woman’s slipper.

“That,” said a voice in her ear, “is one of the prettiest little resorts in Wisconsin.”

“Is it?” she answered nervously.

The train was just pulling out of Waukesha. For some time she had been conscious of a man behind. She felt him observing her mass of hair. He had been fidgetting, and with natural intuition she felt a certain interest growing in that quarter. Her maidenly reserve, and a certain sense of what was conventional under the circumstances, called her to forestall and deny this familiarity, but the daring and magnetism of the individual, born of past experiences and triumphs, prevailed. She answered.

He leaned forward to put his elbows upon the back of her seat and proceeded to make himself volubly agreeable.

“Yes, that is a great resort for Chicago people. The hotels are swell. You are not familiar with this part of the country, are you?”

“Oh, yes, I am,” answered Carrie. “That is, I live at Columbia City. I have never been through here, though.”

“And so this is your first visit to Chicago,” he observed.