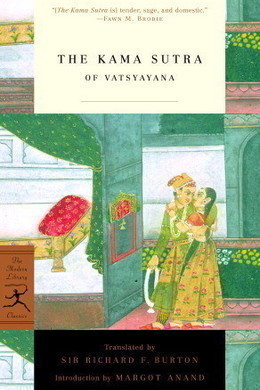 Sir Richard F. Burton’s translation of The Kama Sutra remains one of the best English interpretations of this early Indian treatise on politics, social customs, love, and intimacy. Its crisp style set a new standard for Sanskrit translation. The Kama Sutra stands uniquely as a work of psychology, sociology, Hindu dogma, and sexology. It has been a celebrated classic of Indian literature for 1,700 years and a window for the West into the culture and mysticism of the East.

Man, the period of whose life is one hundred years, should practise Dharma, Artha, and Kama at different times and in such a manner that they may harmonize together and not clash in any way. He should acquire learning in his childhood, in his youth and middle age he should attend to Artha and Kama, and in his old age he should perform Dharma, and thus seek to gain Moksha, i.e., release from further transmigration. Or, on account of the uncertainty of life, he may practise them at times when they are enjoined to be practised. But one thing is to be noted, he should lead the life of a religious student until he finishes his education.

Dharma should be learnt from the Shruti (Holy Writ), and from those conversant with it.

Artha is the acquisition of arts, land, gold, cattle, wealth, equipages and friends. It is, further, the protection of what is acquired, and the increase of what is protected.

Artha should be learnt from the king’s officers, and from merchants who may be versed in the ways of commerce.

Kama is the enjoyment of appropriate objects by the five senses of hearing, feeling, seeing, tasting, and smelling, assisted by the mind together with the soul. The ingredient in this is a peculiar contact between the organ of sense and its object, and the consciousness of pleasure which arises from that contact is called Kama.

Kama is to be learnt from the Kama Sutra (aphorisms on love) and from the practice of citizens.

When all the three, viz., Dharma, Artha, and Kama come together, the former is better than the one which follows it, i.e., Dharma is better than Artha, and Artha is better than Kama. But Artha should be always first practised by the king, for the livelihood of men is to be obtained from it only. Again, Kama being the occupation of public women, they should prefer it to the other two, and these are exceptions to the general rule.

Some learned men say that as Dharma is connected with things not belonging to this world, it is appropriately treated of in a book; and so also is Artha, because it is practised only by the application of proper means, and a knowledge of those means can only be obtained by study and from books. But Kama being a thing which is practised even by the brute creation, and which is to be found everywhere, does not want any work on the subject.

This is not so. Sexual intercourse being a thing dependent on man and woman requires the application of proper means by them, and those means are to be learnt from the Kama Shastra. The non-application of proper means, which we see in the brute creation, is caused by their being unrestrained, and by the females among them only being fit for sexual intercourse at certain seasons and no more, and by their intercourse not being preceded by thought of any kind.

The Lokayatikas say:–Religious ordinances should not be observed, for they bear a future fruit, and at the same time it is also doubtful whether they will bear any fruit at all. What foolish person will give away that which is in his own hands into the hands of another? Moreover, it is better to have a pigeon to-day than a peacock to-morrow; and a copper coin which we have the certainty of obtaining, is better than a gold coin, the possession of which is doubtful.

It is not so. 1st. Holy Writ, which ordains the practice of Dharma, does not admit of a doubt.

2nd. Sacrifices such as those made for the destruction of enemies, or for the fall of rain, are seen to bear fruit.

3rd. The sun, moon, stars, planets and other heavenly bodies appear to work intentionally for the good of the world.

4th. The existence of this world is effected by the observance of the rules respecting the four classes of men and their four stages of life.

5th. We see that seed is thrown into the ground with the hope of future crops.

Vatsyayana is therefore of opinion that the ordinances of religion must be obeyed.