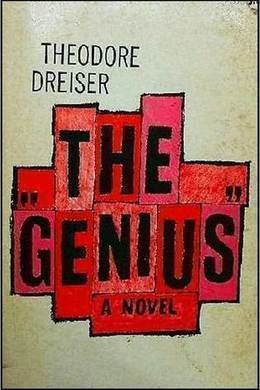 Theodore Dreiser heavily invested himself in The Genius, an autobiographical novel first published in 1915. Thoroughly immersed in the turn-of-the-century art scene, The Genius explores the multiple conflicts between art and business, art and marriage, and between traditional and modern views of sexual morality. Despite heavy editing, The Genius was deemed so shocking that its sale was immediately prohibited by the New York Society for the Suppression of Vice. It was not released until 1923, and thereafter the episode confirmed Dreiser’s status as a writer ahead of his time.

This story has its beginnings in the town of Alexandria, Illinois, between 1884 and 1889, at the time when the place had a population of somewhere near ten thousand. There was about it just enough of the air of a city to relieve it of the sense of rural life. It had one street-car line, a theatre,–or rather, an opera house, so-called (why no one might say, for no opera was ever performed there)–two railroads, with their stations, and a business district, composed of four brisk sides to a public square. In the square were the county court-house and four newspapers. These two morning and two evening papers made the population fairly aware of the fact that life was full of issues, local and national, and that there were many interesting and varied things to do. On the edge of town, several lakes and a pretty stream–perhaps Alexandria’s most pleasant feature–gave it an atmosphere not unakin to that of a moderate-priced summer resort. Architecturally the town was not new. It was mostly built of wood, as all American towns were at this time, but laid out prettily in some sections, with houses that sat back in great yards, far from the streets, with flower beds, brick walks, and green trees as concomitants of a comfortable home life. Alexandria was a city of young Americans. Its spirit was young. Life was all before almost everybody. It was really good to be alive.

In one part of this city there lived a family which in its character and composition might well have been considered typically American and middle western. It was not by any means poor–or, at least, did not consider itself so; it was in no sense rich. Thomas Jefferson Witla, the father, was a sewing machine agent with the general agency in that county of one of the best known and best selling machines made. From each twenty, thirty-five or sixty-dollar machine which he sold, he took a profit of thirty-five per cent. The sale of machines was not great, but it was enough to yield him nearly two thousand dollars a year; and on that he had managed to buy a house and lot, to furnish it comfortably, to send his children to school, and to maintain a local store on the public square where the latest styles of machines were displayed. He also took old machines of other makes in exchange, allowing ten to fifteen dollars on the purchase price of a new machine. He also repaired machines,–and with that peculiar energy of the American mind, he tried to do a little insurance business in addition. His first idea was that his son, Eugene Tennyson Witla, might take charge of this latter work, once he became old enough and the insurance trade had developed sufficiently. He did not know what his son might turn out to be, but it was always well to have an anchor to windward.

He was a quick, wiry, active man of no great stature, sandy-haired, with blue eyes with noticeable eye-brows, an eagle nose, and a rather radiant and ingratiating smile. Service as a canvassing salesman, endeavoring to persuade recalcitrant wives and indifferent or conservative husbands to realize that they really needed a new machine in their home, had taught him caution, tact, savoir faire. He knew how to approach people pleasantly. His wife thought too much so.

Certainly he was honest, hard working, and thrifty. They had been waiting a long time for the day when they could say they owned their own home and had a little something laid away for emergencies. That day had come, and life was not half bad. Their house was neat,–white with green shutters, surrounded by a yard with well kept flower beds, a smooth lawn, and some few shapely and broad spreading trees. There was a front porch with rockers, a swing under one tree, a hammock under another, a buggy and several canvassing wagons in a nearby stable. Witla liked dogs, so there were two collies. Mrs. Witla liked live things, so there were a canary bird, a cat, some chickens, and a bird house set aloft on a pole where a few blue-birds made their home. It was a nice little place, and Mr. and Mrs. Witla were rather proud of it.

Miriam Witla was a good wife to her husband. A daughter of a hay and grain dealer in Wooster, a small town near Alexandria in McLean County, she had never been farther out into the world than Springfield and Chicago. She had gone to Springfield as a very young girl, to see Lincoln buried, and once with her husband she had gone to the state fair or exposition which was held annually in those days on the lake front in Chicago. She was well preserved, good looking, poetic under a marked outward reserve. It was she who had insisted upon naming her only son Eugene Tennyson, a tribute at once to a brother Eugene, and to the celebrated romanticist of verse, because she had been so impressed with his “Idylls of the King.”