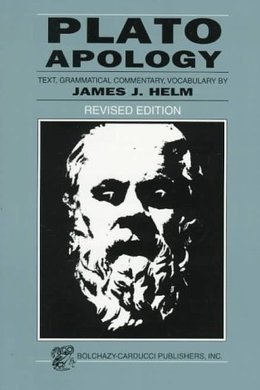 The Apology is Plato’s version of the speech given by Socrates as he defended himself in 399 BCE against the charges of ‘corrupting the young, & by not believing in the gods in whom the city believes, but in other daimonia that are novel’ (24b). ‘Apology’ here has its earlier meaning (now usually expressed by the word ‘apologia’) of speaking in defense of a cause or of one’s beliefs or actions (from the Ancient Greek ἀπολογία). The Apology can be divided into three parts. The 1st is Socrates’ own defense of himself & includes the most famous parts of the text, namely his recounting of the Oracle at Delphi & his cross-examination of Meletus. The 2nd part is the verdict. The 3rd part is the sentencing.

How you, O Athenians, have been affected by my accusers, I cannot tell; but I know that they almost made me forget who I was–so persuasively did they speak; and yet they have hardly uttered a word of truth. But of the many falsehoods told by them, there was one which quite amazed me;–I mean when they said that you should be upon your guard and not allow yourselves to be deceived by the force of my eloquence. To say this, when they were certain to be detected as soon as I opened my lips and proved myself to be anything but a great speaker, did indeed appear to me most shameless–unless by the force of eloquence they mean the force of truth; for is such is their meaning, I admit that I am eloquent. But in how different a way from theirs! Well, as I was saying, they have scarcely spoken the truth at all; but from me you shall hear the whole truth: not, however, delivered after their manner in a set oration duly ornamented with words and phrases. No, by heaven! but I shall use the words and arguments which occur to me at the moment; for I am confident in the justice of my cause (Or, I am certain that I am right in taking this course.): at my time of life I ought not to be appearing before you, O men of Athens, in the character of a juvenile orator–let no one expect it of me. And I must beg of you to grant me a favour:–If I defend myself in my accustomed manner, and you hear me using the words which I have been in the habit of using in the agora, at the tables of the money-changers, or anywhere else, I would ask you not to be surprised, and not to interrupt me on this account. For I am more than seventy years of age, and appearing now for the first time in a court of law, I am quite a stranger to the language of the place; and therefore I would have you regard me as if I were really a stranger, whom you would excuse if he spoke in his native tongue, and after the fashion of his country:–Am I making an unfair request of you? Never mind the manner, which may or may not be good; but think only of the truth of my words, and give heed to that: let the speaker speak truly and the judge decide justly.

And first, I have to reply to the older charges and to my first accusers, and then I will go on to the later ones. For of old I have had many accusers, who have accused me falsely to you during many years; and I am more afraid of them than of Anytus and his associates, who are dangerous, too, in their own way. But far more dangerous are the others, who began when you were children, and took possession of your minds with their falsehoods, telling of one Socrates, a wise man, who speculated about the heaven above, and searched into the earth beneath, and made the worse appear the better cause. The disseminators of this tale are the accusers whom I dread; for their hearers are apt to fancy that such enquirers do not believe in the existence of the gods. And they are many, and their charges against me are of ancient date, and they were made by them in the days when you were more impressible than you are now–in childhood, or it may have been in youth–and the cause when heard went by default, for there was none to answer. And hardest of all, I do not know and cannot tell the names of my accusers; unless in the chance case of a Comic poet. All who from envy and malice have persuaded you–some of them having first convinced themselves–all this class of men are most difficult to deal with; for I cannot have them up here, and cross-examine them, and therefore I must simply fight with shadows in my own defence, and argue when there is no one who answers. I will ask you then to assume with me, as I was saying, that my opponents are of two kinds; one recent, the other ancient: and I hope that you will see the propriety of my answering the latter first, for these accusations you heard long before the others, and much oftener.

Well, then, I must make my defence, and endeavour to clear away in a short time, a slander which has lasted a long time. May I succeed, if to succeed be for my good and yours, or likely to avail me in my cause! The task is not an easy one; I quite understand the nature of it. And so leaving the event with God, in obedience to the law I will now make my defence.