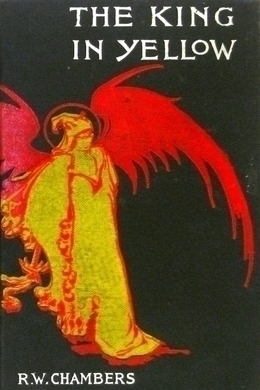 The King in Yellow

With its strange, imaginative blend of horror, science fiction, romance and lyrical prose, Robert W. Chambers’ The King in Yellow is a classic masterpiece of weird fiction. This series of vaguely connected stories is linked by the presence of a monstrous and suppressed book which brings fright, madness and spectral tragedy to all those who read it. An air of futility and doom pervade these pages like a sweet insidious poison. Dare you read it?

This collection has been called the most important book in Amercian supernatural fiction between Poe and the moderns. H.P. Lovecraft, creator of the famed Cthulu Mythos, whose own fiction was greatly influenced by this book stated that The King in Yellow ‘achieves notable heights of cosmic fear.’

Toward the end of the year 1920 the Government of the United States had practically completed the programme, adopted during the last months of President Winthrop’s administration. The country was apparently tranquil. Everybody knows how the Tariff and Labour questions were settled. The war with Germany, incident on that country’s seizure of the Samoan Islands, had left no visible scars upon the republic, and the temporary occupation of Norfolk by the invading army had been forgotten in the joy over repeated naval victories, and the subsequent ridiculous plight of General Von Gartenlaube’s forces in the State of New Jersey. The Cuban and Hawaiian investments had paid one hundred per cent and the territory of Samoa was well worth its cost as a coaling station. The country was in a superb state of defence. Every coast city had been well supplied with land fortifications; the army under the parental eye of the General Staff, organized according to the Prussian system, had been increased to 300,000 men, with a territorial reserve of a million; and six magnificent squadrons of cruisers and battle-ships patrolled the six stations of the navigable seas, leaving a steam reserve amply fitted to control home waters. The gentlemen from the West had at last been constrained to acknowledge that a college for the training of diplomats was as necessary as law schools are for the training of barristers; consequently we were no longer represented abroad by incompetent patriots. The nation was prosperous; Chicago, for a moment paralyzed after a second great fire, had risen from its ruins, white and imperial, and more beautiful than the white city which had been built for its plaything in 1893. Everywhere good architecture was replacing bad, and even in New York, a sudden craving for decency had swept away a great portion of the existing horrors. Streets had been widened, properly paved and lighted, trees had been planted, squares laid out, elevated structures demolished and underground roads built to replace them. The new government buildings and barracks were fine bits of architecture, and the long system of stone quays which completely surrounded the island had been turned into parks which proved a god-send to the population. The subsidizing of the state theatre and state opera brought its own reward. The United States National Academy of Design was much like European institutions of the same kind. Nobody envied the Secretary of Fine Arts, either his cabinet position or his portfolio. The Secretary of Forestry and Game Preservation had a much easier time, thanks to the new system of National Mounted Police. We had profited well by the latest treaties with France and England; the exclusion of foreign-born Jews as a measure of self-preservation, the settlement of the new independent negro state of Suanee, the checking of immigration, the new laws concerning naturalization, and the gradual centralization of power in the executive all contributed to national calm and prosperity. When the Government solved the Indian problem and squadrons of Indian cavalry scouts in native costume were substituted for the pitiable organizations tacked on to the tail of skeletonized regiments by a former Secretary of War, the nation drew a long sigh of relief. When, after the colossal Congress of Religions, bigotry and intolerance were laid in their graves and kindness and charity began to draw warring sects together, many thought the millennium had arrived, at least in the new world which after all is a world by itself.

But self-preservation is the first law, and the United States had to look on in helpless sorrow as Germany, Italy, Spain and Belgium writhed in the throes of Anarchy, while Russia, watching from the Caucasus, stooped and bound them one by one.

In the city of New York the summer of 1899 was signalized by the dismantling of the Elevated Railroads. The summer of 1900 will live in the memories of New York people for many a cycle; the Dodge Statue was removed in that year. In the following winter began that agitation for the repeal of the laws prohibiting suicide which bore its final fruit in the month of April, 1920, when the first Government Lethal Chamber was opened on Washington Square.