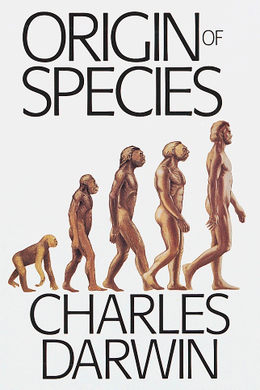 The Origin of Species

Charles Darwin’s groundbreaking work of evolutionary biology, The Origin of Species introduces the scientific theory of evolution, which posits that species evolve over a period of many generations through a process of natural selection. Darwin’s theories have been widely embraced by the scientific community as fact and have laid the foundation for subsequent major advances in the field of biology. It is arguably one of the most important scientific treatises ever written. This is the sixth edition of the formative text of evolutionary biology.

When we compare the individuals of the same variety or sub–variety of our older cultivated plants and animals, one of the first points which strikes us is, that they generally differ more from each other than do the individuals of any one species or variety in a state of nature. And if we reflect on the vast diversity of the plants and animals which have been cultivated, and which have varied during all ages under the most different climates and treatment, we are driven to conclude that this great variability is due to our domestic productions having been raised under conditions of life not so uniform as, and somewhat different from, those to which the parent species had been exposed under nature. There is, also, some probability in the view propounded by Andrew Knight, that this variability may be partly connected with excess of food. It seems clear that organic beings must be exposed during several generations to new conditions to cause any great amount of variation; and that, when the organisation has once begun to vary, it generally continues varying for many generations. No case is on record of a variable organism ceasing to vary under cultivation. Our oldest cultivated plants, such as wheat, still yield new varieties: our oldest domesticated animals are still capable of rapid improvement or modification.

As far as I am able to judge, after long attending to the subject, the conditions of life appear to act in two ways—directly on the whole organisation or on certain parts alone and in directly by affecting the reproductive system. With respect to the direct action, we must bear in mind that in every case, as Professor Weismann has lately insisted, and as I have incidently shown in my work on “Variation under Domestication,” there are two factors: namely, the nature of the organism and the nature of the conditions. The former seems to be much the more important; for nearly similar variations sometimes arise under, as far as we can judge, dissimilar conditions; and, on the other hand, dissimilar variations arise under conditions which appear to be nearly uniform. The effects on the offspring are either definite or in definite. They may be considered as definite when all or nearly all the offspring of individuals exposed to certain conditions during several generations are modified in the same manner. It is extremely difficult to come to any conclusion in regard to the extent of the changes which have been thus definitely induced. There can, however, be little doubt about many slight changes, such as size from the amount of food, colour from the nature of the food, thickness of the skin and hair from climate, etc. Each of the endless variations which we see in the plumage of our fowls must have had some efficient cause; and if the same cause were to act uniformly during a long series of generations on many individuals, all probably would be modified in the same manner. Such facts as the complex and extraordinary out growths which variably follow from the insertion of a minute drop of poison by a gall–producing insect, shows us what singular modifications might result in the case of plants from a chemical change in the nature of the sap.

In definite variability is a much more common result of changed conditions than definite variability, and has probably played a more important part in the formation of our domestic races. We see in definite variability in the endless slight peculiarities which distinguish the individuals of the same species, and which cannot be accounted for by inheritance from either parent or from some more remote ancestor. Even strongly–marked differences occasionally appear in the young of the same litter, and in seedlings from the same seed–capsule. At long intervals of time, out of millions of individuals reared in the same country and fed on nearly the same food, deviations of structure so strongly pronounced as to deserve to be called monstrosities arise…