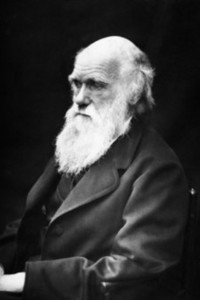 Charles Robert Darwin was an English naturalist who realised and presented compelling evidence that all species of life have evolved over time from common ancestors, through the process he called natural selection. His 1859 book On the Origin of Species established evolutionary descent with modification as the dominant scientific explanation of diversification in nature. He examined human evolution and sexual selection in The Descent of Man, and Selection in Relation to Sex, followed by The Expression of the Emotions in Man and Animals. His research on plants was published in a series of books, and in his final book, he examined earthworms and their effect on soil. (source: Wikipedia)

The Autobiography of Charles Darwin (1887)

Charles Darwin’s groundbreaking work of evolutionary biology, The Origin of Species introduces the scientific theory of evolution, which posits that spe...read more »

When the Beagle sailed out of Devonport on 27 December 1831, Charles Darwin was twenty-two and setting off on the voyage of a lifetime. It was to last f...read more »