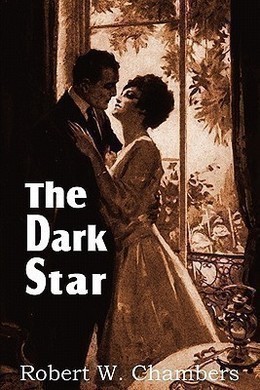 What if you were involved in the theft of one of the legendary jewels of all time – and you didn’t even know it? That’s exactly what happens to the innocent damsel at the center of Robert W. Chambers’ The Dark Star. She prays for a strong, silent savior to extract her from the mess she’s in – but will she recognize and call upon her own wit and spunk before it’s too late?

As long as she could remember she had been permitted to play with the contents of the late Herr Conrad Wilner’s wonder-box. The programme on such occasions varied little; the child was permitted to rummage among the treasures in the box until she had satisfied her perennial curiosity; conversation with her absent-minded father ensued, which ultimately included a personal narrative, dragged out piecemeal from the reticent, dreamy invalid. Then always a few pages of the diary kept by the late Herr Wilner were read as a bedtime story. And bath and bed and dreamland followed. That was the invariable routine, now once more in full swing.

Her father lay on his invalid’s chair, reading; his rubber-shod crutches rested against the wall, within easy reach. By him, beside the kerosene lamp, her mother sat, mending her child’s stockings and underwear.

Outside the circle of lamplight the incandescent eyes of the stove glowed steadily through the semi-dusk; and the child, always fascinated by anything that aroused her imagination, lifted her gaze furtively from time to time to convince herself that it really was the big, familiar stove which glared redly back at her, and not a dragon into which her creative fancy had so often transformed it.

Reassured, she continued to explore the contents of the wonder-box–a toy she preferred to her doll, but not to her beloved set of water-colours and crayon pencils.

Some centuries ago Pandora’s box let loose a world of troubles; Herr Wilner’s box apparently contained only pleasure for a little child whose pleasures were mostly of her own invention.

It was a curious old box, made of olive wood and bound with bands of some lacquered silvery metal to make it strong–rupee silver, perhaps–strangely wrought with Arabic characters engraved and in shallow relief. It had handles on either side, like a sea-chest; a silver-lacquered lock and hasp which retained traces of violent usage; and six heavy strap hinges of the same lacquered metal.

Within it the little child knew that a most fascinating collection of articles was to be discovered, taken out one by one with greatest care, played with discreetly, and, at her mother’s command, returned to their several places in Herr Wilner’s box.

There were, in this box, two rather murderous-looking Kurdish daggers in sheaths of fretted silver–never to be unsheathed, it was solemnly understood, except by the child’s father.

There was a pair of German army revolvers of the pattern of 1900, the unexploded cartridges of which had long since been extracted and cautiously thrown into the mill pond by the child’s mother, much to the surprise, no doubt, of the pickerel and sunfish.

There were writing materials of sandalwood, a few sea shells, a dozen books in German with many steel plate engravings; also a red Turkish fez with a dark blue tassel; two pairs of gold-rimmed spectacles; several tobacco pipes of Dresden porcelain, a case full of instruments for mechanical drawing, a thick blank book bound in calf and containing the diary of the late Herr Wilner down to within a few minutes before his death.

Also there was a figure in bronze, encrusted with tarnished gold and faded traces of polychrome decoration.

Erlik, the Yellow Devil, as Herr Wilner called it, seemed too heavy to be a hollow casting, and yet, when shaken, something within rattled faintly, as though when the molten metal was cooling a fissure formed inside, into which a few loose fragments of bronze had fallen.

It apparently had not been made to represent any benign Chinese god; the aspect of the yellow figure was anything but benevolent. The features were terrific; scowls infested its grotesque countenance; threatening brows bent inward; angry eyes rolled in apparent fury; its double gesture with sword and javelin was violent and almost humorously menacing. And Ruhannah adored it.

For a little while the child played her usual game of frightening her doll with the Yellow Devil and then rescuing her by the aid of a fairy prince which she herself had designed, smeared with water-colours, and cut out with scissors from a piece of cardboard.

After a time she turned to the remaining treasures in the wonder-box. These consisted of several volumes containing photographs, others full of sketches in pencil and water-colour, and a thick roll of glazed linen scrolls covered with designs in India ink.

The photographs were of all sorts–landscapes, rivers, ships in dock, dry dock, and at sea; lighthouses, forts, horses carrying soldiers armed with lances and wearing the red fez; artillery on the march, infantry, groups of officers, all wearing the same sort of fez which lay there in Herr Wilner’s box of olive wood.