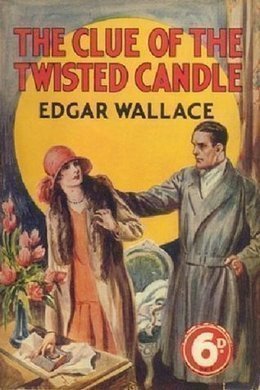 The Clue of the Twisted Candle

Ruthless criminal masterminds, deliciously devious villains, last-minute escapes, mysterious figures lurking in the shadows, a spunky female detective – when it comes to classic detective novels, Edgar Wallace’s The Clue of the Twisted Candle definitely hits all of its marks. Fans of the genre will adore this fast-paced thriller.

The 4.15 from Victoria to Lewes had been held up at Three Bridges in consequence of a derailment and, though John Lexman was fortunate enough to catch a belated connection to Beston Tracey, the wagonette which was the sole communication between the village and the outside world had gone.

“If you can wait half an hour, Mr. Lexman,” said the station-master, “I will telephone up to the village and get Briggs to come down for you.”

John Lexman looked out upon the dripping landscape and shrugged his shoulders.

“I’ll walk,” he said shortly and, leaving his bag in the station-master’s care and buttoning his mackintosh to his chin, he stepped forth resolutely into the rain to negotiate the two miles which separated the tiny railway station from Little Tracey.

The downpour was incessant and likely to last through the night. The high hedges on either side of the narrow road were so many leafy cascades; the road itself was in places ankle deep in mud. He stopped under the protecting cover of a big tree to fill and light his pipe and with its bowl turned downwards continued his walk. But for the driving rain which searched every crevice and found every chink in his waterproof armor, he preferred, indeed welcomed, the walk.

The road from Beston Tracey to Little Beston was associated in his mind with some of the finest situations in his novels. It was on this road that he had conceived “The Tilbury Mystery.” Between the station and the house he had woven the plot which had made “Gregory Standish” the most popular detective story of the year. For John Lexman was a maker of cunning plots.

If, in the literary world, he was regarded by superior persons as a writer of “shockers,” he had a large and increasing public who were fascinated by the wholesome and thrilling stories he wrote, and who held on breathlessly to the skein of mystery until they came to the denouement he had planned.

But no thought of books, or plots, or stories filled his troubled mind as he strode along the deserted road to Little Beston. He had had two interviews in London, one of which under ordinary circumstances would have filled him with joy: He had seen T. X. and “T. X.” was T. X. Meredith, who would one day be Chief of the Criminal Investigation Department and was now an Assistant Commissioner of Police, engaged in the more delicate work of that department.

In his erratic, tempestuous way, T. X. had suggested the greatest idea for a plot that any author could desire. But it was not of T. X. that John Lexman thought as he breasted the hill, on the slope of which was the tiny habitation known by the somewhat magnificent title of Beston Priory.

It was the interview he had had with the Greek on the previous day which filled his mind, and he frowned as he recalled it. He opened the little wicket gate and went through the plantation to the house, doing his best to shake off the recollection of the remarkable and unedifying discussion he had had with the moneylender.

Beston Priory was little more than a cottage, though one of its walls was an indubitable relic of that establishment which a pious Howard had erected in the thirteenth century. A small and unpretentious building, built in the Elizabethan style with quaint gables and high chimneys, its latticed windows and sunken gardens, its rosary and its tiny meadow, gave it a certain manorial completeness which was a source of great pride to its owner.

He passed under the thatched porch, and stood for a moment in the broad hallway as he stripped his drenching mackintosh.

The hall was in darkness. Grace would probably be changing for dinner, and he decided that in his present mood he would not disturb her. He passed through the long passage which led to the big study at the back of the house. A fire burnt redly in the old-fashioned grate and the snug comfort of the room brought a sense of ease and relief. He changed his shoes, and lit the table lamp.

The room was obviously a man’s den. The leather-covered chairs, the big and well-filled bookcase which covered one wall of the room, the huge, solid-oak writing-desk, covered with books and half-finished manuscripts, spoke unmistakably of its owner’s occupation.

After he had changed his shoes, he refilled his pipe, walked over to the fire, and stood looking down into its glowing heart.

He was a man a little above medium height, slimly built, with a breadth of shoulder which was suggestive of the athlete. He had indeed rowed 4 in his boat, and had fought his way into the semi-finals of the amateur boxing championship of England. His face was strong, lean, yet well-moulded. His eyes were grey and deep, his eyebrows straight and a little forbidding. The clean-shaven mouth was big and generous, and the healthy tan of his cheek told of a life lived in the open air.