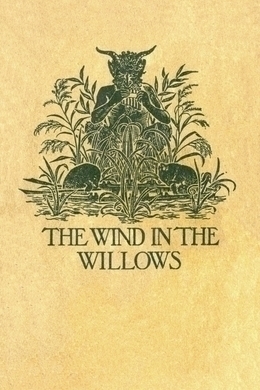 The Wind in the Willows

Mole, Water Rat, Badger, and the mischievous Toad live a quiet life on banks of the River Thames with the rest of their animal friends. But Toad tends to get into trouble, and his passion for cars eventually results in his being caught and kept a helpless prisoner in the remotest dungeon of the best-guarded castle in all the land. Dressed as a washerwoman—and with some help from his friends—Toad manages to escape the castle and begins his journey home to Toad Hall. The Wind in the Willows is a book for those “who keep the spirit of youth alive in them; of life, sunshine, running water, woodlands, dusty roads, winter firesides.” So wrote Kenneth Grahame of his timeless tale of Rat, Mole,Badger, and Toad.

The Mole had been working very hard all the morning, spring-cleaning his little home. First with brooms, then with dusters; then on ladders and steps and chairs, with a brush and a pail of whitewash; till he had dust in his throat and eyes, and splashes of whitewash all over his black fur, and an aching back and weary arms. Spring was moving in the air above and in the earth below and around him, penetrating even his dark and lowly little house with its spirit of divine discontent and longing. It was small wonder, then, that he suddenly flung down his brush on the floor, said, “Bother!” and “O blow!” and also “Hang spring-cleaning!” and bolted out of the house without even waiting to put on his coat. Something up above was calling him imperiously, and he made for the steep little tunnel which answered in his case to the gravelled carriage-drive owned by animals whose residences are nearer to the sun and air. So he scraped and scratched and scrabbled and scrooged, and then he scrooged again and scrabbled and scratched and scraped, working busily with his little paws and muttering to himself, “Up we go! Up we go!” till at last, pop! his snout came out into the sunlight and he found himself rolling in the warm grass of a great meadow.

“This is fine!” he said to himself. “This is better than whitewashing!” The sunshine struck hot on his fur, soft breezes caressed his heated brow, and after the seclusion of the cellarage he had lived in so long the carol of happy birds fell on his dulled hearing almost like a shout. Jumping off all his four legs at once, in the joy of living and the delight of spring without its cleaning, he pursued his way across the meadow till he reached the hedge on the further side.

“Hold up!” said an elderly rabbit at the gap. “Sixpence for the privilege of passing by the private road!” He was bowled over in an instant by the impatient and contemptuous Mole, who trotted along the side of the hedge chaffing the other rabbits as they peeped hurriedly from their holes to see what the row was about. “Onion-sauce! Onion-sauce!” he remarked jeeringly, and was gone before they could think of a thoroughly satisfactory reply. Then they all started grumbling at each other. “How stupid you are! Why didn’t you tell him–” “Well, why didn’t you say–” “You might have reminded him–” and so on, in the usual way; but, of course, it was then much too late, as is always the case.

It all seemed too good to be true. Hither and thither through the meadows he rambled busily, along the hedgerows, across the copses, finding everywhere birds building, flowers budding, leaves thrusting–everything happy, and progressive, and occupied. And instead of having an uneasy conscience pricking him and whispering “whitewash!” he somehow could only feel how jolly it was to be the only idle dog among all these busy citizens. After all, the best part of a holiday is perhaps not so much to be resting yourself, as to see all the other fellows busy working.

He thought his happiness was complete when, as he meandered aimlessly along, suddenly he stood by the edge of a full-fed river. Never in his life had he seen a river before–this sleek, sinuous, full-bodied animal, chasing and chuckling, gripping things with a gurgle and leaving them with a laugh, to fling itself on fresh playmates that shook themselves free, and were caught and held again. All was a-shake and a-shiver–glints and gleams and sparkles, rustle and swirl, chatter and bubble. The Mole was bewitched, entranced, fascinated. By the side of the river he trotted as one trots, when very small, by the side of a man who holds one spellbound by exciting stories; and when tired at last, he sat on the bank, while the river still chattered on to him, a babbling procession of the best stories in the world, sent from the heart of the earth to be told at last to the insatiable sea.

As he sat on the grass and looked across the river, a dark hole in the bank opposite, just above the water’s edge, caught his eye, and dreamily he fell to considering what a nice, snug dwelling-place it would make for an animal with few wants and fond of a bijou riverside residence, above flood level and remote from noise and dust. As he gazed, something bright and small seemed to twinkle down in the heart of it, vanished, then twinkled once more like a tiny star. But it could hardly be a star in such an unlikely situation; and it was too glittering and small for a glow-worm. Then, as he looked, it winked at him, and so declared itself to be an eye; and a small face began gradually to grow up round it, like a frame round a picture.

A brown little face, with whiskers.

A grave round face, with the same twinkle in its eye that had first attracted his notice.

It was the Water Rat!

Then the two animals stood and regarded each other cautiously.