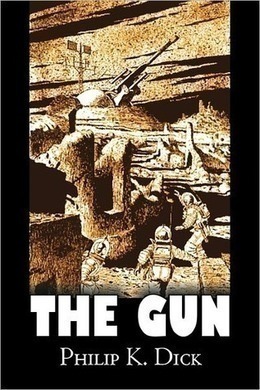 Take an intergalactic trip with renowned science fiction writer Philip K. Dick. In The Gun, the crew of a spaceship are sent out to recover a remarkable weapon that seems to be capable of causing nearly inconceivable levels of damage. How will they protect humanity from the deadly device?

The Captain peered into the eyepiece of the telescope. He adjusted the focus quickly.

“It was an atomic fission we saw, all right,” he said presently. He sighed and pushed the eyepiece away. “Any of you who wants to look may do so. But it’s not a pretty sight.”

“Let me look,” Tance the archeologist said. He bent down to look, squinting. “Good Lord!” He leaped violently back, knocking against Dorle, the Chief Navigator.

“Why did we come all this way, then?” Dorle asked, looking around at the other men. “There’s no point even in landing. Let’s go back at once.”

“Perhaps he’s right,” the biologist murmured. “But I’d like to look for myself, if I may.” He pushed past Tance and peered into the sight.

He saw a vast expanse, an endless surface of gray, stretching to the edge of the planet. At first he thought it was water but after a moment he realized that it was slag, pitted, fused slag, broken only by hills of rock jutting up at intervals. Nothing moved or stirred. Everything was silent, dead.

“I see,” Fomar said, backing away from the eyepiece. “Well, I won’t find any legumes there.” He tried to smile, but his lips stayed unmoved. He stepped away and stood by himself, staring past the others.

“I wonder what the atmospheric sample will show,” Tance said.

“I think I can guess,” the Captain answered. “Most of the atmosphere is poisoned. But didn’t we expect all this? I don’t see why we’re so surprised. A fission visible as far away as our system must be a terrible thing.”

He strode off down the corridor, dignified and expressionless. They watched him disappear into the control room.

As the Captain closed the door the young woman turned. “What did the telescope show? Good or bad?”

“Could they have gone underground?”

The Captain slid back the port window so that the surface of the planet under them was visible. The two of them stared down, silent and disturbed. Mile after mile of unbroken ruin stretched out, blackened slag, pitted and scarred, and occasional heaps of rock.

Suddenly Nasha jumped. “Look! Over there, at the edge. Do you see it?”

They stared. Something rose up, not rock, not an accidental formation. It was round, a circle of dots, white pellets on the dead skin of the planet. A city? Buildings of some kind?

“Please turn the ship,” Nasha said excitedly. She pushed her dark hair from her face. “Turn the ship and let’s see what it is!”

The ship turned, changing its course. As they came over the white dots the Captain lowered the ship, dropping it down as much as he dared. “Piers,” he said. “Piers of some sort of stone. Perhaps poured artificial stone. The remains of a city.”

“Oh, dear,” Nasha murmured. “How awful.” She watched the ruins disappear behind them. In a half-circle the white squares jutted from the slag, chipped and cracked, like broken teeth.

“There’s nothing alive,” the Captain said at last. “I think we’ll go right back; I know most of the crew want to. Get the Government Receiving Station on the sender and tell them what we found, and that we–”