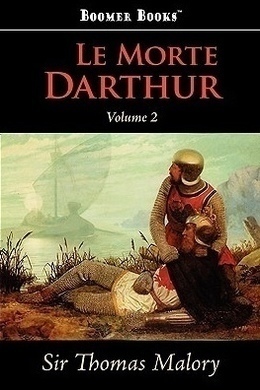 King Arthur and the Legends of the Round Table - Volume 2

The legends of King Arthur and his knights of the Round Table have inspired some of the greatest works of literature–from Cervantes’s Don Quixote to Tennyson’s Idylls of the King. Although many versions exist, Malory’s stands as the classic rendition. Malory wrote the book while in Newgate Prison during the last three years of his life; it was published some fourteen years later, in 1485, by William Caxton. The tales, steeped in the magic of Merlin, the powerful cords of the chivalric code, and the age-old dramas of love and death, resound across the centuries. The stories of King Arthur, Lancelot, Queen Guenever, and Tristram and Isolde seem astonishingly moving and modern. Malory’s Le Morte d’Arthur endures and inspires because it embodies mankind’s deepest yearnings for brotherhood and community, a love worth dying for, and valor, honor, and chivalry. This is volume 2/2 - Volume 1 is available here.

And if so be ye can descrive what ye bear, ye are worthy to bear the arms. As for that, said Sir Tristram, I will answer you; this shield was given me, not desired, of Queen Morgan le Fay; and as for me, I can not descrive these arms, for it is no point of my charge, and yet I trust to God to bear them with worship. Truly, said King Arthur, ye ought not to bear none arms but if ye wist what ye bear: but I pray you tell me your name. To what intent? said Sir Tristram. For I would wit, said Arthur. Sir, ye shall not wit as at this time. Then shall ye and I do battle together, said King Arthur. Why, said Sir Tristram, will ye do battle with me but if I tell you my name? and that little needeth you an ye were a man of worship, for ye have seen me this day have had great travail, and therefore ye are a villainous knight to ask battle of me, considering my great travail; howbeit I will not fail you, and have ye no doubt that I fear not you; though you think you have me at a great advantage yet shall I right well endure you. And there withal King Arthur dressed his shield and his spear, and Sir Tristram against him, and they came so eagerly together. And there King Arthur brake his spear all to pieces upon Sir Tristram’s shield. But Sir Tristram hit Arthur again, that horse and man fell to the earth. And there was King Arthur wounded on the left side, a great wound and a perilous.

Then when Sir Uwaine saw his lord Arthur lie on the ground sore wounded, he was passing heavy. And then he dressed his shield and his spear, and cried aloud unto Sir Tristram and said: Knight, defend thee. So they came together as thunder, and Sir Uwaine brised his spear all to pieces upon Sir Tristram’s shield, and Sir Tristram smote him harder and sorer, with such a might that he bare him clean out of his saddle to the earth. With that Sir Tristram turned about and said: Fair knights, I had no need to joust with you, for I have had enough to do this day. Then arose Arthur and went to Sir Uwaine, and said to Sir Tristram: We have as we have deserved, for through our orgulyté we demanded battle of you, and yet we knew not your name. Nevertheless, by Saint Cross, said Sir Uwaine, he is a strong knight at mine advice as any is now living.

Then Sir Tristram departed, and in every place he asked and demanded after Sir Launcelot, but in no place he could not hear of him whether he were dead or alive; wherefore Sir Tristram made great dole and sorrow. So Sir Tristram rode by a forest, and then was he ware of a fair tower by a marsh on that one side, and on that other side a fair meadow. And there he saw ten knights fighting together. And ever the nearer he came he saw how there was but one knight did battle against nine knights, and that one did so marvellously that Sir Tristram had great wonder that ever one knight might do so great deeds of arms. And then within a little while he had slain half their horses and unhorsed them, and their horses ran in the fields and forest. Then Sir Tristram had so great pity of that one knight that endured so great pain, and ever he thought it should be Sir Palomides, by his shield. And so he rode unto the knights and cried unto them, and bade them cease of their battle, for they did themselves great shame so many knights to fight with one. Then answered the master of those knights, his name was called Breuse Saunce Pité, that was at that time the most mischievoust knight living, and said thus: Sir knight, what have ye ado with us to meddle? and therefore, an ye be wise, depart on your way as ye came, for this knight shall not escape us. That were pity, said Sir Tristram, that so good a knight as he is should be slain so cowardly; and therefore I warn you I will succour him with all my puissance.