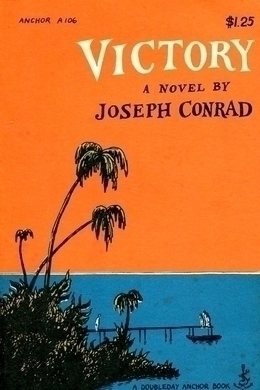 Axel Heyst, a dreamer and a restless drifter, believes he can avoid suffering by cutting himself off from others. Then he becomes involved in the operation of a coal company on a remote island in the Malay Archipelago, and when it fails he turns his back on humanity once more. But his life alters when he rescues a young English girl, Lena, from Zangiacomo’s Ladies’ Orchestra and the evil innkeeper Schomberg, taking her to his island retreat. The affair between Heyst and Lena begins with her release, but the relationship shifts as Lena struggles to save Heyst from the detachment and isolation that have inhibited and influenced his life. Marked by a violent and tragic conclusion, Victory is both a tale of rescue and adventure and a perceptive study of a complex relationship and of the power of love.

There is, as every schoolboy knows in this scientific age, a very close chemical relation between coal and diamonds. It is the reason, I believe, why some people allude to coal as “black diamonds.” Both these commodities represent wealth; but coal is a much less portable form of property. There is, from that point of view, a deplorable lack of concentration in coal. Now, if a coal-mine could be put into one’s waistcoat pocket–but it can’t! At the same time, there is a fascination in coal, the supreme commodity of the age in which we are camped like bewildered travellers in a garish, unrestful hotel. And I suppose those two considerations, the practical and the mystical, prevented Heyst–Axel Heyst–from going away.

The Tropical Belt Coal Company went into liquidation. The world of finance is a mysterious world in which, incredible as the fact may appear, evaporation precedes liquidation. First the capital evaporates, and then the company goes into liquidation. These are very unnatural physics, but they account for the persistent inertia of Heyst, at which we “out there” used to laugh among ourselves–but not inimically. An inert body can do no harm to anyone, provokes no hostility, is scarcely worth derision. It may, indeed, be in the way sometimes; but this could not be said of Axel Heyst. He was out of everybody’s way, as if he were perched on the highest peak of the Himalayas, and in a sense as conspicuous. Everyone in that part of the world knew of him, dwelling on his little island. An island is but the top of a mountain. Axel Heyst, perched on it immovably, was surrounded, instead of the imponderable stormy and transparent ocean of air merging into infinity, by a tepid, shallow sea; a passionless offshoot of the great waters which embrace the continents of this globe. His most frequent visitors were shadows, the shadows of clouds, relieving the monotony of the inanimate, brooding sunshine of the tropics. His nearest neighbour–I am speaking now of things showing some sort of animation–was an indolent volcano which smoked faintly all day with its head just above the northern horizon, and at night levelled at him, from amongst the clear stars, a dull red glow, expanding and collapsing spasmodically like the end of a gigantic cigar puffed at intermittently in the dark. Axel Heyst was also a smoker; and when he lounged out on his veranda with his cheroot, the last thing before going to bed, he made in the night the same sort of glow and of the same size as that other one so many miles away.

In a sense, the volcano was company to him in the shades of the night–which were often too thick, one would think, to let a breath of air through. There was seldom enough wind to blow a feather along. On most evenings of the year Heyst could have sat outside with a naked candle to read one of the books left him by his late father. It was not a mean store. But he never did that. Afraid of mosquitoes, very likely. Neither was he ever tempted by the silence to address any casual remarks to the companion glow of the volcano. He was not mad. Queer chap–yes, that may have been said, and in fact was said; but there is a tremendous difference between the two, you will allow.

On the nights of full moon the silence around Samburan–the “Round Island” of the charts–was dazzling; and in the flood of cold light Heyst could see his immediate surroundings, which had the aspect of an abandoned settlement invaded by the jungle: vague roofs above low vegetation, broken shadows of bamboo fences in the sheen of long grass, something like an overgrown bit of road slanting among ragged thickets towards the shore only a couple of hundred yards away, with a black jetty and a mound of some sort, quite inky on its unlighted side. But the most conspicuous object was a gigantic blackboard raised on two posts and presenting to Heyst, when the moon got over that side, the white letters “T. B. C. Co.” in a row at least two feet high. These were the initials of the Tropical Belt Coal Company, his employers–his late employers, to be precise.

According to the unnatural mysteries of the financial world, the T. B. C. Company’s capital having evaporated in the course of two years, the company went into liquidation–forced, I believe, not voluntary. There was nothing forcible in the process, however. It was slow; and while the liquidation–in London and Amsterdam–pursued its languid course, Axel Heyst, styled in the prospectus “manager in the tropics,” remained at his post on Samburan, the No. 1 coaling-station of the company.