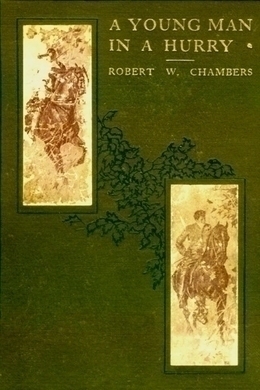 A Young Man in a Hurry

And Other Short Stories

A collection of short stories by Robert W. Chambers, author of The King in Yellow. A collection of light romantic tales in which Chambers’ love of fishing and hunting and natural scenery prevails. The stories are all set in America. A Young Man in a Hurry brings together some of Chambers’ most engrossing shorter pieces.

At ten minutes before five in the evening the office doors of the Florida and Key West Railway Company flew open, and a young man emerged in a hurry.

Suit-case in one hand, umbrella in the other, he sped along the corridor to the elevator-shaft, arriving in time to catch a glimpse of the lighted roof of the cage sliding into depths below.

“Down!” he shouted; but the glimmering cage disappeared, descending until darkness enveloped it.

Then the young man jammed his hat on his head, seized the suit-case and umbrella, and galloped down the steps. The spiral marble staircase echoed his clattering flight; scrub-women heard him coming and fled; he leaped a pail of water and a mop; several old gentlemen flattened themselves against the wall to give him room; and a blond young person with pencils in her hair lisped “Gee!” as he whizzed past and plunged through the storm-doors, which swung back, closing behind him with a hollow thwack.

Outside in the darkness, gray with whirling snowflakes, he saw the wet lamps of cabs shining, and he darted along the line of hansoms and coupés in frantic search for his own.

“Oh, there you are!” he panted, flinging his suit-case up to a snow-covered driver. “Do your best now; we’re late!” And he leaped into the dark coupé, slammed the door, and sank back on the cushions, turning up the collar of his heavy overcoat.

There was a young lady in the farther corner of the cab, buried to her nose in a fur coat. At intervals she shivered and pressed a fluffy muff against her face. A glimmer from the sleet-smeared lamps fell across her knees.

Snow blotted the glass, melting and running down; and over the watery panes yellow light from shop windows played fantastically, distorting vision.

Presently the young man pulled out his watch, fumbled for a match-box, struck a light, and groaned as he read the time.

At the sound of the match striking, the young lady turned her head. Then, as the bright flame illuminated the young man’s face, she sat bolt upright, dropping the muff to her lap with a cry of dismay.

He looked up at her. The match burned his fingers; he dropped it and hurriedly lighted another; and the flickering radiance brightened upon the face of a girl whom he had never before laid eyes on.

The young lady was startled, but resolute. “You have made a dreadful mistake,” she said; “you are in the wrong cab–”

The match went out; there came a brief moment of darkness, then the cab turned a corner, and the ghostly light of electric lamps played over them in quivering succession.

“Will you please stop this cab?” she said, unsteadily. “You have mistaken my cab for yours. I was expecting my brother.”

Stunned, he made no movement to obey. A sudden thrill of fear passed through her.

“I must ask you to stop this cab,” she faltered.

The idiotic blankness of his expression changed to acute alarm.

“Stop this cab?” he cried. “Nothing on earth can induce me to stop this cab!”

“You must!” she insisted, controlling her voice. “You must stop it at once!”

“Do you refuse to leave this cab?”

“I beg that you will compose yourself–”

“Will you go?” she insisted.

A jounce sent them flying towards each other; they collided and recoiled, regarding one another in breathless indignation.

“This is simply hideous!” said the young lady, seizing the door-handle.

“Please don’t open that door!” he said. She tried to wrench it open; the handle stuck–or perhaps the strength had left her wrist. But it was not courage that failed, for she faced him, head held high, and–

Over his face a deep flush burned–and it was a good face, too–youthfully wilful, perhaps, with a firm, clean-cut chin and pleasant eyes.

“If I were a coward,” he said, “I’d stop this cab and get out. I never faced anything that frightened me half as much as you do!”

She looked him straight in the eyes, one hand twisting at the knob.

“Don’t you suppose that this mistake of mine is as humiliating and unwelcome to me as it is to you?” he said. “If you stop this cab it will ruin somebody’s life. Not mine–if it were my own life, I wouldn’t hesitate.”

“You say that you are in a hurry?” she asked, with dry lips.

“A desperate hurry,” he replied.

“So am I,” she said, bitterly; “and, thanks to your stupidity, I must make the journey without my brother!”

There was a silence, then she turned towards him again…