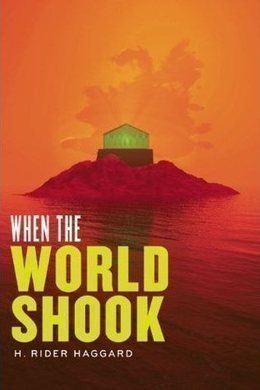 When the World Shook

Being an account of the great adventure of Bastin, Bickley and Arbuthnot

Three Englishmen, marooned on a mysterious South Sea island, learn of the islanders’ powerful god Oro, who has been sleeping for 250,000 years. They manage to wake him, along with his beautiful daughter, who is the spitting image of the hero’s dead wife, while he is a ringer for her lost love. Other residents of an ancient Atlantean civilization are also returned to life in this tale of spirit travel, reincarnation, occult powers, teleportation, a subterranean city, the elixir of life, and considerable mythic depth. One of the last novels from the author of King Solomon’s Mines.

I suppose that I, Humphrey Arbuthnot, should begin this history in which Destiny has caused me to play so prominent a part, with some short account of myself and of my circumstances.

I was born forty years ago in this very Devonshire village in which I write, but not in the same house. Now I live in the Priory, an ancient place and a fine one in its way, with its panelled rooms, its beautiful gardens where, in this mild climate, in addition to our own, flourish so many plants which one would only expect to find in countries that lie nearer to the sun, and its green, undulating park studded with great timber trees. The view, too, is perfect; behind and around the rich Devonshire landscape with its hills and valleys and its scarped faces of red sandstone, and at a distance in front, the sea. There are little towns quite near too, that live for the most part on visitors, but these are so hidden away by the contours of the ground that from the Priory one cannot see them. Such is Fulcombe where I live, though for obvious reasons I do not give it its real name.

Many years ago my father, the Rev. Humphrey Arbuthnot, whose only child I am, after whom also I am named Humphrey, was the vicar of this place with which our family is said to have some rather vague hereditary connection. If so, it was severed in the Carolian times because my ancestors fought on the side of Parliament.

My father was a recluse, and a widower, for my mother, a Scotswoman, died at or shortly after my birth. Being very High Church for those days he was not popular with the family that owned the Priory before me. Indeed its head, a somewhat vulgar person of the name of Enfield who had made money in trade, almost persecuted him, as he was in a position to do, being the local magnate and the owner of the rectorial tithes.

I mention this fact because owing to it as a boy I made up my mind that one day I would buy that place and sit in his seat, a wild enough idea at the time. Yet it became engrained in me, as do such aspirations of our youth, and when the opportunity arose in after years I carried it out. Poor old Enfield! He fell on evil fortunes, for in trying to bolster up a favourite son who was a gambler, a spendthrift, and an ungrateful scamp, in the end he was practically ruined and when the bad times came, was forced to sell the Fulcombe estate. I think of him kindly now, for after all he was good to me and gave me many a day’s shooting and leave to fish for trout in the river.

By the poor people, however, of all the district round, for the parish itself is very small, my father was much beloved, although he did practise confession, wear vestments and set lighted candles on the altar, and was even said to have openly expressed the wish, to which however he never attained, that he could see a censer swinging in the chancel. Indeed the church which, as monks built it, is very large and fine, was always full on Sundays, though many of the worshippers came from far away, some of them doubtless out of curiosity because of its papistical repute, also because, in a learned fashion, my father’s preaching was very good indeed.

For my part I feel that I owe much to these High-Church views. They opened certain doors to me and taught me something of the mysteries which lie at the back of all religions and therefore have their home in the inspired soul of man whence religions are born. Only the pity is that in ninety-nine cases out of a hundred he never discovers, never even guesses at that entombed aspiration, never sinks a shaft down on to this secret but most precious vein of ore.

I have said that my father was learned; but this is a mild description, for never did I know anyone quite so learned. He was one of those men who is so good all round that he became pre-eminent in nothing. A classic of the first water, a very respectable mathematician, an expert in theology, a student of sundry foreign languages and literature in his lighter moments, an inquirer into sociology, a theoretical musician though his playing of the organ excruciated most people because it was too correct, a really first-class authority upon flint instruments and the best grower of garden vegetables in the county, also of apples–such were some of his attainments. That was what made his sermons so popular, since at times one or the other of these subjects would break out into them, his theory being that God spoke to us through all of these things.

But if I began to drift into an analysis of my father’s abilities, I should never stop. It would take a book to describe them. And yet mark this, with them all his name is as dead to the world to-day as though he had never been. Light reflected from a hundred facets dissipates itself in space and is lost; that concentrated in one tremendous ray pierces to the stars.