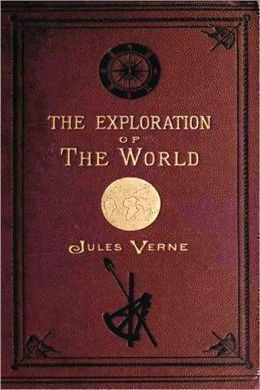 The Exploration of the World

Celebrated Travels and Travellers Part I

In this chief of his works, Jules Verne has set himself to tell the story of all the most stirring adventures of which we have any written record - to give the history, ‘from the time of Hanno and Herodotus down to that of Livingstone and Stanley,’ of those voyages of exploration and discovery which are among the most thrilling episodes in the history of human enterprise. In short, Jules Verne has chosen for his most important book the only subject which he could make surpass his own vivid and realistic stories in absorbing interest; to the treatment of such material he brings all the dash and vivid picturesqueness of his own creations, and it may be imagined that he makes a book worth reading.

The plan of the work is so valuable that it is a matter for surprise, that such a history has never been undertaken before. To trace connectedly the progress of discovery as Jules Verne does, from the time when the world was a very small circle indeed, surrounded by the densest of outer darkness, and when the Carthagenian navigators ventured timidly out of the Mediterranean – is to gain an altogether new idea of the daring and skill that has been expended in this one direction. It is a worthy subject for the most ambitious work of such a writer. Verne obtained all information for the book from the original documents.

The first traveller of whom we have any account in history, is Hanno, who was sent by the Carthaginian senate to colonize some parts of the Western coast of Africa. The account of this expedition was written in the Carthaginian language and afterwards translated into Greek. It is known to us now by the name of the “Periplus of Hanno.” At what period this explorer lived, historians are not agreed, but the most probable account assigns the date B.C. 505 to his exploration of the African coast.

Hanno left Carthage with a fleet of sixty vessels of fifty oars each, carrying 30,000 persons, and provisions for a long voyage. These emigrants, for so we may call them, were destined to people the new towns that the Carthaginians hoped to found on the west coast of Libya, or as we now call it, Africa.

The fleet successfully passed the Pillars of Hercules, the rocks of Gibraltar and Ceuta which command the Strait, and ventured on the Atlantic, taking a southerly course. Two days after passing the Straits, Hanno anchored on the coast, and laid the foundation of the town of Thumiaterion.

Then he put to sea again, and doubling the cape of Soloïs, made fresh discoveries, and advanced to the mouth of a large African river, where he found a tribe of wandering shepherds camping on the banks. He only waited to conclude a treaty of alliance with them, before continuing his voyage southward. He next reached the Island of Cerne, situated in a bay, and measuring five stadia in circumference, or as we should say at the present day, nearly 925 yards. According to Hanno’s own account, this island should be placed, with regard to the Pillars of Hercules, at an equal distance to that which separates these Pillars from Carthage.

They set sail again, and Hanno reached the mouth of the river Chretes, which forms a sort of natural harbour, but as they endeavoured to explore this river, they were assailed with showers of stones from the native negro race, inhabiting the surrounding country, and driven back, and after this inhospitable reception they returned to Cerne. We must not omit to add that Hanno mentions finding large numbers of crocodiles and hippopotami in this river. Twelve days after this unsuccessful expedition, the fleet reached a mountainous region, where fragrant trees and shrubs abounded, and it then entered a vast gulf which terminated in a plain. This region appeared quite calm during the day, but after nightfall it was illumined by tongues of flame, which might have proceeded from fires lighted by the natives, or from the natural ignition of the dry grass when the rainy season was over.

In five days, Hanno doubled the Cape, known as the Hespera Keras, there, according to his own account, “he heard the sound of fifes, cymbals, and tambourines, and the clamour of a multitude of people.” The soothsayers, who accompanied the party of Carthaginian explorers, counselled flight from this land of terrors, and, in obedience to their advice, they set sail again, still taking a southerly course. They arrived at a cape, which, stretching southwards, formed a gulf, called Notu Keras, and, according to M. D’Avezac, this gulf must have been the mouth of the river Ouro, which falls into the Atlantic almost within the Tropic of Cancer. At the lower end of this gulf, they found an island inhabited by a vast number of gorillas, which the Carthaginians mistook for hairy savages. They contrived to get possession of three female gorillas, but were obliged to kill them on account of their great ferocity.

This Notu Keras must have been the extreme limit reached by the Carthaginian explorers, and though some historians incline to the belief that they only went to Bojador, which is two degrees North of the tropics, it is more probable that the former account is the true one, and that Hanno, finding himself short of provisions, returned northwards to Carthage, where he had the account of his voyage engraved in the temple of Baal Moloch.