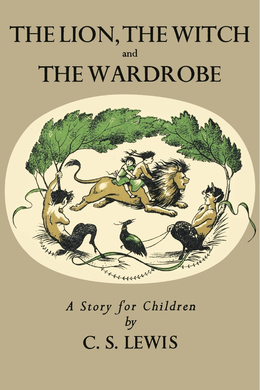 The Lion, the Witch and the Wardrobe

A Story for Children

Narnia…the land beyond the wardrobe, the secret country known only to Peter, Susan, Edmund, and Lucy…the place where the adventure begins. Lucy is the first to find the secret of the wardrobe in the professor’s mysterious old house. At first, no one believes her when she tells of her adventures in the land of Narnia. But soon Edmund and then Peter and Susan discover the Magic and meet Aslan, the Great Lion, for themselves. In the blink of an eye, their lives are changed forever.

Once there were four children whose names were Peter, Susan, Edmund and Lucy. This story is about something that happened to them when they were sent away from London during the war because of the air-raids. They were sent to the house of an old Professor who lived in the heart of the country, ten miles from the nearest railway station and two miles from the nearest post office. He had no wife and he lived in a very large house with a housekeeper called Mrs. Macready and three servants. (Their names were Ivy, Margaret and Betty, but they do not come into the story much.) He himself was a very old man with shaggy white hair, which grew over most of his face as well as on his head, and they liked him almost at once; but on the first evening when he came out to meet them at the front door he was so odd-looking that Lucy (who was the youngest) was a little afraid of him, and Edmund (who was the next youngest) wanted to laugh and had to keep on pretending he was blowing his nose to hide it.

As soon as they had said good night to the Professor and gone upstairs on the first night, the boys came into the girls’ room and they all talked it over.

“We’ve fallen on our feet and no mistake,” said Peter. “This is going to be perfectly splendid. That old chap will let us do anything we like.”

“Oh, come off it!” said Edmund, who was tired and pretending not to be tired, which always made him bad-tempered. “Don’t go on talking like that.”

“Trying to talk like Mother,” said Edmund. “And who are you to say when I’m to go to bed? Go to bed yourself.”

“Hadn’t we all better go to bed?” said Lucy. “There’s sure to be a row if we’re heard talking here.”

“No there won’t,” said Peter. “I tell you this is the sort of house where no one’s going to mind what we do. Anyway, they won’t hear us. It’s about ten minutes’ walk from here down to that dining room, and any amount of stairs and passages in between.”

“What’s that noise?” said Lucy suddenly. It was a far larger house than she had ever been in before and the thought of all those long passages and rows of doors leading into empty rooms was beginning to make her feel a little creepy.

“It’s an owl,” said Peter. “This is going to be a wonderful place for birds. I shall go to bed now. I say, let’s go and explore to-morrow. You might find anything in a place like this. Did you see those mountains as we came along? And the woods? There might be eagles. There might be stags. There’ll be hawks.”

But when next morning came, there was a steady rain falling, so thick that when you looked out of the window you could see neither the mountains nor the woods nor even the stream in the garden.

“Of course it would be raining!” said Edmund. They had just finished breakfast with the Professor and were upstairs in the room he had set apart for them–a long, low room with two windows looking out in one direction and two in another.

“Do stop grumbling, Ed,” said Susan. “Ten to one it’ll clear up in an hour or so. And in the meantime we’re pretty well off. There’s a wireless and lots of books.”

Everyone agreed to this and that was how the adventures began. It was the sort of house that you never seem to come to the end of, and it was full of unexpected places. The first few doors they tried led only into spare bedrooms, as everyone had expected that they would; but soon they came to a very long room full of pictures and there they found a suit of armour; and after that was a room all hung with green, with a harp in one corner; and then came three steps down and five steps up, and then a kind of little upstairs hall and a door that led out onto a balcony, and then a whole series of rooms that led into each other and were lined with books–most of them very old books and some bigger than a Bible in a church. And shortly after that they looked into a room that was quite empty except for one big wardrobe; the sort that has a looking-glass in the door. There was nothing else in the room at all except a dead blue-bottle on the window-sill.

“Nothing there!” said Peter, and they all trooped out again–all except Lucy. She stayed behind because she thought it would be worth while trying the door of the wardrobe, even though she felt almost sure that it would be locked. To her surprise it opened quite easily, and two moth-balls dropped out.