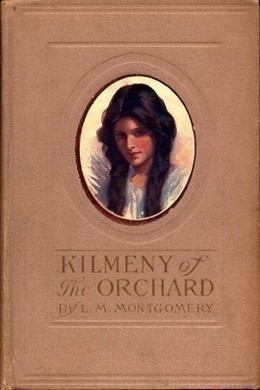 Kilmeny of the Orchard

When twenty-four-year-old Eric Marshall arrives on Prince Edward Island to become a substitute schoolmaster, he has a bright future in his wealthy family’s business. Eric has taken the two-month teaching post only as a favor to a friend – but fate throws in his path a beautiful, mysterious girl named Kilmeny Gordon. With jet black hair and sea blue eyes, Kilmeny immediately captures Eric’s heart. But Kilmeny cannot speak, and Eric is concerned for and bewitched by this shy, sensitive mute girl. For the first time in his life Eric must work hard for something he wants badly. And there is nothing he wants more than for Kilmeny to return his love.

The sunshine of a day in early spring, honey pale and honey sweet, was showering over the red brick buildings of Queenslea College and the grounds about them, throwing through the bare, budding maples and elms, delicate, evasive etchings of gold and brown on the paths, and coaxing into life the daffodils that were peering greenly and perkily up under the windows of the co-eds’ dressing-room.

A young April wind, as fresh and sweet as if it had been blowing over the fields of memory instead of through dingy streets, was purring in the tree-tops and whipping the loose tendrils of the ivy network which covered the front of the main building. It was a wind that sang of many things, but what it sang to each listener was only what was in that listener’s heart. To the college students who had just been capped and diplomad by “Old Charlie,” the grave president of Queenslea, in the presence of an admiring throng of parents and sisters, sweethearts and friends, it sang, perchance, of glad hope and shining success and high achievement. It sang of the dreams of youth that may never be quite fulfilled, but are well worth the dreaming for all that. God help the man who has never known such dreams–who, as he leaves his alma mater, is not already rich in aerial castles, the proprietor of many a spacious estate in Spain. He has missed his birthright.

The crowd streamed out of the entrance hall and scattered over the campus, fraying off into the many streets beyond. Eric Marshall and David Baker walked away together. The former had graduated in Arts that day at the head of his class; the latter had come to see the graduation, nearly bursting with pride in Eric’s success.

Between these two was an old and tried and enduring friendship, although David was ten years older than Eric, as the mere tale of years goes, and a hundred years older in knowledge of the struggles and difficulties of life which age a man far more quickly and effectually than the passing of time.

Physically the two men bore no resemblance to one another, although they were second cousins. Eric Marshall, tall, broad-shouldered, sinewy, walking with a free, easy stride, which was somehow suggestive of reserve strength and power, was one of those men regarding whom less-favoured mortals are tempted seriously to wonder why all the gifts of fortune should be showered on one individual. He was not only clever and good to look upon, but he possessed that indefinable charm of personality which is quite independent of physical beauty or mental ability. He had steady, grayish-blue eyes, dark chestnut hair with a glint of gold in its waves when the sunlight struck it, and a chin that gave the world assurance of a chin. He was a rich man’s son, with a clean young manhood behind him and splendid prospects before him. He was considered a practical sort of fellow, utterly guiltless of romantic dreams and visions of any sort.

“I am afraid Eric Marshall will never do one quixotic thing,” said a Queenslea professor, who had a habit of uttering rather mysterious epigrams, “but if he ever does it will supply the one thing lacking in him.”

David Baker was a short, stocky fellow with an ugly, irregular, charming face; his eyes were brown and keen and secretive; his mouth had a comical twist which became sarcastic, or teasing, or winning, as he willed. His voice was generally as soft and musical as a woman’s; but some few who had seen David Baker righteously angry and heard the tones which then issued from his lips were in no hurry to have the experience repeated.

He was a doctor–a specialist in troubles of the throat and voice–and he was beginning to have a national reputation. He was on the staff of the Queenslea Medical College and it was whispered that before long he would be called to fill an important vacancy at McGill.

He had won his way to success through difficulties and drawbacks which would have daunted most men. In the year Eric was born David Baker was an errand boy in the big department store of Marshall & Company. Thirteen years later he graduated with high honors from Queenslea Medical College. Mr. Marshall had given him all the help which David’s sturdy pride could be induced to accept, and now he insisted on sending the young man abroad for a post-graduate course in London and Germany. David Baker had eventually repaid every cent Mr. Marshall had expended on him; but he never ceased to cherish a passionate gratitude to the kind and generous man; and he loved that man’s son with a love surpassing that of brothers.

He had followed Eric’s college course with keen, watchful interest. It was his wish that Eric should take up the study of law or medicine now that he was through Arts; and he was greatly disappointed that Eric should have finally made up his mind to go into business with his father.