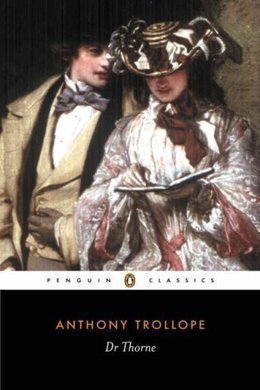 Doctor Thorne is the third novel in the Barchester series. Doctor Thorne adopts his niece Mary, keeping secret her illegitimate birth as he introduces her to the best local social circles. There she meets and falls in love with Frank Gresham, heir to a vastly mortgaged estate; yet Frank is obliged to find a wealthy wife, jeopardizing Mary’s happiness until fate extends an obliging hand. Where fiery passion fails, understated English virtues of patience, persistence and good humor could yet prevail in this most appealing of Trollope’s comedies.

Before the reader is introduced to the modest country medical practitioner who is to be the chief personage of the following tale, it will be well that he should be made acquainted with some particulars as to the locality in which, and the neighbours among whom, our doctor followed his profession.

There is a county in the west of England not so full of life, indeed, nor so widely spoken of as some of its manufacturing leviathan brethren in the north, but which is, nevertheless, very dear to those who know it well. Its green pastures, its waving wheat, its deep and shady and–let us add–dirty lanes, its paths and stiles, its tawny-coloured, well-built rural churches, its avenues of beeches, and frequent Tudor mansions, its constant county hunt, its social graces, and the general air of clanship which pervades it, has made it to its own inhabitants a favoured land of Goshen. It is purely agricultural; agricultural in its produce, agricultural in its poor, and agricultural in its pleasures. There are towns in it, of course; dépôts from whence are brought seeds and groceries, ribbons and fire-shovels; in which markets are held and county balls are carried on; which return members to Parliament, generally–in spite of Reform Bills, past, present, and coming–in accordance with the dictates of some neighbouring land magnate: from whence emanate the country postmen, and where is located the supply of post-horses necessary for county visitings. But these towns add nothing to the importance of the county; they consist, with the exception of the assize town, of dull, all but death-like single streets. Each possesses two pumps, three hotels, ten shops, fifteen beer-houses, a beadle, and a market-place.

Indeed, the town population of the county reckons for nothing when the importance of the county is discussed, with the exception, as before said, of the assize town, which is also a cathedral city. Herein is a clerical aristocracy, which is certainly not without its due weight. A resident bishop, a resident dean, an archdeacon, three or four resident prebendaries, and all their numerous chaplains, vicars, and ecclesiastical satellites, do make up a society sufficiently powerful to be counted as something by the county squirearchy. In other respects the greatness of Barsetshire depends wholly on the landed powers.

Barsetshire, however, is not now so essentially one whole as it was before the Reform Bill divided it. There is in these days an East Barsetshire, and there is a West Barsetshire; and people conversant with Barsetshire doings declare that they can already decipher some difference of feeling, some division of interests. The eastern moiety of the county is more purely Conservative than the western; there is, or was, a taint of Peelism in the latter; and then, too, the residence of two such great Whig magnates as the Duke of Omnium and the Earl de Courcy in that locality in some degree overshadows and renders less influential the gentlemen who live near them.

It is to East Barsetshire that we are called. When the division above spoken of was first contemplated, in those stormy days in which gallant men were still combatting reform ministers, if not with hope, still with spirit, the battle was fought by none more bravely than by John Newbold Gresham of Greshamsbury, the member for Barsetshire. Fate, however, and the Duke of Wellington were adverse, and in the following Parliament John Newbold Gresham was only member for East Barsetshire.

Whether or not it was true, as stated at the time, that the aspect of the men with whom he was called on to associate at St Stephen’s broke his heart, it is not for us now to inquire. It is certainly true that he did not live to see the first year of the reformed Parliament brought to a close. The then Mr Gresham was not an old man at the time of his death, and his eldest son, Francis Newbold Gresham, was a very young man; but, notwithstanding his youth, and notwithstanding other grounds of objection which stood in the way of such preferment, and which must be explained, he was chosen in his father’s place. The father’s services had been too recent, too well appreciated, too thoroughly in unison with the feelings of those around him to allow of any other choice; and in this way young Frank Gresham found himself member for East Barsetshire, although the very men who elected him knew that they had but slender ground for trusting him with their suffrages.