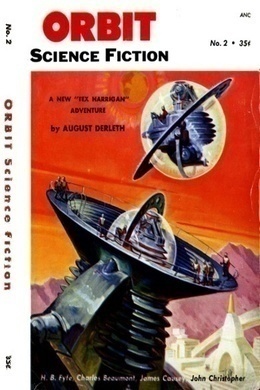 Tony and the Beetles

Far in the future, Earth’s empire has grown to include dozens of different civilizations, many of which have been subjugated to serve humanity’s growing need for cheap labor. In the short story Tony and the Beetles, a young boy hatches an unlikely friendship with some of the insect-like creatures that are treated as slaves – and sets off a firestorm of unintended consequences in the process.

Reddish-yellow sunlight filtered through the thick quartz windows into the sleep-compartment. Tony Rossi yawned, stirred a little, then opened his black eyes and sat up quickly. With one motion he tossed the covers back and slid to the warm metal floor. He clicked off his alarm clock and hurried to the closet.

It looked like a nice day. The landscape outside was motionless, undisturbed by winds or dust-shift. The boy’s heart pounded excitedly. He pulled his trousers on, zipped up the reinforced mesh, struggled into his heavy canvas shirt, and then sat down on the edge of the cot to tug on his boots. He closed the seams around their tops and then did the same with his gloves. Next he adjusted the pressure on his pump unit and strapped it between his shoulder blades. He grabbed his helmet from the dresser, and he was ready for the day.

In the dining-compartment his mother and father had finished breakfast. Their voices drifted to him as he clattered down the ramp. A disturbed murmur; he paused to listen. What were they talking about? Had he done something wrong, again?

And then he caught it. Behind their voices was another voice. Static and crackling pops. The all-system audio signal from Rigel IV. They had it turned up full blast; the dull thunder of the monitor’s voice boomed loudly. The war. Always the war. He sighed, and stepped out into the dining-compartment.

“Good morning, dear,” his mother said absently. She sat with her head turned to one side, wrinkles of concentration webbing her forehead. Her thin lips were drawn together in a tight line of concern. His father had pushed his dirty dishes back and was smoking, elbows on the table, dark hairy arms bare and muscular. He was scowling, intent on the jumbled roar from the speaker above the sink.

“How’s it going?” Tony asked. He slid into his chair and reached automatically for the ersatz grapefruit. “Any news from Orion?”

Neither of them answered. They didn’t hear him. He began to eat his grapefruit. Outside, beyond the little metal and plastic housing unit, sounds of activity grew. Shouts and muffled crashes, as rural merchants and their trucks rumbled along the highway toward Karnet. The reddish daylight swelled; Betelgeuse was rising quietly and majestically.

“Nice day,” Tony said. “No flux wind. I think I’ll go down to the n-quarter awhile. We’re building a neat spaceport, a model, of course, but we’ve been able to get enough materials to lay out strips for–”

With a savage snarl his father reached out and struck the audio roar immediately died. “I knew it!” He got up and moved angrily away from the table. “I told them it would happen. They shouldn’t have moved so soon. Should have built up Class A supply bases, first.”

“Isn’t our main fleet moving in from Bellatrix?” Tony’s mother fluttered anxiously. “According to last night’s summary the worst that can happen is Orion IX and X will be dumped.”

Joseph Rossi laughed harshly. “The hell with last night’s summary. They know as well as I do what’s happening.”

“What’s happening?” Tony echoed, as he pushed aside his grapefruit and began to ladle out dry cereal. “Are we losing the battle?”

“Yes!” His father’s lips twisted. “Earthmen, losing to–to beetles. I told them. But they couldn’t wait. My God, there’s ten good years left in this system. Why’d they have to push on? Everybody knew Orion would be tough. The whole damn beetle fleet’s strung out around there. Waiting for us. And we have to barge right in.”

“But nobody ever thought beetles would fight,” Leah Rossi protested mildly. “Everybody thought they’d just fire a few blasts and then–”

“They have to fight! Orion’s the last jump-off. If they don’t fight here, where the hell can they fight?” Rossi swore savagely. “Of course they’re fighting. We have all their planets except the inner Orion string–not that they’re worth much, but it’s the principle of the thing. If we’d built up strong supply bases, we could have broken up the beetle fleet and really clobbered it.”

“Don’t say ‘beetle,’” Tony murmured, as he finished his cereal. “They’re Pas-udeti, same as here. The word ‘beetle’ comes from Betelgeuse. An Arabian word we invented ourselves.”

Joe Rossi’s mouth opened and closed. “What are you, a goddamn beetle-lover?”

Rossi moved toward the door. “If I was ten years younger I’d be out there. I’d really show those shiny-shelled insects what the hell they’re up against. Them and their junky beat-up old hulks. Converted freighters!” His eyes blazed. “When I think of them shooting down Terran cruisers with our boys in them–”