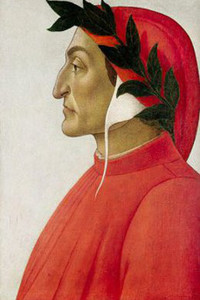 Dante Alighieri, commonly known as Dante, was an Italian poet of the Middle Ages. He was born in Florence. He died and is buried in Ravenna. The name Dante is, according to the words of Jacopo Alighieri, a hypocorism for Durante. In contemporary documents it is followed by the patronymic Alagherii or de Alagheriis; it was Boccaccio who popularized the form Alighieri. In Italy he is known as “the Supreme Poet” (il Sommo Poeta) or just il Poeta. Dante, Petrarch and Boccaccio are also known as “the three fountains” or “the three crowns”. Dante is also called the “Father of the Italian language”.

The first part of Dante’s Divine Comedy (translated by Henry Francis Cary), the “Inferno” (or “Hell”) begins on the night before Good Friday in the year...read more »

The final volume of Dante’s, Divine Comedy; Paradise. Having plunged to the uttermost depths of Hell and climbed the Mount of Purgatory, Dante ascends t...read more »

The second volume of the Divine Comedy presents the Purgatory. Continuing the story of the poet’s journey through the medieval Other World under the gui...read more »