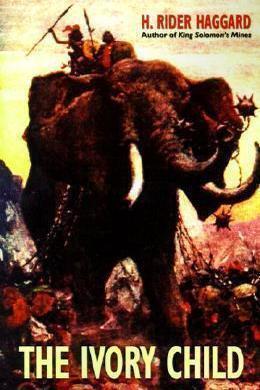 Get set for adventure with this rip-roaring tale from action-fantasy master H. Rider Haggard. The Ivory Child sees intrepid explorer Allan Quatermain venturing into unknown territory to rescue a kidnapping victim. Along the way, he inadvertently stumbles into an array of thorny situations, including a tribal civil war. Will Quatermain triumph and make it back alive?

Now I, Allan Quatermain, come to the story of what was, perhaps, one of the strangest of all the adventures which have befallen me in the course of a life that so far can scarcely be called tame or humdrum.

Amongst many other things it tells of the war against the Black Kendah people and the dead of Jana, their elephant god. Often since then I have wondered if this creature was or was not anything more than a mere gigantic beast of the forest. It seems improbable, even impossible, but the reader of future days may judge of this matter for himself.

Also he can form his opinion as to the religion of the White Kendah and their pretensions to a certain degree of magical skill. Of this magic I will make only one remark: If it existed at all, it was by no means infallible. To take a single instance, Harût and Marût were convinced by divination that I, and I only, could kill Jana, which was why they invited me to Kendahland. Yet in the end it was Hans who killed him. Jana nearly killed me!

Now to my tale.

In another history, called “The Holy Flower,” I have told how I came to England with a young gentleman of the name of Scroope, partly to see him safely home after a hunting accident, and partly to try to dispose of a unique orchid for a friend of mine called Brother John by the white people, and Dogeetah by the natives, who was popularly supposed to be mad, but, in fact, was very sane indeed. So sane was he that he pursued what seemed to be an absolutely desperate quest for over twenty years, until, with some humble assistance on my part, he brought it to a curiously successful issue. But all this tale is told in “The Holy Flower,” and I only allude to it here, that is at present, to explain how I came to be in England.

While in this country I stayed for a few days with Scroope, or, rather, with his fiancée and her people, at a fine house in Essex. (I called it Essex to avoid the place being identified, but really it was one of the neighbouring counties.) During my visit I was taken to see a much finer place, a splendid old castle with brick gateway towers, that had been wonderfully well restored and turned into a most luxurious modern dwelling. Let us call it “Ragnall,” the seat of a baron of that name.

I had heard a good deal about Lord Ragnall, who, according to all accounts, seemed a kind of Admirable Crichton. He was said to be wonderfully handsome, a great scholar–he had taken a double first at college; a great athlete–he had been captain of the Oxford boat at the University race; a very promising speaker who had already made his mark in the House of Lords; a sportsman who had shot tigers and other large game in India; a poet who had published a successful volume of verse under a pseudonym; a good solider until he left the Service; and lastly, a man of enormous wealth, owning, in addition to his estates, several coal mines and an entire town in the north of England.

“Dear me!” I said when the list was finished, “he seems to have been born with a whole case of gold spoons in his mouth. I hope one of them will not choke him,” adding: “Perhaps he will be unlucky in love.”

“That’s just where he is most lucky of all,” answered the young lady to whom I was talking–it was Scroope’s fiancée, Miss Manners–“for he is engaged to a lady that, I am told, is the loveliest, sweetest, cleverest girl in all England, and they absolutely adore each other.”

“Dear me!” I repeated. “I wonder what Fate has got up its sleeve for Lord Ragnall and his perfect lady-love?”

I was doomed to find out one day.

So it came about that when, on the following morning, I was asked if I would like to see the wonders of Ragnall Castle, I answered “Yes.” Really, however, I wanted to have a look at Lord Ragnall himself, if possible, for the account of his many perfections had impressed the imagination of a poor colonist like myself, who had never found an opportunity of setting his eyes upon a kind of human angel. Human devils I had met in plenty, but never a single angel–at least, of the male sex. Also there was always the possibility that I might get a glimpse of the still more angelic lady to whom he was engaged, whose name, I understood, was the Hon. Miss Holmes. So I said that nothing would please me more than to see this castle.

Thither we drove accordingly through the fine, frosty air, for the month was December. On reaching the castle, Mr. Scroope was told that Lord Ragnall, whom he knew well, was out shooting somewhere in the park, but that, of course, he could show his friend over the place. So we went in, the three of us, for Miss Manners, to whom Scroope was to be married very shortly, had driven us over in her pony carriage. The porter at the gateway towers took us to the main door of the castle and handed us over to another man, whom he addressed as Mr. Savage, whispering to me that he was his lordship’s personal attendant.