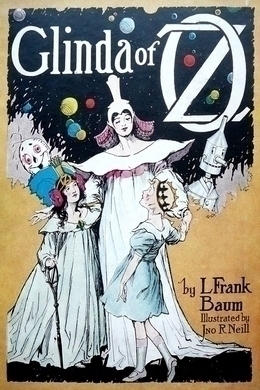 Peace, prosperity, and happiness are the rule in the marvelous Land of Oz, but in a faraway corner of this magical domain dwell two tribes–the Flatheads and the Skeezers–who have declared war on each other. Determined to keep her subjects from fighting, the Ruler of Oz, Princess Ozma, along with her dearest friend, Princess Dorothy Gale (formerly of Kansas), embarks on a quest to restore peace.When the Supreme Dictator of the Flatheads refuses to cooperate with Ozma, she and Dorothy seek out Queen Coo-ee-oh of the Skeezers, hoping she will be more reasonable. But the queen imprisons Ozma and Dorothy in her grand city and then traps them by submerging the whole city under water. Now it is up to Glinda the Good to save the day. She assembles all of Ozma’s counsellors–including such beloved Oz friends as the Scarecrow, Tin Woodman, Cowardly Lion, Patchwork Girl, Shaggy Man, Tik-Tok, and Wizard of Oz–and they set out to rescue their friends. Will the magic powers of Glinda and the Wizard combined be enough to free Ozma and Dorothy?

Glinda, the good Sorceress of Oz, sat in the grand court of her palace, surrounded by her maids of honor–a hundred of the most beautiful girls of the Fairyland of Oz. The palace court was built of rare marbles, exquisitely polished. Fountains tinkled musically here and there; the vast colonnade, open to the south, allowed the maidens, as they raised their heads from their embroideries, to gaze upon a vista of rose-hued fields and groves of trees bearing fruits or laden with sweet-scented flowers. At times one of the girls would start a song, the others joining in the chorus, or one would rise and dance, gracefully swaying to the music of a harp played by a companion. And then Glinda smiled, glad to see her maids mixing play with work.

Presently among the fields an object was seen moving, threading the broad path that led to the castle gate. Some of the girls looked upon this object enviously; the Sorceress merely gave it a glance and nodded her stately head as if pleased, for it meant the coming of her friend and mistress–the only one in all the land that Glinda bowed to.

Then up the path trotted a wooden animal attached to a red wagon, and as the quaint steed halted at the gate there descended from the wagon two young girls, Ozma, Ruler of Oz, and her companion, Princess Dorothy. Both were dressed in simple white muslin gowns, and as they ran up the marble steps of the palace they laughed and chatted as gaily as if they were not the most important persons in the world’s loveliest fairyland.

The maids of honor had risen and stood with bowed heads to greet the royal Ozma, while Glinda came forward with outstretched arms to greet her guests.

“We’ve just come on a visit, you know,” said Ozma. “Both Dorothy and I were wondering how we should pass the day when we happened to think we’d not been to your Quadling Country for weeks, so we took the Sawhorse and rode straight here.”

“And we came so fast,” added Dorothy, “that our hair is blown all fuzzy, for the Sawhorse makes a wind of his own. Usually it’s a day’s journey from the Em’rald City, but I don’t s’pose we were two hours on the way.”

“You are most welcome,” said Glinda the Sorceress, and led them through the court to her magnificent reception hall. Ozma took the arm of her hostess, but Dorothy lagged behind, kissing some of the maids she knew best, talking with others, and making them all feel that she was their friend. When at last she joined Glinda and Ozma in the reception hall, she found them talking earnestly about the condition of the people, and how to make them more happy and contented–although they were already the happiest and most contented folks in all the world.

This interested Ozma, of course, but it didn’t interest Dorothy very much, so the little girl ran over to a big table on which was lying open Glinda’s Great Book of Records.

This Book is one of the greatest treasures in Oz, and the Sorceress prizes it more highly than any of her magical possessions. That is the reason it is firmly attached to the big marble table by means of golden chains, and whenever Glinda leaves home she locks the Great Book together with five jeweled padlocks, and carries the keys safely hidden in her bosom.

I do not suppose there is any magical thing in any fairyland to compare with the Record Book, on the pages of which are constantly being printed a record of every event that happens in any part of the world, at exactly the moment it happens. And the records are always truthful, although sometimes they do not give as many details as one could wish. But then, lots of things happen, and so the records have to be brief or even Glinda’s Great Book could not hold them all.

Glinda looked at the records several times each day, and Dorothy, whenever she visited the Sorceress, loved to look in the Book and see what was happening everywhere. Not much was recorded about the Land of Oz, which is usually peaceful and uneventful, but today Dorothy found something which interested her. Indeed, the printed letters were appearing on the page even while she looked.

“This is funny!” she exclaimed. “Did you know, Ozma, that there were people in your Land of Oz called Skeezers?”

“Yes,” replied Ozma, coming to her side, “I know that on Professor Wogglebug’s Map of the Land of Oz there is a place marked ‘Skeezer,’ but what the Skeezers are like I do not know. No one I know has ever seen them or heard of them. The Skeezer Country is ‘way at the upper edge of the Gillikin Country, with the sandy, impassable desert on one side and the mountains of Oogaboo on another side. That is a part of the Land of Oz of which I know very little.”

“I guess no one else knows much about it either, unless it’s the Skeezers themselves,” remarked Dorothy. “But the Book says: ‘The Skeezers of Oz have declared war on the Flatheads of Oz, and there is likely to be fighting and much trouble as the result.’”