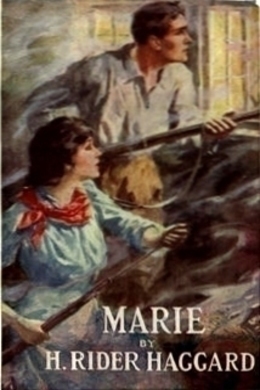 An Episode in The Life of the late Allan Quatermain

Before there was Indiana Jones there was Allan Quartermain: the original explorer, treasure hunter, and adventurer. The Quartermain books have captivated readers for more than a century, spawning more than a dozen movies and a host of imitators. Here is the story of Allan’s first true love, Marie Marais. Famed explorer Allan Quatermain finds himself facing down the most formidable adversary he has ever encountered: an irresistible woman for whom he is willing to fight to the death. The Marie of the title eventually wins the upper hand, and Quatermain makes her his wife. Will the pair beat the odds and live happily ever after?

Although in my old age I, Allan Quatermain, have taken to writing–after a fashion–never yet have I set down a single word of the tale of my first love and of the adventures that are grouped around her beautiful and tragic history. I suppose this is because it has always seemed to me too holy and far-off a matter–as holy and far-off as is that heaven which holds the splendid spirit of Marie Marais. But now, in my age, that which was far-off draws near again; and at night, in the depths between the stars, sometimes I seem to see the opening doors through which I must pass, and leaning earthwards across their threshold, with outstretched arms and dark and dewy eyes, a shadow long forgotten by all save me–the shadow of Marie Marais.

An old man’s dream, doubtless, no more. Still, I will try to set down that history which ended in so great a sacrifice, and one so worthy of record, though I hope that no human eye will read it until I also am forgotten, or, at any rate, have grown dim in the gathering mists of oblivion. And I am glad that I have waited to make this attempt, for it seems to me that only of late have I come to understand and appreciate at its true value the character of her of whom I tell, and the passionate affection which was her bounteous offering to one so utterly unworthy as myself. What have I done, I wonder, that to me should have been decreed the love of two such women as Marie and that of Stella, also now long dead, to whom alone in the world I told all her tale? I remember I feared lest she should take it ill, but this was not so. Indeed, during our brief married days, she thought and talked much of Marie, and some of her last words to me were that she was going to seek her, and that they would wait for me together in the land of love, pure and immortal.

So with Stella’s death all that side of life came to an end for me, since during the long years which stretch between then and now I have never said another tender word to woman. I admit, however, that once, long afterwards, a certain little witch of a Zulu did say tender words to me, and for an hour or so almost turned my head, an art in which she had great skill. This I say because I wish to be quite honest, although it–I mean my head, for there was no heart involved in the matter–came straight again at once. Her name was Mameena, and I have set down her remarkable story elsewhere.

To return. As I have already written in another book, I passed my youth with my old father, a Church of England clergyman, in what is now the Cradock district of the Cape Colony.

Then it was a wild place enough, with a very small white population. Among our few neighbours was a Boer farmer of the name of Henri Marais, who lived about fifteen miles from our station, on a fine farm called Maraisfontein. I say he was a Boer, but, as may be guessed from both his Christian and surname, his origin was Huguenot, his forefather, who was also named Henri Marais–though I think the Marais was spelt rather differently then–having been one of the first of that faith who emigrated to South Africa to escape the cruelties of Louis XIV. at the time of the revocation of the Edict of Nantes.

Unlike most Boers of similar descent, these particular Marais–for, of course, there are many other families so called–never forgot their origin. Indeed, from father to son, they kept up some knowledge of the French tongue, and among themselves often spoke it after a fashion. At any rate, it was the habit of Henri Marais, who was excessively religious, to read his chapter of the Bible (which it is, or was, the custom of the Boers to spell out every morning, should their learning allow them to do so), not in the “taal” or patois Dutch, but in good old French. I have the very book from which he used to read now, for, curiously enough, in after years, when all these events had long been gathered to the past, I chanced to buy it among a parcel of other works at the weekly auction of odds and ends on the market square of Maritzburg. I remember that when I opened the great tome, bound over the original leather boards in buckskin, and discovered to whom it had belonged, I burst into tears. There was no doubt about it, for, as was customary in old days, this Bible had sundry fly-leaves sewn up with it for the purpose of the recording of events important to its owner.