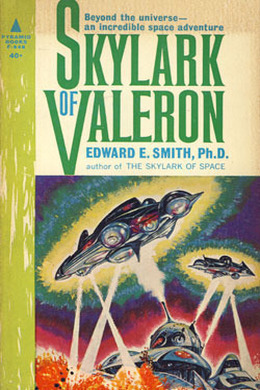 Our hero’s family are in deep space when they are attacked by the intellectuals. In order to survive the attack they rotate into the 4th dimension and are captured. They must make it back to 3space and find their way home. Unfortunately they find themselves hopelessly lost but are able to save another race and make their way home! As the mighty spaceship Skylark roved the intergalactic void, scientist Richard Seaton and his companions uncovered a world of disembodied intelligences. A world of four dimensions where time was insanely distorted and matter obeyed no terrestrial laws…where three-dimensional intellects were barely sufficient to thwart invisible mentalities!

Day after day a spherical space-ship of Arenak tore through the illimitable reaches of the interstellar void. She had once been a war vessel of Osnome; now, rechristened the Violet, she was bearing two Tellurians and a Fenachrone—Dr. Marc C. DuQuesne of World Steel, “Baby Doll” Loring, his versatile and accomplished assistant, and the squat and monstrous engineer of the flagship Y427W—from the Green system toward the solar system of the Fenachrone. The mid-point of the stupendous flight had long since been passed; the Violet had long been braking down with a negative acceleration of five times the velocity of light.

Much to the surprise of both DuQuesne and Loring, their prisoner had not made the slightest move against them. He had thrown all the strength of his supernaturally powerful body and all the resources of his gigantic brain into the task of converting the atomic motors of the Violet into the space- annihilating drive of his own race. This drive, affecting alike as it does every atom of substance within the radius of action of the power bar, entirely nullifies the effect of acceleration, so that the passengers feel no motion whatever, even when the craft is accelerating at maximum.

The engineer had not shirked a single task, however arduous. And, once under way, he had nursed those motors along with every artifice known to his knowing clan; he had performed such prodigies of adjustment and tuning as to raise by a full two per cent their already inconceivable maximum acceleration. Nor was this all. After the first moment of rebellion, he did not even once attempt to bring to bear the almost irresistible hypnotic power of his eyes; the immense, cold, ruby-lighted projectors of mental energy which, both men knew, were awful weapons indeed. Nor did he even once protest against the attractors which were set upon his giant limbs.

Immaterial bands, these, whose slight force could not be felt unless the captor so willed. But let the prisoner make one false move, and those tiny beams of force would instantly become copper-driven rods of pure energy, hurling the luckless wight against the wall of the control room and holding him motionless there, in spite of the most terrific exertions of his mighty body.

DuQuesne lay at ease in his seat; or rather, scarcely touching the seat, he floated at ease in the air above it. His black brows were drawn together, his black eyes were hard as he studied frowningly the Fenachrone engineer. As usual, that worthy was half inside the power plant, coaxing those mighty engines to do even better than their prodigious best.

Feeling his companion’s eyes upon him, the doctor turned his inscrutable stare upon Loring, who had been studying his chief even as DuQuesne had been studying the outlander. Loring’s cherubic countenance was as pinkly innocent as ever, his guileless blue eyes as calm and untroubled; but DuQuesne, knowing the man as he did, perceived an almost imperceptible tension and knew that the killer also was worried.

“What’s the matter, Doll?” The saturnine scientist smiled mirthlessly. “Afraid I’m going to let that ape slip one over on us?”

“Not exactly.” Loring’s slight tenseness, however, disappeared. “It’s your party, and anything that’s all right with you tickles me half to death. I have known all along you knew that that bird there isn’t working under compulsion. You know as well as I do that nobody works that way because they’re made to. He’s working for himself, not for us, and I had just begun to wonder if you weren’t getting a little late in clamping down on him.”

“Not at all—there are good and sufficient reasons for this apparent delay. I am going to clamp down on him in exactly”—DuQuesne glanced at his wrist watch—”fourteen minutes. But you’re keen—you’ve got a brain that really works—maybe I’d better give you the whole picture.”

DuQuesne, approving thoroughly of his iron-nerved, cold-blooded assistant, voiced again the thought he had expressed once before, a few hours out from Earth; and Loring answered as he had then, in almost the same words— words which revealed truly the nature of the man:

“Just as you like. Usually I don’t want to know anything about anything, because what a man doesn’t know he can’t be accused of spilling. Out here, though, maybe I should know enough about things to act intelligently in case of a jam. But you’re the doctor—if you’d rather keep it under your hat, that’s all right with me, too. As I’ve said before, it’s your party.”

“Yes; he certainly is working for himself.” DuQuesne scowled blackly. “Or, rather, he thinks he is. You know I read his mind back there, while he was unconscious. I didn’t get all I wanted to, by any means—he woke up too soon but I got a lot more than he thinks I did.