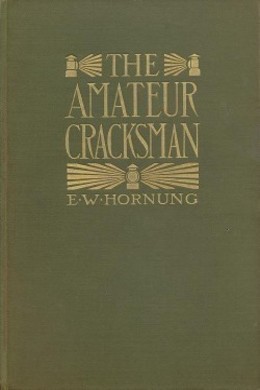 Gentleman thief Raffles is daring, debonair, devilishly handsome-and a first-rate cricketer. In these eight stories, the master burglar indulges his passion for cricket and crime: stealing jewels from a country house, outwitting the law, pilfering from the nouveau riche, and, of course, bowling like a demon-all with the assistance of his plucky sidekick, Bunny. Encouraged by his brother-in-law, Arthur Conan Doyle, to write a series about a public school villain, and influenced by his own experiences at Uppingham, E. W. Hornung created a unique form of crime story, where, in stealing as in sport, it is playing the game that counts, and there is always honor among thieves.

It was half-past twelve when I returned to the Albany as a last desperate resort. The scene of my disaster was much as I had left it. The baccarat-counters still strewed the table, with the empty glasses and the loaded ash-trays. A window had been opened to let the smoke out, and was letting in the fog instead. Raffles himself had merely discarded his dining jacket for one of his innumerable blazers. Yet he arched his eyebrows as though I had dragged him from his bed.

“Forgotten something?” said he, when he saw me on his mat.

“No,” said I, pushing past him without ceremony. And I led the way into his room with an impudence amazing to myself.

“Not come back for your revenge, have you? Because I’m afraid I can’t give it to you single-handed. I was sorry myself that the others–”

We were face to face by his fireside, and I cut him short.

“Raffles,” said I, “you may well be surprised at my coming back in this way and at this hour. I hardly know you. I was never in your rooms before to-night. But I fagged for you at school, and you said you remembered me. Of course that’s no excuse; but will you listen to me–for two minutes?”

In my emotion I had at first to struggle for every word; but his face reassured me as I went on, and I was not mistaken in its expression.

“Certainly, my dear man,” said he; “as many minutes as you like. Have a Sullivan and sit down.” And he handed me his silver cigarette-case.

“No,” said I, finding a full voice as I shook my head; “no, I won’t smoke, and I won’t sit down, thank you. Nor will you ask me to do either when you’ve heard what I have to say.”

“Really?” said he, lighting his own cigarette with one clear blue eye upon me. “How do you know?”

“Because you’ll probably show me the door,” I cried bitterly; “and you will be justified in doing it! But it’s no use beating about the bush. You know I dropped over two hundred just now?”

“I hadn’t the money in my pocket.”

“But I had my check-book, and I wrote each of you a check at that desk.”

“Not one of them was worth the paper it was written on, Raffles. I am overdrawn already at my bank!”

“Surely only for the moment?”

“No. I have spent everything.”

“But somebody told me you were so well off. I heard you had come in for money?”

“So I did. Three years ago. It has been my curse; now it’s all gone–every penny! Yes, I’ve been a fool; there never was nor will be such a fool as I’ve been…. Isn’t this enough for you? Why don’t you turn me out?” He was walking up and down with a very long face instead.

“Couldn’t your people do anything?” he asked at length.

“Thank God,” I cried, “I have no people! I was an only child. I came in for everything there was. My one comfort is that they’re gone, and will never know.”

I cast myself into a chair and hid my face. Raffles continued to pace the rich carpet that was of a piece with everything else in his rooms. There was no variation in his soft and even footfalls.

“You used to be a literary little cuss,” he said at length; “didn’t you edit the mag. before you left? Anyway I recollect fagging you to do my verses; and literature of all sorts is the very thing nowadays; any fool can make a living at it.”

I shook my head. “Any fool couldn’t write off my debts,” said I.

“Then you have a flat somewhere?” he went on.

“Well, what about the furniture?”

I laughed aloud in my misery. “There’s been a bill of sale on every stick for months!”

And at that Raffles stood still, with raised eyebrows and stern eyes that I could meet the better now that he knew the worst; then, with a shrug, he resumed his walk, and for some minutes neither of us spoke. But in his handsome, unmoved face I read my fate and death-warrant; and with every breath I cursed my folly and my cowardice in coming to him at all. Because he had been kind to me at school, when he was captain of the eleven, and I his fag, I had dared to look for kindness from him now; because I was ruined, and he rich enough to play cricket all the summer, and do nothing for the rest of the year, I had fatuously counted on his mercy, his sympathy, his help! Yes, I had relied on him in my heart, for all my outward diffidence and humility; and I was rightly served. There was as little of mercy as of sympathy in that curling nostril, that rigid jaw, that cold blue eye which never glanced my way. I caught up my hat. I blundered to my feet. I would have gone without a word; but Raffles stood between me and the door.

“Where are you going?” said he.

“That’s my business,” I replied. “I won’t trouble YOU any more.”

“Not until you tell me where you are going and what you mean to do.”