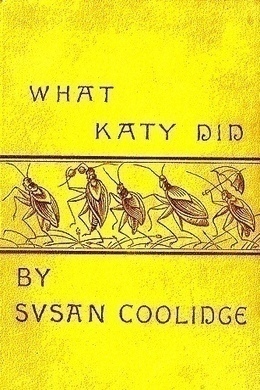 What Katy Did is a children’s book written by Susan Coolidge. It follows the adventures of a twelve-year-old American girl, Katy Carr, and her family who live in the fictional lakeside Ohio town of Burnet in the 1860s. Katy is a tall untidy tomboy, forever getting into scrapes but wishing to be beautiful and beloved. When a terrible accident makes her an invalid, her illness and four-year recovery gradually teach her to be as good and kind as she has always wanted.

I was sitting in the meadows one day, not long ago, at a place where there was a small brook. It was a hot day. The sky was very blue, and white clouds, like great swans, went floating over it to and fro. Just opposite me was a clump of green rushes, with dark velvety spikes, and among them one single tall, red cardinal flower, which was bending over the brook as if to see its own beautiful face in the water. But the cardinal did not seem to be vain.

The picture was so pretty that I sat a long time enjoying it. Suddenly, close to me, two small voices began to talk–or to sing, for I couldn’t tell exactly which it was. One voice was shrill; the other, which was a little deeper, sounded very positive and cross. They were evidently disputing about something, for they said the same words over and over again. These were the words–“Katy did.” “Katy didn’t.” “She did.” “She didn’t.” “She did.” “She didn’t.” “Did.” “Didn’t.” I think they must have repeated them at least a hundred times.

I got up from my seat to see if I could find the speakers; and sure enough, there on one of the cat-tail bulrushes, I spied two tiny pale-green creatures. Their eyes seemed to be weak, for they both wore black goggles. They had six legs apiece,–two short ones, two not so short, and two very long. These last legs had joints like the springs to buggy-tops; and as I watched, they began walking up the rush, and then I saw that they moved exactly like an old-fashioned gig. In fact, if I hadn’t been too big, I think I should have heard them creak as they went along. They didn’t say anything so long as I was there, but the moment my back was turned they began to quarrel again, and in the same old words–“Katy did.” “Katy didn’t.” “She did.” “She didn’t.”

As I walked home I fell to thinking about another Katy,–a Katy I once knew, who planned to do a great many wonderful things, and in the end did none of them, but something quite different,–something she didn’t like at all at first, but which, on the whole, was a great deal better than any of the doings she had dreamed about. And as I thought, this little story grew in my head, and I resolved to write it down for you. I have done it; and, in memory of my two little friends on the bulrush, I give it their name. Here it is–the story of What Katy Did.

Katy’s name was Katy Carr. She lived in the town of Burnet, which wasn’t a very big town, but was growing as fast as it knew how. The house she lived in stood on the edge of the town. It was a large square house, white, with green blinds, and had a porch in front, over which roses and clematis made a thick bower. Four tall locust trees shaded the gravel path which led to the front gate. On one side of the house was an orchard; on the other side were wood piles and barns, and an ice-house. Behind was a kitchen garden sloping to the south; and behind that a pasture with a brook in it, and butternut trees, and four cows–two red ones, a yellow one with sharp horns tipped with tin, and a dear little white one named Daisy.

There were six of the Carr children–four girls and two boys. Katy, the oldest, was twelve years old; little Phil, the youngest, was four, and the rest fitted in between.

Dr. Carr, their Papa, was a dear, kind, busy man, who was away from home all day, and sometimes all night, too, taking care of sick people. The children hadn’t any Mamma. She had died when Phil was a baby, four years before my story began. Katy could remember her pretty well; to the rest she was but a sad, sweet name, spoken on Sunday, and at prayer-times, or when Papa was especially gentle and solemn.

In place of this Mamma, whom they recollected so dimly, there was Aunt Izzie, Papa’s sister, who came to take care of them when Mamma went away on that long journey, from which, for so many months, the little ones kept hoping she might return. Aunt Izzie was a small woman, sharp-faced and thin, rather old-looking, and very neat and particular about everything. She meant to be kind to the children, but they puzzled her much, because they were not a bit like herself when she was a child. Aunt Izzie had been a gentle, tidy little thing, who loved to sit as Curly Locks did, sewing long seams in the parlor, and to have her head patted by older people, and be told that she was a good girl; whereas Katy tore her dress every day, hated sewing, and didn’t care a button about being called “good,” while Clover and Elsie shied off like restless ponies when any one tried to pat their heads. It was very perplexing to Aunt Izzie, and she found it hard to quite forgive the children for being so “unaccountable,” and so little like the good boys and girls in Sunday-school memoirs, who were the young people she liked best, and understood most about.