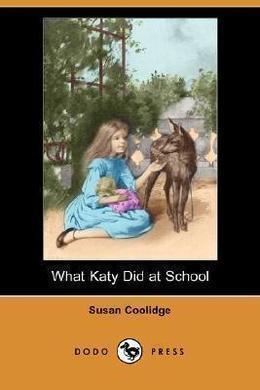 What Katy Did at School

What Katy Did at School is the the sequel to Susan Coolidge’s classic novel of American childhood, and follows directly on from the last novel; just a few days later. A story of the high-spirited and rebellious American girl Katy Carr and her family, as Katy and Clover as they go away to school and make new friends.

It was just after that happy visit of which I told at the end of “What Katy Did,” that Elsie and John made their famous excursion to Conic Section; an excursion which neither of them ever forgot, and about which the family teased them for a long time afterward.

The summer had been cool; but, as often happens after cool summers, the autumn proved unusually hot. It seemed as if the months had been playing a game, and had “changed places” all round; and as if September were determined to show that he knew how to make himself just as disagreeable as August, if only he chose to do so. All the last half of Cousin Helen’s stay, the weather was excessively sultry. She felt it very much, though the children did all they could to make her comfortable, with shaded rooms, and iced water, and fans. Every evening the boys would wheel her sofa out on the porch, in hopes of coolness; but it was of no use: the evenings were as warm as the days, and the yellow dust hanging in the air made the sunshine look thick and hot. A few bright leaves appeared on the trees, but they were wrinkled, and of an ugly color. Clover said she thought they had been boiled red like lobsters. Altogether, the month was a trying one, and the coming of October made little difference: still the dust continued, and the heat; and the wind, when it blew, had no refreshment in it, but seemed to have passed over some great furnace which had burned out of it all life and flavor.

In spite of this, however it was wonderful to see how Katy gained and improved. Every day added to her powers. First she came down to dinner, then to breakfast. She sat on the porch in the afternoons; she poured the tea. It was like a miracle to the others, in the beginning, to watch her going about the house; but they got used to it surprisingly soon,–one does to pleasant things. One person, however, never got used to it, never took it as a matter of course; and that was Katy herself. She could not run downstairs, or out into the garden; she could not open the kitchen door to give an order, without a sense of gladness and exultation which was beyond words. The wider and more active life stimulated her in every way. Her cheeks grew round and pink, her eyes bright. Cousin Helen and papa watched this change with indescribable pleasure; and Mrs. Worrett, who dropped in to lunch one day, fairly screamed with surprise at the sight of it.

“To think of it!” she cried, “why, the last time I was here you looked as if you had took root in that chair of yours for the rest of your days, and here you are stepping around as lively as I be. Well, well! wonders will never cease. It does my eyes good to see you, Katherine. I wish your poor aunt were here to-day; that I do. How pleased she’d be?”

It is doubtful whether Aunt Izzie would have been so pleased, for the lived-in look of the best parlor would have horrified her extremely; but Katy did not recollect that just then. She was touched at the genuine kindness of Mrs. Worrett’s voice, and took very willingly her offered kiss. Clover brought lemonade and grapes, and they all devoted themselves to making the poor lady comfortable. Just before she went away she said,

“How is it that I can’t never get any of you to come out to the Conic Section? I’m sure I’ve asked you often enough. There’s Elsie, now, and John, they’re just the age to enjoy being in the country. Why won’t you send ‘em out for a week? Johnnie can feed chickens, and chase ‘em, too, if she likes,” she added, as Johnnie dashed just then into view, pursuing one of Phil’s bantams round the house. “Tell her so, won’t you, Katherine? There is lots of chickens on the farm. She can chase ‘em from morning to night, if she’s a mind to.”

Katy thanked her, but she didn’t think the children would care to go. She gave Johnnie the message, and then the whole matter passed out of her mind. The family were in low spirits that morning because of Cousin Helen’s having just gone away; and Elsie was lying on the sofa fanning herself with a great palm-leaf fan.

“Oh, dear!” she sighed. “Do you suppose it’s every going to be cool again? It does seem as if I couldn’t bear it any longer.”

“Oh, yes! well enough,” replied Elsie. “It’s only this horrid heat, and never going away to where it’s cooler. I keep thinking about the country, and wishing I were there feeling the wind blow. I wonder if papa wouldn’t let John and me go to Conic Section, and see Mrs. Worrett. Do you think he would, if you asked him?”

“But,” said Katy, amazed, “Conic Section isn’t exactly country, you know. It is just out of the city,–only six miles from here. And Mrs. Worrett’s house is close to the road, papa said. Do you think you’d like it, dear? It can’t be very much cooler than this.”