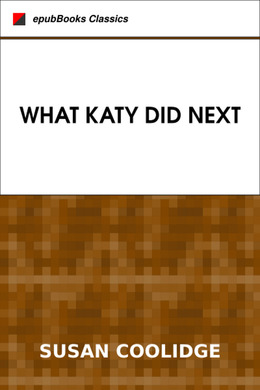 What Katy Did Next

What Katy Did Next is the third installment of Coolidge’s series about a playful young girl called Katy Carr. The story begins with Katy getting an invitation to spend a year in Europe. She is overjoyed at the thought of exploring the interesting places she has read about. However, once she gets there she faces unpleasant surprises but eventually ends up finding the greatest happiness of all.

The September sun was glinting cheerfully into a pretty bedroom furnished with blue. It danced on the glossy hair and bright eyes of two girls, who sat together hemming ruffles for a white muslin dress. The half-finished skirt of the dress lay on the bed; and as each crisp ruffle was completed, the girls added it to the snowy heap, which looked like a drift of transparent clouds or a pile of foamy white-of-egg beaten stiff enough to stand alone.

These girls were Clover and Elsie Carr, and it was Clover’s first evening dress for which they were hemming ruffles. It was nearly two years since a certain visit made by Johnnie to Inches Mills, of which some of you have read in “Nine Little Goslings;” and more than three since Clover and Katy had returned home from the boarding-school at Hillsover.

Clover was now eighteen. She was a very small Clover still, but it would have been hard to find anywhere a prettier little maiden than she had grown to be. Her skin was so exquisitely fair that her arms and wrists and shoulders, which were round and dimpled like a baby’s, seemed cut out of daisies or white rose leaves. Her thick, brown hair waved and coiled gracefully about her head. Her smile was peculiarly sweet; and the eyes, always Clover’s chief beauty, had still that pathetic look which made them irresistible to tender-hearted people.

Elsie, who adored Clover, considered her as beautiful as girls in books, and was proud to be permitted to hem ruffles for the dress in which she was to burst upon the world. Though, as for that, not much “bursting” was possible in Burnet, where tea-parties of a middle-aged description, and now and then a mild little dance, represented “gayety” and “society.” Girls “came out” very much, as the sun comes out in the morning,–by slow degrees and gradual approaches, with no particular one moment which could be fixed upon as having been the crisis of the joyful event.

“There,” said Elsie, adding another ruffle to the pile on the bed,–“there’s the fifth done. It’s going to be ever so pretty, I think. I’m glad you had it all white; it’s a great deal nicer.”

“Cecy wanted me to have a blue bodice and sash,” said Clover, “but I wouldn’t. Then she tried to persuade me to get a long spray of pink roses for the skirt.”

“I’m so glad you didn’t! Cecy was always crazy about pink roses. I only wonder she didn’t wear them when she was married!”

Yes; the excellent Cecy, who at thirteen had announced her intention to devote her whole life to teaching Sunday School, visiting the poor, and setting a good example to her more worldly contemporaries, had actually forgotten these fine resolutions, and before she was twenty had become the wife of Sylvester Slack, a young lawyer in a neighboring town! Cecy’s wedding and wedding-clothes, and Cecy’s house-furnishing had been the great excitement of the preceding year in Burnet; and a fresh excitement had come since in the shape of Cecy’s baby, now about two months old, and named “Katherine Clover,” after her two friends. This made it natural that Cecy and her affairs should still be of interest in the Carr household; and Johnnie, at the time we write of, was making her a week’s visit.

“She was rather wedded to them,” went on Clover, pursuing the subject of the pink roses. “She was almost vexed when I wouldn’t buy the spray. But it cost lots, and I didn’t want it in the least, so I stood firm. Besides, I always said that my first party dress should be plain white. Girls in novels always wear white to their first balls; and fresh flowers are a great deal prettier, any way, than artificial. Katy says she’ll give me some violets to wear.”

“Oh, will she? That will be lovely!” cried the adoring Elsie. “Violets look just like you, somehow. Oh, Clover, what sort of a dress do you think I shall have when I grow up and go to parties and things? Won’t it be awfully interesting when you and I go out to choose it?”

Just then the noise of some one running upstairs quickly made the sisters look up from their work. Footsteps are very significant at times, and these footsteps suggested haste and excitement.

Another moment, the door opened, and Katy dashed in, calling out, “Papa!–Elsie, Clover, where’s papa?”

“He went over the river to see that son of Mr. White’s who broke his leg. Why, what’s the matter?” asked Clover.

“Is somebody hurt?” inquired Elsie, startled at Katy’s agitated looks.

“No, not hurt, but poor Mrs. Ashe is in such trouble.”

Mrs. Ashe, it should be explained, was a widow who had come to Burnet some months previously, and had taken a pleasant house not far from the Carrs’. She was a pretty, lady-like woman, with a particularly graceful, appealing manner, and very fond of her one child, a little girl. Katy and papa both took a fancy to her at once; and the families had grown neighborly and intimate in a short time, as people occasionally do when circumstances are favorable.