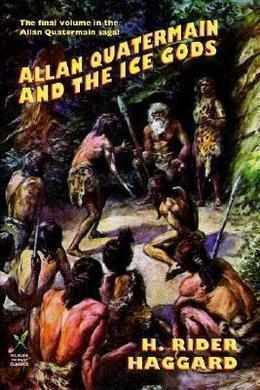 Allan and the Ice Gods

Once more Quatermain takes the hallucinogenic drug and gets to see a previous incarnation of himself–a life he lived thousands of years ago, when he was Wi, a tribal leader during the last great ice age.

Had I the slightest qualification for the task, I, Allan Quatermain, would like to write an essay on Temptation.

This, of course, comes to all, in one shape or another, or at any rate to most, for there are some people so colourless, so invertebrate that they cannot be tempted–or perhaps the subtle powers which surround and direct, or misdirect, us do not think them worth an effort. These cling to any conditions, moral or material, in which they may find themselves, like limpets to a rock; or perhaps float along the stream of circumstance like jellyfish, making no effort to find a path for themselves in either case, and therefore die as they have lived–quite good because nothing has ever moved them to be otherwise–the objects of the approbation of the world, and, let us hope, of Heaven also.

The majority are not so fortunate; something is always egging their living personalities along this or that road of mischief. Materialists will explain to us that this something is but the passions inherited from a thousand generations of unknown progenitors who, departing, left the curse of their blood behind them. I, who am but a simple old fellow, take another view, which, at any rate, is hallowed by many centuries of human opinion. Yes, in this matter, as in sundry others, I put aside all the modern talk and theories and am plumb for the good, old-fashioned, and most efficient Devil as the author of our woes. No one else could suit the lure so exactly to the appetite as that old fisherman in the waters of the human soul, who knows so well how to bait his hooks and change his flies so that they may be attractive not only to all fish but to every mood of each of them.

Well, without going further with the argument, rightly or wrongly, that is my opinion.

Thus, to take a very minor matter–for if the reader thinks that these words are the prelude to telling a tale of murder or other great sins he is mistaken–I believe that it was Satan himself, or, at any rate, one of his agents, who caused my late friend, Lady Ragnall, to bequeath to me the casket of the magical herb called /Taduki/, in connection with which already we had shared certain remarkable adventures.[*]

[*] See the books /The Ivory Child/ and /The Ancient Allan/.

Now, it may be argued that to make use of this /Taduki/ and on its wings to be transported, in fact or in imagination, to some far-away state in which one appears for a while to live and move and have one’s being is no crime, however rash the proceeding. Nor is it, since, if we can find new roads to knowledge, or even to interesting imaginings, why should we not take them? But to break one’s word /is/ a crime, and because of the temptation of this stuff, which, I confess, for me has more allurement than anything else on earth, at any rate, in these latter days, I have broken my word.

For, after a certain experience at Ragnall Castle, did I not swear to myself and before Heaven that no power in the world, not even that of Lady Ragnall herself, would induce me again to inhale those time- dissolving fumes and look upon that which, perhaps designedly, is hidden from the eyes of man; namely, revealments of his buried past, or mayhap of his yet unacted future? What do I say? This business is one of dreams–no more; though I think that those dreams are best left unexplored, because they suggest too much and yet leave the soul unsatisfied. Better the ignorance in which we are doomed to wander than these liftings of corners of the veil; than these revelations which excite delirious hopes that, after all, may be but marsh lights which, when they vanish, will leave us in completer blackness.

Now I will get on to the story of my fall; of how it came about and the revelations to which it led, and which I found interesting enough, whatever others may think of them.

Elsewhere I have told how, years after our joint adventure into Central Africa, once again I came into touch with the widowed Lady Ragnall and allowed myself to be persuaded in her company to inhale the charmed smoke of the /Taduki/ herb, with which she became familiar when, in a state of mental collapse, she fell into the hands of the priests of some strange African faith. Under its influence, the curtain of time seemed to swing aside, and she and I saw ourselves playing great parts as inhabitants of Egypt in the days of the Persian domination. In that life, if the tale were true, we had been very intimate, but before this intimacy culminated in actual union, the curtain fell and we reawoke to our modern world.