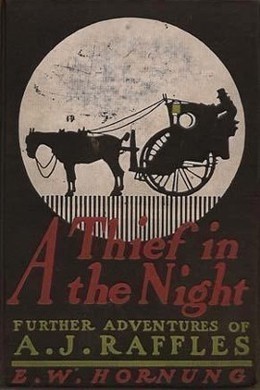 A Thief in the Night

Further adventures of A. J. Raffles, Cricketer and Cracksman

A Thief in the Night is the third collection of stories detailing the exploits and intrigues of gentleman thief A. J. Raffles in late Victorian England. In public a popular sportsman, in private a cunning burglar with a weakness for valuable jewelery, Arthur Raffles, with the help of his side-kick Bunny Manders, always manages to thwart the investigations of Scotland Yard’s Inspector Mackenzie. Popular in its day, this is the last collection of short stories about E. W. Hornung’s most famous character - followed only by a novel, Mr. Justice Raffles.

If I must tell more tales of Raffles, I can but go back to our earliest days together, and fill in the blanks left by discretion in existing annals. In so doing I may indeed fill some small part of an infinitely greater blank, across which you may conceive me to have stretched my canvas for the first frank portrait of my friend. The whole truth cannot harm him now. I shall paint in every wart. Raffles was a villain, when all is written; it is no service to his memory to gloze the fact; yet I have done so myself before to-day. I have omitted whole heinous episodes. I have dwelt unduly on the redeeming side. And this I may do again, blinded even as I write by the gallant glamour that made my villain more to me than any hero. But at least there shall be no more reservations, and as an earnest I shall make no further secret of the greatest wrong that even Raffles ever did me.

I pick my words with care and pain, loyal as I still would be to my friend, and yet remembering as I must those Ides of March when he led me blindfold into temptation and crime. That was an ugly office, if you will. It was a moral bagatelle to the treacherous trick he was to play me a few weeks later. The second offence, on the other hand, was to prove the less serious of the two against society, and might in itself have been published to the world years ago. There have been private reasons for my reticence. The affair was not only too intimately mine, and too discreditable to Raffles. One other was involved in it, one dearer to me than Raffles himself, one whose name shall not even now be sullied by association with ours.

Suffice it that I had been engaged to her before that mad March deed. True, her people called it “an understanding,” and frowned even upon that, as well they might. But their authority was not direct; we bowed to it as an act of politic grace; between us, all was well but my unworthiness. That may be gauged when I confess that this was how the matter stood on the night I gave a worthless check for my losses at baccarat, and afterward turned to Raffles in my need. Even after that I saw her sometimes. But I let her guess that there was more upon my soul than she must ever share, and at last I had written to end it all. I remember that week so well! It was the close of such a May as we had never had since, and I was too miserable even to follow the heavy scoring in the papers. Raffles was the only man who could get a wicket up at Lord’s, and I never once went to see him play. Against Yorkshire, however, he helped himself to a hundred runs as well; and that brought Raffles round to me, on his way home to the Albany.

“We must dine and celebrate the rare event,” said he. “A century takes it out of one at my time of life; and you, Bunny, you look quite as much in need of your end of a worthy bottle. Suppose we make it the Café Royal, and eight sharp? I’ll be there first to fix up the table and the wine.”

And at the Café Royal I incontinently told him of the trouble I was in. It was the first he had ever heard of my affair, and I told him all, though not before our bottle had been succeeded by a pint of the same exemplary brand. Raffles heard me out with grave attention. His sympathy was the more grateful for the tactful brevity with which it was indicated rather than expressed. He only wished that I had told him of this complication in the beginning; as I had not, he agreed with me that the only course was a candid and complete renunciation. It was not as though my divinity had a penny of her own, or I could earn an honest one. I had explained to Raffles that she was an orphan, who spent most of her time with an aristocratic aunt in the country, and the remainder under the repressive roof of a pompous politician in Palace Gardens. The aunt had, I believed, still a sneaking softness for me, but her illustrious brother had set his face against me from the first.

“Hector Carruthers!” murmured Raffles, repeating the detested name with his clear, cold eye on mine. “I suppose you haven’t seen much of him?”

“Not a thing for ages,” I replied. “I was at the house two or three days last year, but they’ve neither asked me since nor been at home to me when I’ve called. The old beast seems a judge of men.”

And I laughed bitterly in my glass.

“Nice house?” said Raffles, glancing at himself in his silver cigarette-case.

“Top shelf,” said I. “You know the houses in Palace Gardens, don’t you?”

“Not so well as I should like to know them, Bunny.”

“Well, it’s about the most palatial of the lot. The old ruffian is as rich as Croesus. It’s a country-place in town.”

“What about the window-fastenings?” asked Raffles casually.