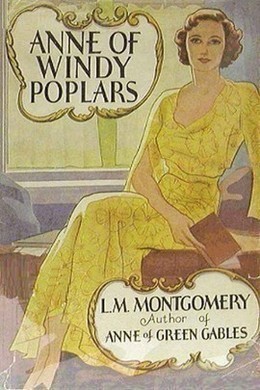 Anne Shirley has left Redmond College behind to begin a new job and a new chapter of her life away from Green Gables. Now she faces a new challenge: the Pringles. They’re known as the royal family of Summerside - and they quickly let Anne know she is not the person they had wanted as principal of Summerside High School. But as she settles into the cozy tower room at Windy Poplars, Anne finds she has great allies in the widows Aunt Kate and Aunt Chatty - and in their irrepressible housekeeper, Rebecca Dew. As Anne learns Summerside’s strangest secrets, winning the support of the prickly Pringles becomes only the first of her triumphs.

“Isn’t that an address! Did you ever hear anything so delicious? Windy Poplars is the name of my new home and I love it. I also love Spook’s Lane, which has no legal existence. It should be Trent Street but it is never called Trent Street except on the rare occasions when it is mentioned in the Weekly Courier … and then people look at each other and say, ‘Where on earth is that?’ Spook’s Lane it is … although for what reason I cannot tell you. I have already asked Rebecca Dew about it, but all she can say is that it has always been Spook’s Lane and there was some old yarn years ago of its being haunted. But SHE has never seen anything worse-looking than herself in it.

“However, I mustn’t get ahead of my story. You don’t know Rebecca Dew yet. But you will, oh, yes, you will. I foresee that Rebecca Dew will figure largely in my future correspondence.

“It’s dusk, dearest. (In passing, isn’t ‘dusk’ a lovely word? I like it better than twilight. It sounds so velvety and shadowy and … and … DUSKY.) In daylight I belong to the world … in the night to sleep and eternity. But in the dusk I’m free from both and belong only to myself … and YOU. So I’m going to keep this hour sacred to writing to you. Though THIS won’t be a love- letter. I have a scratchy pen and I can’t write love-letters with a scratchy pen … or a sharp pen … or a stub pen. So you’ll only get THAT kind of letter from me when I have exactly the right kind of pen. Meanwhile, I’ll tell you about my new domicile and its inhabitants. Gilbert, they’re such DEARS.

“I came up yesterday to look for a boarding-house. Mrs. Rachel Lynde came with me, ostensibly to do some shopping but really, I know, to choose a boarding-house for me. In spite of my Arts course and my B.A., Mrs. Lynde still thinks I am an inexperienced young thing who must be guided and directed and overseen.

“We came by train and oh, Gilbert, I had the funniest adventure. You know I’ve always been one to whom adventures came unsought. I just seem to attract them, as it were.

“It happened just as the train was coming to a stop at the station. I got up and, stooping to pick up Mrs. Lynde’s suitcase (she was planning to spend Sunday with a friend in Summerside), I leaned my knuckles heavily on what I thought was the shiny arm of a seat. In a second I received a violent crack across them that nearly made me howl. Gilbert, what I had taken for the arm of a seat was a man’s bald head. He was glaring fiercely at me and had evidently just waked up. I apologized abjectly and got off the train as quickly as possible. The last I saw of him he was still glaring. Mrs. Lynde was horrified and my knuckles are sore yet!

“I did not expect to have much trouble in finding a boarding-house, for a certain Mrs. Tom Pringle has been boarding the various principals of the High School for the last fifteen years. But, for some unknown reason, she has grown suddenly tired of ‘being bothered’ and wouldn’t take me. Several other desirable places had some polite excuse. Several other places WEREN’T desirable. We wandered about the town the whole afternoon and got hot and tired and blue and headachy … at least I did. I was ready to give up in despair … and then, Spook’s Lane just happened!

“We had dropped in to see Mrs. Braddock, an old crony of Mrs. Lynde’s. And Mrs. Braddock said she thought ‘the widows’ might take me in.

“‘I’ve heard they want a boarder to pay Rebecca Dew’s wages. They can’t afford to keep Rebecca any longer unless a little extra money comes in. And if Rebecca goes, WHO is to milk that old red cow?’

“Mrs. Braddock fixed me with a stern eye as if she thought I ought to milk the red cow but wouldn’t believe me on oath if I claimed I could.

“‘What widows are you talking about?’ demanded Mrs. Lynde.

“‘Why, Aunt Kate and Aunt Chatty,’ said Mrs. Braddock, as if everybody, even an ignorant B.A., ought to know that. ‘Aunt Kate is Mrs. Amasa MacComber (she’s the Captain’s widow) and Aunt Chatty is Mrs. Lincoln MacLean, just a plain widow. But every one calls them “aunt.” They live at the end of Spook’s Lane.’

“Spook’s Lane! That settled it. I knew I just had to board with the widows.

“‘Let’s go and see them at once,’ I implored Mrs. Lynde. It seemed to me if we lost a moment Spook’s Lane would vanish back into fairyland.

“‘You can see them, but it’ll be Rebecca who’ll really decide whether they’ll take you or not. Rebecca Dew rules the roost at Windy Poplars, I can tell you.”

“Windy Poplars! It couldn’t be true … no it couldn’t. I must be dreaming. And Mrs. Rachel Lynde was actually saying it was a funny name for a place.