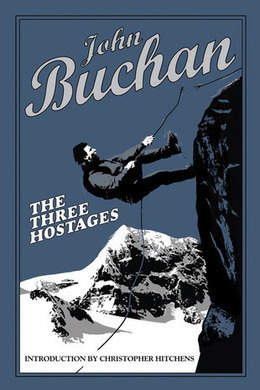 England is at peace after the end of World War I. Spy-catcher, Richard Hannay, is enjoying the country life at Fosse Manor. However, Hannay’s peace is shattered when a dangerous criminal gang kidnap three children of important national figures. The deadline for searching for the hostages is midsummer. Hannay joins forces with Sandy Arbuthnot to face this most difficult enemy whose speciality is hypnotism.

That evening, I remember, as I came up through the Mill Meadow, I was feeling peculiarly happy and contented. It was still mid- March, one of those spring days when noon is like May, and only the cold pearly haze at sunset warns a man that he is not done with winter. The season was absurdly early, for the blackthorn was in flower and the hedge roots were full of primroses. The partridges were paired, the rooks were well on with their nests, and the meadows were full of shimmering grey flocks of fieldfares on their way north. I put up half a dozen snipe on the boggy edge of the stream, and in the bracken in Sturn Wood I thought I saw a woodcock, and hoped that the birds might nest with us this year, as they used to do long ago. It was jolly to see the world coming to life again, and to remember that this patch of England was my own, and all these wild things, so to speak, members of my little household.

As I say, I was in a very contented mood, for I had found something I had longed for all my days. I had bought Fosse Manor just after the War as a wedding present for Mary, and for two and a half years we had been settled there. My son, Peter John, was rising fifteen months, a thoughtful infant, as healthy as a young colt and as comic as a terrier puppy. Even Mary’s anxious eye could scarcely detect in him any symptoms of decline. But the place wanted a lot of looking to, for it had run wild during the War, and the woods had to be thinned, gates and fences repaired, new drains laid, a ram put in to supplement the wells, a heap of thatching to be done, and the garden borders to be brought back to cultivation. I had got through the worst of it, and as I came out of the Home Wood on to the lower lawns and saw the old stone gables that the monks had built, I felt that I was anchored at last in the pleasantest kind of harbour.

There was a pile of letters on the table in the hall, but I let them be, for I was not in the mood for any communication with the outer world. As I was having a hot bath Mary kept giving me the news through her bedroom door. Peter John had been raising Cain over a first tooth; the new shorthorn cow was drying off; old George Whaddon had got his granddaughter back from service; there was a new brood of runner-ducks; there was a missel-thrush building in the box hedge by the lake. A chronicle of small beer, you will say, but I was by a long chalk more interested in it than in what might be happening in Parliament or Russia or the Hindu Kush. The fact is I was becoming such a mossback that I had almost stopped reading the papers. Many a day The Times would remain unopened, for Mary never looked at anything but the first page to see who was dead or married. Not that I didn’t read a lot, for I used to spend my evenings digging into county history, and learning all I could about the old fellows who had been my predecessors. I liked to think that I lived in a place that had been continuously inhabited for a thousand years. Cavalier and Roundhead had fought over the countryside, and I was becoming a considerable authority on their tiny battles. That was about the only interest I had left in soldiering.

As we went downstairs, I remember we stopped to look out of the long staircase window which showed a segment of lawn, a corner of the lake, and through a gap in the woods a vista of green downland. Mary squeezed my arm. “What a blessed country,” she said. “Dick, did you ever dream of such peace? We’re lucky, lucky people.”

Then suddenly her face changed in that way she has and grew very grave. I felt a little shiver run along her arm.

“It’s too good and beloved to last,” she whispered. “Sometimes I am afraid.”

“Nonsense,” I laughed. “What’s going to upset it? I don’t believe in being afraid of happiness.” I knew very well, of course, that Mary couldn’t be afraid of anything.

She laughed too. “All the same I’ve got what the Greek called aidos. You don’t know what that means, you old savage. It means that you feel you must walk humbly and delicately to propitiate the Fates. I wish I knew how.”

She walked too delicately, for she missed the last step and our descent ended in an undignified shuffle right into the arms of Dr. Greenslade.