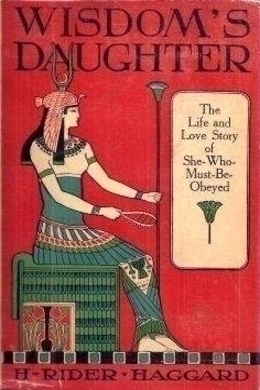 In the fourth and final book in the She sequence, the beautiful and immortal Ayesha tells her tale of power, wisdom, love, and deception, in her own words. Arabian by birth, Ayesha’s natural beauty was the cause in her father’s kingdom of many wars and conflicts between jealous princes and suitors, leading to a rumor that she was cursed. Swearing an oath of celibacy, to serve Isis the Goddess of the Spirit of Nature and turn away from Aphrodite the Goddess of Love, she seeks to protect herself, until Greek soldier of fortune Kallikrates comes to her for sanctuary and her resolve weakens. But Kallikrates does not arrive alone—he is pursued by the Pharaoh’s daughter who is wildly jealous of Ayesha’s beauty and vows to destroy her. Only by staying true to Isis does Ayesha survive, and as a reward Isis leads her to the hidden kingdom of Kôr in Africa, to herald in a new Golden Age. The kingdom of Kôr hides many secrets, including The Flame of Eternal Life where ultimately Ayesha’s vanity, obsession, and desire lead to her downfall.

To the learned man, ugly of form and face but sound at heart, Holly by name, a citizen of a northern land whom at times I think that once I knew as Noot the Holy, that philosopher who was my master in a past which seems far to him and is forgot, but to me is but as yesterday, to this Holly, I say, I, who on earth am named Ayesha, daughter of Yarab the Arab chief, but who have many other titles here and elsewhere, have told certain stories of my past days and the part I played in them. Also I have told the same or other stories to my lord Kallikrates, the Greek, now named Leo Vincey, aforetimes a warrior after the habit of his race and his forefathers, who for religious reasons became a priest of Isis, the great goddess of Egypt and, once I believed, my mother in the spirit. Also I have told these or different tales to one Allan, a wandering hunter of beasts and a fighting man of good blood who visited me at Kor, though of this I said nothing to Holly or to my lord Kallikrates, now known as Leo or the Lion, because as to this Allan I held it wiser to be silent.

All these stories do not agree together, since often I spoke them as parables, or in order to tell to each that which he would wish to hear, or to hide my mind for my own purposes.

Yet in every one of them lay hid something of the truth, a grain of gold in the ore of fable that might be found by him who had the skill and strength to seek.

Now my spirit moves me to interpret these parables and set down what I am and whence I came and certain of the things that I have seen and done, or at the least such of them as I am permitted to reveal by those mightier than I of whom I am the servant, as they in their turn are the servants of others yet mightier than themselves.

Here in these Asian caves I sit, the Hesea of the Mountain, the last priestess of the worship of Mother Isis upon earth, as aforetime I sat amid the ruins of Kor in Libya.

At Kor for two thousand years I watched and waited till at length reborn Kallikrates, whom unwittingly I slew in a rage of jealousy, came back to me where I had slain him. There, because of the curse that is on me and him, I lost him again, for in this very place, too, I was slain most horribly, slain by an excess of life wherewith I thought to make myself more beautiful even than I was and in striving to overfill the vase, shattered it to the vilest dust. Thus once more Fate made a mock of me; once more I lost Kallikrates whom it is my doom to desire in the flesh and to raise up in the spirit through time untold.

My soul passed out and on and here for a little while it found a home masked in the withered shape of an ancient priestess of my worship.

As was foredoomed my lord came back to me and saw the shining soul within that hideous shape and claimed it with a kiss, as I think the bravest deed and the most faithful that was ever done by man. In the magic of that kiss as also was foredoomed, my beauty great again before his eyes, so that once more I stand a glory upon earth. Now we are plighted, now, if all goes well, within a year we shall be wed, aye, within one short year after I have borne him back to Kor and unsealed the hidden Fire of Life and plunged him in its essence, giving to him my own gift of undying days.

And yet and yet–who knows the end? He presses me sore, and the starved woman part of me is passionate and weak and I may yield, and if his lips touch mine, who can say but that the fire within me will destroy him, the unfortified, and bring all my plans to dust and nothingness? I am great, set far above mortals, yet I play against forces I cannot see, that are greater than I, and it may please them to snatch the cup from my lips, and once more to overthrow me; for even though the blood of gods runs in him, as it runs in all of us, who can stand against their master, Doom, and its decrees? Therefore I, named Wisdom’s Daughter, named Child of Isis, to-night am as full of fears as any mortal maid craving her lover beneath the moon and not knowing but that war, or chance, or the vile breath of sickness may have borne him away into that gulf where all things must be lost– until they are found again.

But yesterday he said to me that I who seemed to know the past and to whom doors were opened that cannot be entered by human feet, should write down what I know and have experienced, that in time to come the world may be the wiser.