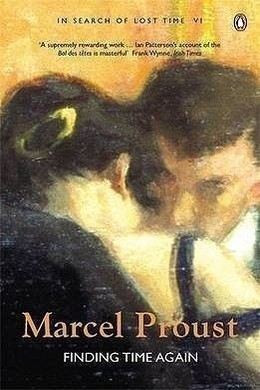 The final volume of In Search of Lost Time chronicles the years of World War I, when, as M. de Charlus reflects on a moonlit walk, Paris threatens to become another Pompeii. Years later, after the war’s end, Proust’s narrator returns to Paris, where Mme. Verdurin has become the Princesse de Guermantes. He reflects on time, reality, jealousy, artistic creation, and the raw material for literature–his past life.

Tansonville seemed little more than a place to rest in between two walks or a refuge during a shower. Rather too countrified, it was one of those rural dwellings where every sitting-room is a cabinet of greenery, and where the roses and the birds out in the garden keep you company in the curtains; for they were old and each rose stood out so clearly that it might have been picked like a real one and each bird put in a cage, unlike those pretentious modern decorations in which, against a silver background, all the apple trees in Normandy are outlined in the Japanese manner, to trick the hours you lie in bed. I spent the whole day in my room, the windows of which opened upon the beautiful verdure of the park, upon the lilacs of the entrance, upon the green leaves of the great trees beside the water and in the forest of Méséglise. It was a pleasure to contemplate all this, I was saying to myself: “How charming to have all this greenery in my window” until suddenly in the midst of the great green picture I recognised the clock tower of the Church of Combray toned in contrast to a sombre blue as though it were far distant, not a reproduction of the clock tower but its very self which, defying time and space, thrust itself into the midst of the luminous greenery as if it were engraved upon my window-pane. And if I left my room, at the end of the passage, set towards me like a band of scarlet, I perceived the hangings of a little sitting-room which though only made of muslin, were of a scarlet so vivid that they would catch fire if a single sun-ray touched them.

During our walks Gilberte alluded to Robert as though he were turning away from her but to other women. It was true that his life was encumbered with women as masculine attachments encumber that of women-loving men, both having that character of forbidden fruit, of a place vainly usurped, which unwanted objects have in most houses.

Once I left Gilberte early and in the middle of the night, while still half-asleep, I called Albertine. I had not been thinking or dreaming of her, nor had I mistaken her for Gilberte. My memory had lost its love for Albertine but it seems there must be an involuntary memory of the limbs, pale and sterile imitation of the other, which lives longer as certain mindless animals or plants live longer than man. The legs, the arms are full of blunted memories; a reminiscence germinating in my arm had made me seek the bell behind my back, as I used to in my room in Paris and I had called Albertine, imagining my dead friend lying beside me as she so often did at evening when we fell asleep together, counting the time it would take Françoise to reach us, so that Albertine might without imprudence pull the bell I could not find.

Robert came to Tansonville several times while I was there. He was very different from the man I had known before. His life had not coarsened him as it had M. de Charlus, but, on the contrary, had given him more than ever the easy carriage of a cavalry officer although at his marriage he had resigned his commission. As gradually M. de Charlus had got heavier, Robert (of course he was much younger, yet one felt he was bound to approximate to that type with age like certain women who resolutely sacrifice their faces to their figures and never abandon Marienbad, believing, as they cannot hope to keep all their youthful charms, that of the outline to represent best the others) had become slimmer, swifter, the contrary effect of the same vice. This velocity had other psychological causes; the fear of being seen, the desire not to seem to have that fear, the feverishness born of dissatisfaction with oneself and of boredom. He had the habit of going into certain haunts of ill-fame, where as he did not wish to be seen entering or coming out, he effaced himself so as to expose the least possible surface to the malevolent gaze of hypothetical passers-by, and that gust-like motion had remained and perhaps signified the apparent intrepidity of one who wants to show he is unafraid and does not take time to think.

To complete the picture one must reckon with the desire, the older he got, to appear young, and also the impatience of those who are always bored and blasés, yet being too intelligent for a relatively idle life, do not sufficiently use their faculties. Doubtless the very idleness of such people may display itself by indifference but especially since idleness, owing to the favour now accorded to physical exercise, has taken the form of sport, even when the latter cannot be practised, feverish activity leaves boredom neither time nor space to develop in.