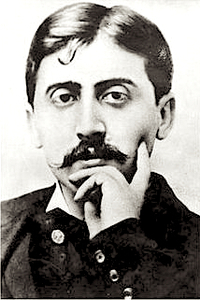 Valentin Louis Georges Eugène Marcel Proust was a French novelist, critic, and essayist best known for his monumental novel À la recherche du temps perdu (In Search of Lost Time; earlier translated as Remembrance of Things Past). Proust was involved in writing and publishing from an early age. In addition to the literary magazines with which he was associated, and in which he published, while at school, La Revue verte and La Revue lilas, from 1890 to 1891 Proust published a regular society column in the journal Le Mensuel. In 1892 he was involved in founding a literary review called Le Banquet (also the French title of Plato’s Symposium), and throughout the next several years Proust published small pieces regularly in this journal and in the prestigious La Revue Blanche. (source: Wikipedia)

When publiched, Within a Budding Grove was awarded the Prix Goncourt, bringing the author immediate fame. In this second volume of In Search of Lost Tim...read more »

The narrator not only depicts the class tensions of a changing France at the beginning of the twentieth century but also exposes the decadence of aristo...read more »

Marcel Proust’s In Search of Lost Time is one of the most entertaining reading experiences in any language and arguably the finest novel of the twentiet...read more »

In The Captive, Proust’s narrator describes living in his mother’s Paris apartment with his lover, Albertine, and subsequently falling out of love with ...read more »

After the relative intimacy of the first two volumes of In Search of Lost Time, Le Côté de Guermantes opens up a vast, dazzling landscape of fashionable...read more »

Albertine has finally escaped her ‘imprisonment’ from Marcel’s Paris apartment… Not only is Marcel quite unprepared for the effect her flight has on him...read more »

The final volume of In Search of Lost Time chronicles the years of World War I, when, as M. de Charlus reflects on a moonlit walk, Paris threatens to be...read more »