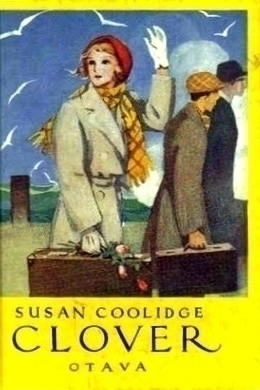 Katy and Clover Carr sitting with their sewing on the door steps drew in with every breath the sense of spring.

It was one of those afternoons in late April which are as mild and balmy as any June day. The air was full of the chirps and twitters of nest-building birds, and of sweet indefinable odors from half-developed leaf-buds and cherry and pear blossoms. The wisterias overhead were thickly starred with pointed pearl-colored sacs, growing purpler with each hour, which would be flowers before long; the hedges were quickening into life, the long pensile willow-boughs and the honey-locusts hung in a mist of fine green against the sky, and delicious smells came with every puff of wind from the bed of white violets under the parlor windows.

Katy and Clover Carr, sitting with their sewing on the door-steps, drew in with every breath the sense of spring. Who does not know the delightfulness of that first sitting out of doors after a long winter’s confinement? It seems like flinging the gauntlet down to the powers of cold. Hope and renovation are in the air. Life has conquered Death, and to the happy hearts in love with life there is joy in the victory. The two sisters talked busily as they sewed, but all the time an only half-conscious rapture informed their senses,–the sympathy of that which is immortal in human souls with the resurrection of natural things, which is the sure pledge of immortality.

It was nearly a year since Katy had come back from that too brief journey to Europe with Mrs. Ashe and Amy, about which some of you have read, and many things of interest to the Carr family had happened during the interval. The “Natchitoches” had duly arrived in New York in October, and presently afterward Burnet was convulsed by the appearance of a tall young fellow in naval uniform, and the announcement of Katy’s engagement to Lieutenant Worthington.

It was a piece of news which interested everybody in the little town, for Dr. Carr was a universal friend and favorite. For a time he had been the only physician in the place; and though with the gradual growth of population two or three younger men had appeared to dispute the ground with him, they were forced for the most part to content themselves with doctoring the new arrivals, and with such fragments and leavings of practice as Dr. Carr chose to intrust to them. None of the old established families would consent to call in any one else if they could possibly get the “old” doctor.

A skilful practitioner, who is at the same time a wise adviser, a helpful friend, and an agreeable man, must necessarily command a wide influence. Dr. Carr was “by all odds and far away,” as our English cousins would express it, the most popular person in Burnet, wanted for all pleasant occasions, and doubly wanted for all painful ones.

So the news of Katy’s engagement was made a matter of personal concern by a great many people, and caused a general stir, partly because she was her father’s daughter, and partly because she was herself; for Katy had won many friends by her own merit. So long as Ned Worthington stayed, a sort of tide of congratulation and sympathy seemed to sweep through the house all day long. Tea-roses and chrysanthemums, and baskets of pears and the beautiful Burnet grapes flooded the premises, and the door-bell rang so often that Clover threatened to leave the door open, with a card attached,–“Walk straight in. He is in the parlor!”

Everybody wanted to see and know Katy’s lover, and to have him as a guest. Ten tea-drinkings a week would scarcely have contented Katy’s well-wishers, had the limitations of mortal weeks permitted such a thing; and not a can of oysters would have been left in the place if Lieutenant Worthington’s leave had lasted three days longer. Clover and Elsie loudly complained that they themselves never had a chance to see him; for whenever he was not driving or walking with Katy, or having long tête-à-têtes in the library, he was eating muffins somewhere, or making calls on old ladies whose feelings would be dreadfully hurt if he went away without their seeing him.

“Sisters seem to come off worst of all,” protested Johnnie. But in spite of their lamentations they all saw enough of their future brother-in-law to grow fond of him; and notwithstanding some natural pangs of jealousy at having to share Katy with an outsider, it was a happy visit, and every one was sorry when the leave of absence ended, and Ned had to go away.