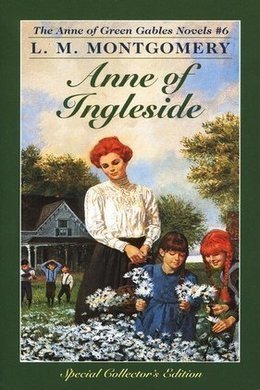 Anne is the mother of five, with never a dull moment in her lively home. And now with a new baby on the way and insufferable Aunt Mary visiting - and wearing out her welcome - Anne’s life is full to bursting. Still, Mrs Doctor can’t think of any place she’d rather be than her own beloved Ingleside. Until the day she begins to worry that her adored Gilbert doesn’t love her anymore. How could that be? She may be a little older, but she’s still the same irrepressible, irreplaceable redhead - the wonderful Anne of Green Gables, all grown up… She’s ready to make her cherished husband fall in love with her all over again!

“How white the moonlight is tonight!” said Anne Blythe to herself, as she went up the walk of the Wright garden to Diana Wright’s front door, where little cherry-blossom petals were coming down on the salty, breeze-stirred air.

She paused for a moment to look about her on hills and woods she had loved in olden days and still loved. Dear Avonlea! Glen St. Mary was home to her now and had been home for many years but Avonlea had something that Glen St. Mary could never have. Ghosts of herself met her at every turn … the fields she had roamed in welcomed her … unfading echoes of the old sweet life were all about her … every spot she looked upon had some lovely memory. There were haunted gardens here and there where bloomed all the roses of yesteryear. Anne always loved to come home to Avonlea even when, as now, the reason for her visit had been a sad one. She and Gilbert had come up for the funeral of his father and Anne had stayed for a week. Marilla and Mrs. Lynde could not bear to have her go away too soon.

Her old porch gable room was always kept for her and when Anne had gone to it the night of her arrival she found that Mrs. Lynde had put a big, homey bouquet of spring flowers in it for her … a bouquet that, when Anne buried her face in it, seemed to hold all the fragrance of unforgotten years. The Anne-who-used-to-be was waiting there for her. Deep, dear old gladnesses stirred in her heart. The gable room was putting its arms around her … enclosing her … enveloping her. She looked lovingly at her old bed with the apple-leaf spread Mrs. Lynde had knitted and the spotless pillows trimmed with deep lace Mrs. Lynde had crocheted …at Marilla’s braided rugs on the floor … at the mirror that had reflected the face of the little orphan, with her unwritten child’s forehead, who had cried herself to sleep there that first night so long ago. Anne forgot that she was the joyful mother of five children … with Susan Baker again knitting mysterious bootees at Ingleside. She was Anne of Green Gables once more.

Mrs. Lynde found her still staring dreamily in the mirror when she came in, bringing clean towels.

“It’s real good to have you home again, Anne, that’s what. It’s nine years since you went away, but Marilla and I can’t seem to get over missing you. It’s not so lonesome now since Davy got married …Millie is a real nice little thing … such pies! … though she’s curious as a chipmunk about everything. But I’ve always said and always will say that there’s nobody like you.”

“Ah, but this mirror can’t be tricked, Mrs. Lynde. It’s telling me plainly, ‘You’re not as young as you once were,’” said Anne whimsically.

“You’ve kept your complexion very well,” said Mrs. Lynde consolingly. “Of course you never had much colour to lose.”

“At any rate, I’ve never a hint of a second chin yet,” said Anne gaily. “And my old room remembers me, Mrs. Lynde. I’m glad … it would hurt me so if I ever came back and found it had forgotten me. And it’s wonderful to see the moon rising over the Haunted Wood again.”

“It looks like a great big piece of gold in the sky, doesn’t it?” said Mrs. Lynde, feeling that she was taking a wild, poetical flight and thankful that Marilla wasn’t there to hear.

“Look at those pointed firs coming out against it … and the birches in the hollow still holding their arms up to the silver sky. They’re big trees now … they were just baby things when I came here … that DOES make me feel a bit old.”

“Trees are like children,” said Mrs. Lynde. “It’s dreadful the way they grow up the minute you turn your back on them. Look at Fred Wright … he’s only thirteen but he’s nearly as tall as his father. There’s a hot chicken pie for supper and I made some of my lemon biscuits for you. You needn’t be a mite afraid to sleep in that bed. I aired the sheets today … and Marilla didn’t know I did it and gave them another airing … and Millie didn’t know either of us did and gave them a third. I hope Mary Maria Blythe will get out tomorrow … she always enjoys a funeral so.”

“Aunt Mary Maria … Gilbert always calls her that although she is only his father’s cousin … always calls me ‘Annie,’” shuddered Anne. “And the first time she saw me after I was married she said, ‘It’s so strange Gilbert picked you. He could have had so many nice girls.’ Perhaps that’s why I’ve never liked her … and I know Gilbert doesn’t either, though he’s too clannish to admit it.”

“Will Gilbert be staying up long?”

“No. He has to go back tomorrow night. He left a patient in a very critical condition.”