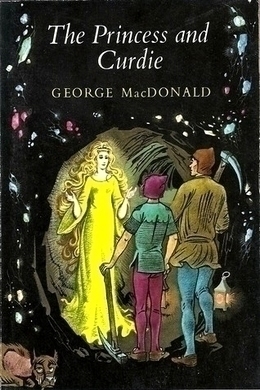 The Princess and Curdie

The Princess and Curdie are back in this sequel to The Princess and the Goblin. Princess Irene and Curdie are a year or two older, and must overthrow a set of corrupt ministers who are poisoning Irene’s father, the king. Irene’s grandmother is also back and she gives Curdie a strange gift and a monster called Lina to help him on his quest. A wonderful tale of adventure and courage.

A mountain is a strange and awful thing. In old times, without knowing so much of their strangeness and awfulness as we do, people were yet more afraid of mountains. But then somehow they had not come to see how beautiful they are as well as awful, and they hated them,–and what people hate they must fear. Now that we have learned to look at them with admiration, perhaps we do not always feel quite awe enough of them. To me they are beautiful terrors.

I will try to tell you what they are. They are portions of the heart of the earth that have escaped from the dungeon down below, and rushed up and out. For the heart of the earth is a great wallowing mass, not of blood, as in the hearts of men and animals, but of glowing hot melted metals and stones. And as our hearts keep us alive, so that great lump of heat keeps the earth alive: it is a huge power of buried sunlight–that is what it is. Now think: out of that caldron, where all the bubbles would be as big as the Alps if it could get room for its boiling, certain bubbles have bubbled out and escaped–up and away, and there they stand in the cool, cold sky–mountains. Think of the change, and you will no more wonder that there should be something awful about the very look of a mountain: from the darkness–for where the light has nothing to shine upon, it is much the same as darkness–from the heat, from the endless tumult of boiling unrest–up, with a sudden heavenward shoot, into the wind, and the cold, and the starshine, and a cloak of snow that lies like ermine above the blue-green mail of the glaciers; and the great sun, their grandfather, up there in the sky; and their little old cold aunt, the moon, that comes wandering about the house at night; and everlasting stillness, except for the wind that turns the rocks and caverns into a roaring organ for the young archangels that are studying how to let out the pent-up praises of their hearts, and the molten music of the streams, rushing ever from the bosoms of the glaciers fresh-born. Think too of the change in their own substance–no longer molten and soft, heaving and glowing, but hard and shining and cold. Think of the creatures scampering over and burrowing in it, and the birds building their nests upon it, and the trees growing out of its sides, like hair to clothe it, and the lovely grass in the valleys, and the gracious flowers even at the very edge of its armour of ice, like the rich embroidery of the garment below, and the rivers galloping down the valleys in a tumult of white and green! And along with all these, think of the terrible precipices down which the traveller may fall and be lost, and the frightful gulfs of blue air cracked in the glaciers, and the dark profound lakes, covered like little arctic oceans with floating lumps of ice. All this outside the mountain! But the inside, who shall tell what lies there? Caverns of awfullest solitude, their walls miles thick, sparkling with ores of gold or silver, copper or iron, tin or mercury, studded perhaps with precious stones–perhaps a brook, with eyeless fish in it, running, running ceaseless, cold and babbling, through banks crusted with carbuncles and golden topazes, or over a gravel of which some of the stones are rubies and emeralds, perhaps diamonds and sapphires–who can tell?–and whoever can’t tell is free to think–all waiting to flash, waiting for millions of ages–ever since the earth flew off from the sun, a great blot of fire, and began to cool. Then there are caverns full of water, numbing cold, fiercely hot–hotter than any boiling water. From some of these the water cannot get out, and from others it runs in channels as the blood in the body: little veins bring it down from the ice above into the great caverns of the mountain’s heart, whence the arteries let it out again, gushing in pipes and clefts and ducts of all shapes and kinds, through and through its bulk, until it springs newborn to the light, and rushes down the mountain side in torrents, and down the valleys in rivers–down, down, rejoicing, to the mighty lungs of the world, that is the sea, where it is tossed in storms and cyclones, heaved up in billows, twisted in waterspouts, dashed to mist upon rocks, beaten by millions of tails, and breathed by millions of gills, whence at last, melted into vapour by the sun, it is lifted up pure into the air, and borne by the servant winds back to the mountain tops and the snow, the solid ice, and the molten stream.