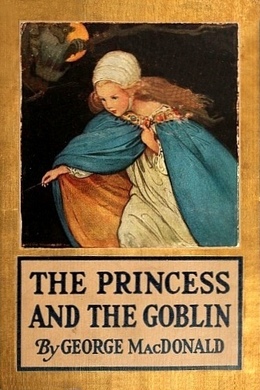 The Princess and the Goblin

The Princess and the Goblin is the story of the young Princess Irene, her good friend Curdie–a minor’s son–and Irene’s mysterious and beautiful great great grandmother, who lives in a secret room at the top of the castle stairs. Filled with images of dungeons and goblins, mysterious fires, burning roses, and a thread so fine as to be invisible and yet–like prayer–strong enough to lead the Princess back home to her grandmother’s arms, this is a story of Curdie’s slow realization that sometimes, as the princess tells him, “you must believe without seeing.” J.R.R. Tolkien was a great admirer of George MacDonald’s fairy-stories. When his children were young, he used to read The Princess and the Goblin to them in the evenings, before they went to bed.

The sequel The Princess and Curdie is also available.

There was once a little princess who–

“But, Mr. Author, why do you always write about princesses?”

“Because every little girl is a princess.”

“You will make them vain if you tell them that.”

“Not if they understand what I mean.”

“Then what do you mean?”

“What do you mean by a princess?”

“The daughter of a king.”

“Very well, then every little girl is a princess, and there would be no need to say anything about it, except that she is always in danger of forgetting her rank, and behaving as if she had grown out of the mud. I have seen little princesses behave like the children of thieves and lying beggars, and that is why they need, to be told they are princesses. And that is why, when I tell a story of this kind, I like to tell it about a princess. Then I can say better what I mean, because I can then give her every beautiful thing I want her to have.”

There was once a little princess whose father was king over a great country full of mountains and valleys. His palace was built upon one of the mountains, and was very grand and beautiful. The princess, whose name was Irene, was born there, but she was sent soon after her birth, because her mother was not very strong, to be brought up by country people in a large house, half castle, half farm-house, on the side of another mountain, about halfway between its base and its peak.

The princess was a sweet little creature, and at the time my story begins was about eight years old. I think, but she got older very fast. Her face was fair and pretty, with eyes like two bits of night-sky, each with a star dissolved in the blue. Those eyes you would have thought must have known they came from there, so often were they turned up in that direction. The ceiling of her nursery was blue, with stars in it, as like the sky as they could make it. But I doubt if ever she saw the real sky with the stars in it, for a reason which I had better mention at once.

These mountains were full of hollow places underneath; huge caverns, and winding ways, some with water running through them, and some shining with all colors of the rainbow when a light was taken in. There would not have been much known about them, had there not been mines there, great deep pits, with long galleries and passages running off from them, which had been dug to get at the ore of which the mountains were full. In the course of digging, the miners came upon many of these natural caverns. A few of them had far-off openings out on the side of a mountain, or into a ravine.