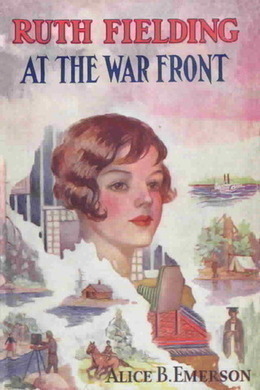 Ruth Fielding at the War Front

The Hunt for the Lost Soldier

Ruth continues her work for the Red Cross and is soon transferred to a hospital that is on the war front. Ruth faces the very real danger of possible death but soon has a greater concern. Ruth asks a friend whether there is any news of Tom Cameron and learns that he has disappeared in Germany—and is suspected of working for the Germans! Ruth is shaken but certain that Tom would never betray his country. Ruth becomes acquainted with the Countess Marchand and her son, Major Marchand. Ruth trusts the Countess completely, but is suspicious that her son might be working for the Germans. One day, Ruth is walking along a road when a strange note is dropped from a plane. The note states, “Don’t believe everything you hear.” It is written in Tom Cameron’s handwriting. Ruth realizes that Tom must be in on some secret mission in German territory. “Halt!” was the sudden command. Ruth soon has an unexpected ally who has information about Tom. The two concoct a daring plan which requires Ruth to travel into enemy territory in disguise so that Tom can be rescued. Ruth willingly agrees to the plan, but will she make it out alive?

It was a midwinter day, yet the air was balmy. The trees were bare-limbed but with a haze clothing them in the distance that seemed almost that of returning verdure. The grass, even in mid-winter, showed green. A bird sang lustily in the hedge.

Up the grassy lane walked a girl in the costume of the active Red Cross worker–an intelligent looking girl with a face that, although perhaps not perfect in form, was possessed of an expression that was alluring.

Neither observant man nor woman would have passed her, even in a crowd, without a second glance. There was a cheerful light in her eye and a humorous curve to her not too-full lips that promised an uplifting spirit within her even in serious mood.

It seemed as though this day–and its apparent peace–must breed happiness, although it was but a respite in the middle of winter. The balmy air, the chirrup of the bird, the far-flung reaches of the valley which she could see from this mounting lane, all delighted the senses and soothed the spirit.

Suddenly, with an unexpectedness that was shocking, there was a tremor in the air and the echo of a rumbling sound beneath the girl’s feet. The crack of a distant explosion followed. Then another, and another, until the sound became a continual grumble of angry explosions, resonant and threatening.

The girl did not stop, but the expression of her face lost its cheerfulness. The song of the bird was cut off sharply. It seemed as though the sun itself began drawing a veil over his face. The peaceful mood of nature was shattered.

The girl kept on her way, but she no longer stepped lightly and springily. Those muttering guns had brought a somber cloak for her feelings–to her very soul.

Somewhere a motor began to hum. The sound came nearer with great rapidity. It was a powerful engine. It was several seconds before the girl looked up instead of along the road in search of the seat of this whirring sound.

There shot into view overhead, and flying low, an aeroplane that looked like a huge flying insect–an enormous armored grasshopper. Only its head was somewhat pointed and there, fixed in the front, was the ugly muzzle of a machine gun. The airplane flew so low that she could see the details.

There were two masked men in it, one at the wheel, the other at the machine gun. The aeroplane swooped just above her head, descending almost to the treetops, the roaring of it deafening the girl in the Red Cross uniform. There was the red, white and blue shield of the United States painted upon the underside of the car.

Then it was gone, mounting higher and higher, until, as she stood to watch it, it became a painted speck against the sky. That is the lure of the flying machine. The wonder of it–and the terror–attracts the eye and shakes the spirit of the beholder.

With a sigh the girl went on up the lane, mounting the hill steadily, on the apex of which, among giant forest trees, loomed the turrets and towers of a large chateau.

Again the buzzing of a motor broke the near-by stillness, while the great guns boomed in the distance. The sudden activity on the front must portend some important movement, or why should so many flying machines be drawn toward this sector?

But in a minute she realized that this was not an aeroplane she heard. Debouching into sight from the fringing thickets came a powerful motor car, its forefront armored. She could barely see the head and shoulders of the man behind the steering wheel.

Down the hill plunged the car, and the girl quickly stepped to the side of the lane and waited for it to pass. The roar of its muffler was deafening. In a moment she saw that the tonneau of the gray car was filled with uniformed men.

They were officers in khaki, the insignia of their several grades scarcely distinguishable against the dull color of their clothing. How different from the gay uniforms of the French Army Corps, which, until of late, the girl of the Red Cross had been used to seeing in this locality.

Their faces were different, too. Gray, lean, hard-bitten faces, their eyebrows so light and sparse that it seemed their eyes were hard stones which never seemed to shift their straight-ahead gaze. Yet each man in the tonneau and the orderly beside the driver on the front seat saluted the Red Cross girl as she stood by the laneside.

In another half-minute the car had turned at the bottom of the hill and was out of sight.

She sighed again as she plodded on. Now, indeed, was the spring gone from her limbs and her expression was weary with a sadness that, although not personal, was heavy upon her.

Her thought was with the aeroplane and the motor car and with the thundering guns at the battle front, not many miles away. Yet she hastened her steps up this grassy lane toward the chateau, in quite the opposite direction.