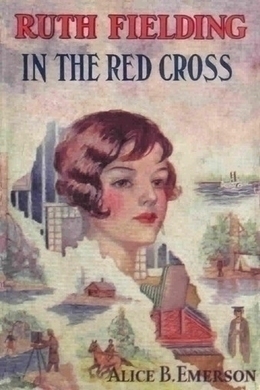 Ruth Fielding In the Red Cross

Doing Her Best For Uncle Sam

Now that the Great War has begun, Ruth and Helen take time off from their sophomore year at Ardmore College in order to devote their time to the Red Cross and the war effort. Ruth is soon transferred to the state headquarters, where she becomes concerned when she discovers that a woman, Mrs. Mantle, who had previously been very critical of the Red Cross, now works for the Red Cross in an important position. A mysterious fire wipes out all of the records of donations at the state headquarters, and Ruth wonders whether the fire was set in order to hide any evidence of missing money. Ruth soon travels to France and helps comfort the injured soldiers. Ruth’s worries surface again when Mrs. Mantle arrives in France along with two of her confederates. Ruth keeps a watchful eye on Mrs. Mantle as she wonders whether she should tell someone about her suspicions.

Ruth Fielding looked up from the box she was packing for the local Red Cross chapter, and, almost horrified, gazed into the black eyes of the girl who confronted her.

Helen Cameron’s face was tragic in its expression. She had been crying. The closely written sheets of the letter in her hand were shaken, as were her shoulders, with the sobs she tried to suppress.

“It–it’s written to father,” Helen said. “He gave it to me to read. I wish Tom had never gone to Harvard. Those boys there are completely crazy! To think–at the end of his freshman year–to throw it all up and go to a training camp!”

“I guess Harvard isn’t to blame,” said Ruth practically. If she was deeply moved by what her chum had told her, she quickly recovered her self-control. “The boys are going from other colleges all over the land. Is Tom going to try for a commission?”

“What does your father say?”

“Why,” cried the other girl as though that, too, had surprised and hurt her, “father cried ‘Bully for Tom!’ and then wiped his eyes on his handkerchief. What can men be made of, Ruth? He knows Tom may be killed, and yet he cheers for him.”

Ruth Fielding smiled and suddenly hugged Helen. Ruth’s smile was somewhat tremulous, but her chum did not observe this fact.

“I understand how your father feels, dear. Tom does not want to be drafted—-“

“He wouldn’t be drafted. He is not old enough. And even if they automatically draft the boys as they become of age, it would be months before they reached Tom, and the war will be over by that time. But here he is throwing himself away—-“

“Oh, Helen! Not that!” cried Ruth. “Our soldiers will fight for us–for their country–for honor. And a man’s life lost in such a cause is not thrown away.”

“That’s the way I feel,” said Helen, more steadily. “Tom is my twin. You don’t know what it means to have a twin brother, Ruth Fielding.”

“That is true,” sighed Ruth. “But I can imagine how you feel, dear. If you have hopes of the war’s being over so quickly, then I should expect Tom back from training camp safe and sound, and with no chance of ever facing the enemy. Has he really gone?”

“Oh, yes,” Helen told her despondently. “And lots of the boys who used to go to school with Tom at Seven Oaks. You know, all those jolly fellows who were at Snow Camp with us, and at Lighthouse Point, and on Cliff Island, and out West on Silver Ranch–and–and everywhere. Just to think! We may never see them again.”

“Dear me, Helen,” Ruth urged, “don’t look upon the blackest side of the cloud. It’s a long time before they go over there.”

“We don’t know how soon they will be in the trenches,” said her friend hopelessly. “These boys going to war—-“

“And I wish I was young enough to go with ‘em!” ejaculated a harsh voice, as the door of the back kitchen opened and the speaker stamped into the room. “Got that box ready to nail up, Niece Ruth? Ben’s hitching up the mules, and I want to get to Cheslow before dark.”

He was lean and wiry and the dust of his mill seemed to have been so ground into his very skin that he was a regular “dusty miller.” His features were as harsh as his voice, and he was seldom as excited as he seemed to be now.

“Who’s going to war now?” he asked, turning to Helen.

“Poor–poor Tom!” burst out the black-eyed girl, and began to dabble her eyes again.

“What’s the matter o’ him?” demanded the old miller.

“He’ll–he’ll be shot–I know he’ll be killed, and mangled horribly!”

“Fiddle-de-dee!” grunted Uncle Jabez, but his tone of voice was not as harsh as his words sounded. “I never got shot, nor mangled none to speak of, and I was fightin’ and marchin’ three endurin’ years.”

“Yep. And I wish they’d take me again. I can go a-soldierin’ as good as the next one. I’m tough and I’m wiry. They talk about this war bein’ a dreadful war. Shucks! All wars air dreadful. They won’t never have a battle over there that’ll be as bad as the Wilderness–believe me! They may have more battles, but I went through some of the wust a man could ever experience.”

“Not a bit. Three years of campaigning and never was scratched. Don’t you look for Tom Cameron to be killed fust thing just because he’s going to the wars. If more men didn’t come back from the wars than git killed in ‘em how d’ye s’pose this old world would have gone on rolling? Shucks!”

“I never knew you were a soldier, Uncle Jabez,” Ruth Fielding said.

“Wal, I was. Shucks! I was something of a sharpshooter, too. And we old fellers–course I was nothin’ but a boy, then–we could shoot. We’d l’arn’t to shoot on the farm. Powder an’ shot was hard to git and we l’arn’t to make every bullet count. My old Betsey–didn’t ye ever see my Civil War rifle?” he demanded of Ruth.