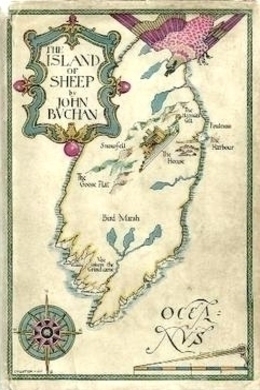 The Island of Sheep

The Man from the Norlands

In this, his final adventure, Buchan’s hero Richard Hannay becomes embroiled in one of the most hazardous escapades of his life. Two men are honour bound to help the tormented Valdemar Haraldsen, and a third decides to mastermind the whole affair out of a sheer love of adventure and a dislike of villains. A long-forgotten promise made by Richard Hannay finds him honor-bound to resolve a violent vendetta in which the lives of a young father and his daughter are in danger from unscrupulous and desperate men. Hannay sets out on a high-octane chase from the rural tranquility of his English manor to the Scottish Borders and, ultimately, to Scandinavia. On the remote Island of Sheep, a final confrontation takes place and everything is decided—once and for all. This, the last of the Hannay adventures—and the last of Buchan’s novels to be published during his lifetime—is a rare gem of high drama interwoven with Buchan’s personal beliefs about the problems of a post-war world.

I have never believed, as some people do, in omens and forewarnings, for the dramatic things in my life have generally come upon me as suddenly as a tropical thunderstorm. But I have observed that in a queer way I have been sometimes prepared for them by my mind drifting into an unexpected mood. I would remember something I had not thought of for years, or start without reason an unusual line of thought. That was what happened to me on an October evening when I got into the train at Victoria.

That afternoon I had done what for me was a rare thing, and attended a debate in the House of Commons. Lamancha was to make a full-dress speech, and Lamancha on such an occasion is worth hearing. But it was not my friend’s eloquence that filled my mind or his deadly handling of interruptions, but a reply which the Colonial Secretary gave to a question before the debate began. A name can sometimes be like a scent or a tune, a key to long-buried memories. When old Melbury spoke the word ‘Lombard,’ my thoughts were set racing down dim alleys of the past. He quoted a memorandum written years ago and incorporated in the report of a certain Commission; ‘A very able memorandum,’ he called it, ‘by a certain Mr. Lombard,’ which contained the point he wished to make. Able! I should think it was. And the writer! To be described as ‘a certain Mr. Lombard’ showed how completely the man I once knew had dropped out of the world’s ken.

I did not do justice to Lamancha’s speech, for I thought of Lombard all through it. I thought of him in my taxi going to the station, and, when I had found my compartment, his face came between me and the pages of my evening paper. I had not thought much about him for years, but now Melbury’s chance quotation had started a set of pictures which flitted like a film series before my eyes. I saw Lombard as I had last seen him, dressed a little differently from to-day, a little fuller in the face than we lean kine who have survived the War, with eyes not blurred from motoring, and voice not high-pitched like ours to override the din of our environment. I saw his smile, the odd quick lift of his chin–and I realized that I was growing old and had left some wonderful things behind me.

The compartment filled up with City men going home to their comfortable southern suburbs. They all had evening papers, and some had morning papers to finish. Most of them appeared to make this journey regularly, for they knew each other, and exchanged market gossip or commented on public affairs. A friendly confidential party; and I sat in my corner looking out of the window at another landscape than what some poet has called ‘smoky dwarf houses,’ and seeing a young man’s face which was very different from theirs.

Lombard had come out to East Africa as secretary to a Government Commission, a Commission which he very soon manipulated as he pleased. I met him there when I was sent up on a prospecting job. He was very young then, not more than twenty-five, and he was in his first years at the Bar. He had been at one of the lesser public schools and at Cambridge, had been a good scholar, and was as full as he could hold of books. I remembered our first meeting in a cold camp on the Uasin Gishu plateau, when he quoted and translated a Greek line about the bitter little wind before dawn. But he never paraded his learning, for his desire was to be in complete harmony with his surroundings, and to look very much the pioneer. Those were the old days in East Africa, before the ‘Happy Valley’ and the remittance man and settlers who wanted self- government, and people’s hopes were high. He was full of the heroes of the past, like Roddy Owen and Vandeleur and the Portals, and, except that he was a poor horseman, he had something in common with them. With his light figure and bleached fair hair and brown skin he looked the very model of the adventurous Englishman. I thought that there might be a touch of the Jew in his ancestry– something high-coloured and foreign at any rate, for he was more expansive and quickly fired than the rest of us. But on the whole he was as English as a Hampshire water-meadow….

The compartment was blue with pipe-smoke. My companions were talking about rock-gardens. The man in the corner opposite me was apparently an authority on the subject, and he had much to say about different firms of nursery gardeners. He was blond, plump, and baldish, and had a pleasant voice whose tones woke a recollection which I could not fix. I thought that I had probably seen him at some company meeting….