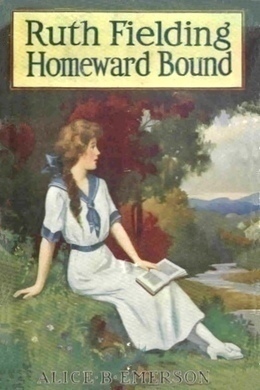 A bomb strikes the French hospital in which Ruth is working, and Ruth’s shoulder is seriously injured. Ruth is forced to end her work with the Red Cross and head home to the United States. Just before Ruth boards the Admiral Pekhard, she learns that Tom Cameron is missing after a plane crash. Ruth fears that Tom may be dead. Once the ship departs, Ruth meets a German lady named Irma Lentz who speaks of the Americans with scorn. That evening, Ruth overhears Ms. Lentz speaking in German to a crew member, and their conversation sounds suspicious. Ruth takes her suspicions to the captain of the ship, but the man makes fun of her. Later, Ruth realizes that the captain told Ms. Lentz and many other people of Ruth’s suspicions, causing Ruth to be ostracized as a troublemaker. There was a gray, swiftly steaming ship bearing down upon the Admiral Pekhard. Ruth notices a stowaway on one of the ship’s lifeboats and tries to notify the ship’s first officer, Mr. Dowd, but is unable to reach him. An explosion rocks the ship, and the captain orders an evacuation. As Ruth heads to her room to fetch her important papers, she is tripped by a cord strung across the corridor and is knocked unconscious. Ruth awakens later to discover that she is alone on the ship and stranded at sea. Ruth must find a way to summon help as she worries about whether the abandoned ship will be attacked by the Germans.

“And you once said, Heavy Stone, that you did not believe a poilu could love a fat girl!”

Helen said it in something like awe. While Ruth’s tea-urn bubbled cozily three pair of very bright eyes were bent above a tiny, iridescent spark which adorned the “heart finger” of the plumper girl’s left hand.

There is something about an engagement diamond that makes it sparkle and twinkle more than any other diamond. You do not believe that? Wait until you wear one on the third finger of your left hand yourself!

These three girls, who owned all the rings and other jewelry that was good for them, continued to adore this newest of Jennie Stone’s possessions until the tea water boiled over. Ruth Fielding arose with an exclamation of vexation, and corrected the height of the alcohol blaze and dropped in the “pinch” of tea.

It was mid-afternoon, the hour when a cup of tea comforts the fagged nerves and inspires the waning spirit of womankind almost the world over. These three girls crowded into Ruth Fielding’s little cell, even gave up the worship of the ring, to sip the tea which the hostess soon poured into the cups.

“The cups are nicked; no wonder,” sighed Ruth. “They have traveled many hundreds of miles with me, girls. Think! I got them at Briarwood—-“

“You’re in a dreadfully sentimental mood, Jennie,” declared Helen Cameron with some scorn. “Is that the way a diamond ring affects all engaged girls?”

“Oh, how fat I was in those days, girls! And how I did eat!” groaned the girl who had been known at boarding school as “Heavy Stone,” and seldom by any other name among her mates.

“And you still continue to eat!” ejaculated Helen, the slimmest of the three, and a very black-eyed girl with blue-black hair and a perfect complexion. She removed the tin wafer box from Jennie’s reach.

“Those are not real eats,” complained the girl with the diamond ring. “A million would not add a thousandth part of an ounce to my pounds.”

“Listen to her!” gasped Helen. “If Major Henri Marchand could hear her now!”

“He is a full colonel, I’d have you know,” declared Jennie Stone. “And in charge of his section. In our army it is the Intelligence Department–Secret Service.”

“That is what Tom calls the ‘Camouflage Bureau.’ Colonel Marchand has a nice, sitting-down job,” scoffed Helen.

“Colonel Marchand,” said Ruth Fielding, gravely, “has been through the enemy’s lines, and with his brother, the Count Allaire, has obtained more information for the French Army, I am sure, than most of the brave men belonging to the Intelligence Department. Nobody can question his courage with justice, Jennie.”

“You ought to know!” pouted the plumper girl. “You and my colonel have tramped all over the French front together.”

“Oh, no! There were some places we did not go to,” laughed Ruth.

“And just think,” cried Helen, “of her leaving us here in this hospital, Heavy, while she went off with your Frenchman to look for Tom, my own brother! And she would not tell me a word about it till she was back with him, safe and sound. This Ruthie Fielding of ours—-“

“Tut, tut!” said Ruth, shaking her chum a little, and then kissing her. “Don’t be jealous, Helen.”

“It’s not I that should be jealous. It is Heavy’s friend with whom you went over to the Germans,” declared Helen, tossing her head.

“And Jennie had not even met Major Marchand–that was! ‘Colonel,’ I should say,” said Ruth. “Oh, girls! so much has happened to us all during these past few months.”

“During the past few years,” said the plump girl sepulchrally. “Talking about your cracked and chipped china,” and she held up her empty cup to look through it. “I remember when you got this tea set, Ruthie. Remember the Fox, and all her chums at Briarwood, and how mean we treated you, Ruthie?”

“Oh, don’t!” exclaimed Helen. “I treated my Ruthie mean in those days, too–sometimes.”

“Goodness!” drawled their friend, who was in the uniform of the Red Cross worker and was a very practical looking, as well as pretty, girl. “Don’t bring up such sad and sorrowful remembrances. This tea is positively going to your heads and making you maudlin. Come! I will give you a toast. You must drink your cup to it–and to the very dregs!”

“‘Dregs’ is right, Ruth,” complained Jennie, peering into her cup. “You never will strain tea properly.”

“Pooh! If you do,” scoffed Helen, “you never have any leaves left with which to tell your fortune.”

“‘Fortune!’ Superstitious child!” Then Jennie added in a whisper: “Do you know, Madame Picolet knows how to tell fortunes splendidly with tea-grounds. She positively told me I was going to marry a tall, dark, military man, of noble blood, and who had recently been advanced in the service.”