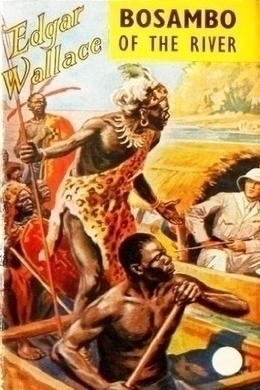 The fourth instalment of the Sanders series. Those who love classic adventure especially set against an African backdrop will discover a rich vein of reading pleasure in Bosambo of the River. Another exciting title in the Sanders of the River adventure series, featuring Commissioner Sanders.

Many years ago the Monrovian Government sent one Bosambo, a native of the Kroo coast and consequently a thief, to penal servitude for the term of his natural life. Bosambo, who had other views on the matter, was given an axe and a saw in the penal settlement–which was a patch of wild forest in the back country–and told to cut down and trim certain mahogany trees in company with other unfortunate men similarly circumstanced.

To assure themselves of Bosambo’s obedience, the Government of Liberia set over him a number of compatriots, armed with weapons which had rendered good service at Gettysburg, and had been presented to the President of Liberia by President Grant. They were picturesque weapons, but they were somewhat deficient in accuracy, especially when handled by the inexpert soldiers of the Monrovian coast. Bosambo, who put his axe to an ignoble use, no less than the slaying of Captain Peter Cole–who was as black as the ten of clubs, but a gentleman by the Liberian code–left the penal settlement with passionate haste. The Gettysburg relics made fairly good practice up to two hundred yards, but Bosambo was a mile away before the guards, searching the body of their dead commander for the key of the ammunition store, had secured food for their lethal weapons.

The government offered a reward of two hundred and fifty dollars for Bosambo, dead or alive. But, although the reward, was claimed and paid to the half-brother of the Secretary of War, it is a fact that Bosambo was never caught. On the contrary, he made his way to a far land, and became, by virtue of his attainments, chief of the Ochori.

Bosambo was too good a sportsman to leave his persecutors at peace. There can be little doubt that the Kroo insurrection, which cost the Liberian Government eight hundred and twenty-one pounds sixteen shillings to suppress, was due to the instigation and assistance of Bosambo. Of this insurrection, and the part that Bosambo played, it may be necessary to speak again.

The second rebellion was a more serious and expensive affair; and it was at the conclusion of this that the Liberian Government made representations to Britain. Sanders, who conducted an independent inquiry into the question of Bosambo’s complicity, reported that there was no evidence whatever that Bosambo was directly or indirectly responsible. And with that the Liberian Government was forced to be content; but they expressed their feelings by offering a reward of two thousand dollars for Bosambo alive or dead–preferably alive. They added, for the benefit of minor government officials and their neighbours, that they would, in the language of the advertisement, reject all substitutes. The news of this price went up and down the coast and very far into the interior, yet strangely enough Arachi of the Isisi did not learn of it until many years afterward.

Arachi was of the Isisi people, and a great borrower. Up and down the river all men knew him for such, so that his name passed into the legendary vocabulary of the people whilst he yet lived; and did the wife of Yoka beg from the wife of O’taki the service of a cooking-pot, be sure that O’taki’s wife would agree, but with heavy pleasantry scream after the retiring pot: “O thou shameless Arachi!” whereupon all the village folk who heard the jest would rock with laughter,

Arachi was the son of a chief, but in a country where chieftainship was not hereditary, and where, moreover, many chiefs’ sons dwelt without distinction, his parentage was of little advantage. Certainly it did not serve him as, in his heart, he thought he should be served.

He was tall and thin, and his knees were curiously knobbly. He carried his head on one side importantly, and was profoundly contemptuous of his fellows.

Once he came to Sanders.

“Lord,” he said, “I am a chief’s son, as you know, and I am very wise. Men who look upon me say, ‘Behold, this young man is full of craft,’ because of my looks. Also I am a great talker.”

“There are many in this land who are great talkers, Arachi,” said Sanders, unpleasantly, “yet they do not travel for two days downstream to tell me so.”

“Master,” said Arachi impressively, “I came to you because I desire advancement. Many of your little chiefs are fools, and, moreover, unworthy. Now I am the son of a chief, and it is my wish to sit down in the place of my father. Also, lord, remember this, that I have dwelt among foreign people, the Angola folk, and speak their tongue.”

“Seven times you have asked me, Arachi,” he said, “and seven times I have told you you are no chief for me. Now I tell you this–that I am tired of seeing you, and if you come to me again I will throw you to the monkeys. [Colloquial: ‘Make you look foolish.’–E.W.] As for your Angola palaver, I tell you this–that if it happen–which may all gods forbid!–that a tribe of Angola folk sit down with me, you shall be chief.”