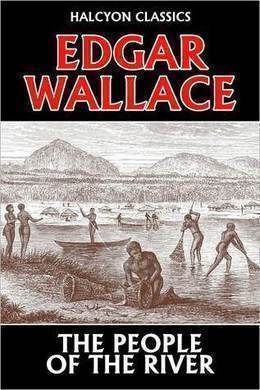 The People of the River

The second installment in the enthralling exploits of Commissioner Sanders, Great Britain’s man in colonial Africa Commissioner Sanders should have known better than to go on vacation. He is just a few days from his offices in British West Africa when he receives word from his second in command that trouble, always at a simmer in this jungle outpost, is about to come to a boil. He rushes home, arriving just in time for a meeting of the chiefs of his territory, who have been misled by an ambitious agitator named Bosambo into thinking that Sanders is dead. Sanders’s return staves off rebellion, but Bosambo’s power grab is not over yet. To keep the province from erupting into all-out tribal warfare, Sanders must outsmart the most brilliant chieftain in Africa. In these rip-roaring adventures, the heroic commissioner contends with malaria, ju-ju, and the whims of government officials safely ensconced in their London offices. The People of the River is both a good-natured thrill ride and a fascinating historical document.

Sanders had been away on a holiday.

The Commissioner, whose work lay for the main part in wandering through a malarial country in some discomfort and danger, spent his holiday in travelling through another malarial country in as great discomfort and at no less risk. The only perceptible difference, so far as could be seen, between his work and his holiday was that instead of considering his own worries he had to listen to the troubles of somebody else.

Mr. Commissioner Sanders derived no small amount of satisfaction from such a vacation, which is a sure sign that he was most human.

His holiday was a long one, for he went by way of St. Paul de Loanda overland to the Congo, shot an elephant or two in the French Congo, went by mission steamer to the Sangar River and made his way back to Stanley Pool.

At Matadi he found letters from his relief, a mild youth who had come from headquarters to take his place as a temporary measure, and was quite satisfied in his inside mind that he was eminently qualified to occupy the seat of the Commissioner.

The letter was a little discursive, but Sanders read it as eagerly as a girl reads her first love letter. For he was reading about a land which was very dear to him.

“Umfebi, the headman of Kulanga, has given me a little trouble. He wants sitting on badly, and if I had control…” Sanders grinned unpleasantly and said something about “impertinent swine,” but did he not refer to the erring Umfeb? “I find M’laka, the chief of the Little River, a very pleasant man to deal with: he was most attentive to me when I visited his village and trotted out all his dancing girls for my amusement.” Sanders made a little grimace. He knew M’laka for a rascal and wondered. “A chief who has been most civil and courteous is Bosambo of the Ochori. I know this will interest you because Bosambo tells me that he is a special protege of yours. He tells me how you had paid for his education as a child and had gone to a lot of trouble to teach him the English language. I did not know of this.”

Sanders did not know of it either, and swore an oath to the brazen sky to take this same Bosambo, thief by nature, convict by the wise provision of the Liberian Government, and chief of the Ochori by sheer effrontery, and kick him from one end of the city to the other.

“He is certainly the most civilised of your men,” the letter went on. “He has been most attentive to the astronomical mission which came out in your absence to observe the eclipse of the moon. They speak very highly of his attention and he has been most active in his attempt to recover some of their property which was either lost or stolen on their way down the river.”

Sanders smiled, for he himself had lost property in Bosambo’s territory.

“I think I will go home,” said Sanders.

Home he went by the nearest and the quickest way and came to headquarters early one morning, to the annoyance of his relief, who had planned a great and fairly useless palaver to which all the chiefs of all the land had been invited.

“For,” he explained to Sanders in a grieved tone, “it seems to me that the only way to ensure peace is to get at the minds of these people, and the only method by which one can get at their minds is to bring them all together.”

Sanders stretched his legs contemptuously and sniffed. They sat at chop on the broad stoep before the Commissioner’s house, and Mr. Franks–so the deputy Commissioner was named–was in every sense a guest. Sanders checked the vitriolic appreciation of the native mind which came readily to his lips, and inquired:

“Since you have gathered all these chiefs together,” he said, “and they are present in my Houssa lines, with their wives and servants, eating my ‘special expense’ vote out of existence, you had better go through with it.”

That evening the chiefs assembled before the residency, squatting in a semi-circle about the chair on which sat Mr. Franks–an enthusiastic young man with a very pink face and gold-mounted spectacles.

Sanders sat a little behind and said nothing, scrutinising the assembly with an unfriendly eye. He observed without emotion that Bosambo of the Ochori occupied the place of honour in the centre, wearing a leopard skin and loop after loop of glittering glass beads. He had ostrich feathers in his hair and bangles of polished brass about his arms and ankles and, chiefest abomination, suspended by a scarlet ribbon from that portion of the skin which covered his left shoulder, hung a large and elaborate decoration.

Beside him the kings and chiefs of other lands were mean, commonplace men. B’fari of the Larger Isisi, Kulala of the N’Gombi, Kandara of the Akasava, Etobi of the River-beyond-the-River, and a score of little kings and overlords might have been so many carriers.

It was M’laka of the Lesser Isisi who opened the palaver.