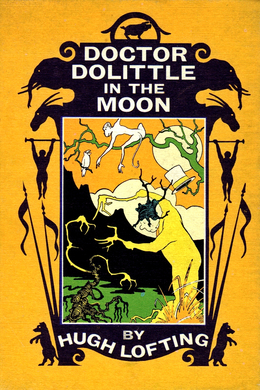 Doctor Dolittle in the Moon

Dr. Dolittle has landed on the Moon! He meets Otho Bludge the Moon Man, a Stone Age artist who was the only human on the Moon when it broke away from the Earth. The animals of the Moon flock to Doctor Dolittle, and he discovers how to communicate with the intelligent plants there. But will the lunar flora and fauna ever let him leave?

In writing the story of our adventures in the Moon I, Thomas Stubbins, secretary to John Dolittle, M.D. (and son of Jacob Stubbins, the cobbler of Puddleby-on-the-Marsh), find myself greatly puzzled. It is not an easy task, remembering day by day and hour by hour those crowded and exciting weeks. It is true I made many notes for the Doctor, books full of them. But that information was nearly all of a highly scientific kind. And I feel that I should tell the story here not for the scientist so much as for the general reader. And it is in that I am perplexed.

For the story could be told in many ways. People are so different in what they want to know about a voyage. I had thought at one time that Jip could help me; and after reading him some chapters as I had first set them down I asked for his opinion. I discovered he was mostly interested in whether we had seen any rats in the Moon. I found I could not tell him. I didn’t remember seeing any; and yet I am sure there must have been some–or some sort of creature like a rat.

Then I asked Gub-Gub. And what he was chiefly concerned to hear was the kind of vegetables we had fed on. (Dab-Dab snorted at me for my pains and said I should have known better than to ask him.) I tried my mother. She wanted to know how we had managed when our underwear wore out–and a whole lot of other matters about our living conditions, hardly any of which I could answer. Next I went to Matthew Mugg. And the things he wanted to learn were worse than either my mother’s or Jip’s: Were there any shops in the Moon? What were the dogs and cats like? The good Cats’-meat-Man seemed to have imagined it a place not very different from Puddleby or the East End of London.

No, trying to get at what most people wanted to read concerning the Moon did not bring me much profit. I couldn’t seem to tell them any of the things they were most anxious to know. It reminded me of the first time I had come to the Doctor’s house, hoping to be hired as his assistant, and dear old Polynesia the parrot had questioned me. “Are you a good noticer?” she had asked. I had always thought I was–pretty good, anyhow. But now I felt I had been a very poor noticer. For it seemed I hadn’t noticed any of the things I should have done to make the story of our voyage interesting to the ordinary public.

The trouble was of course attention. Human attention is like butter: you can only spread it so thin and no thinner. If you try to spread it over too many things at once you just don’t remember them. And certainly during all our waking hours upon the Moon there was so much for our ears and eyes and minds to take in it is a wonder, I often think, that any clear memories at all remain.

The one who could have been of most help to me in writing my impressions of the Moon was Jamaro Bumblelily, the giant moth who carried us there. But as he was nowhere near me when I set to work upon this book I decided I had better not consider the particular wishes of Jip, Gub-Gub, my mother, Matthew or any one else, but set the story down in my own way. Clearly the tale must be in any case an imperfect, incomplete one. And the only thing to do is to go forward with it, step by step, to the best of my recollection, from where the great insect hovered, with our beating hearts pressed close against his broad back, over the near and glowing landscape of the Moon.

Any one could tell that the moth knew every detail of the country we were landing in. Planing, circling and diving, he brought his wide-winged body very deliberately down towards a little valley fenced in with hills. The bottom of this, I saw as we drew nearer, was level, sandy and dry.

The hills struck one at once as unusual. In fact all the mountains as well (for much greater heights could presently be seen towering away in the dim greenish light behind the nearer, lower ranges) had one peculiarity. The tops seemed to be cut off and cup-like. The Doctor afterwards explained to me that they were extinct volcanoes. Nearly all these peaks had once belched fire and molten lava but were now cold and dead. Some had been fretted and worn by winds and weather and time into quite curious shapes; and yet others had been filled up or half buried by drifting sand so that they had nearly lost the appearance of volcanoes. I was reminded of “The Whispering Rocks” which we had seen in Spidermonkey Island. And though this scene was different in many things, no one who had ever looked upon a volcanic landscape before could have mistaken it for anything else.

The little valley, long and narrow, which we were apparently making for did not show many signs of life, vegetable or animal. But we were not disturbed by that. At least the Doctor wasn’t. He had seen a tree and he was satisfied that before long he would find water, vegetation and creatures.