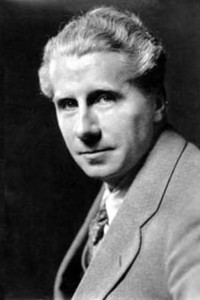 Hugh John Lofting was a trained as a civil engineer and author who created the character of Doctor Dolittle; one of the classics of children’s literature. Hugh Lofting’s doctor from Puddleby-on-the-Marsh who could speak to animals first saw light in the author’s illustrated letters to children, written from the trenches during World War I when actual news, he later said, was either too horrible or too dull. Eight more books followed, and after Lofting’s death two more volumes, composed of short unpublished pieces, appeared. The series has been adapted for film and television many times, for stage twice, and for radio. (source: Wikipedia)

Doctor Dolittle and the Green Canary (1950)

The charming story of Pippinella, the green canary, as told by Pip herself to the Doctor. Although much of the material had been printed originally in 1...read more »

Dr. Dolittle has landed on the Moon! He meets Otho Bludge the Moon Man, a Stone Age artist who was the only human on the Moon when it broke away from th...read more »

The doctor needs money to pay off a voyage to Africa, so he joins the circus with the pushmi-pullyu as his attraction. He enlightens a circus owner who ...read more »

When he discovers that animals from all over the world want to communicate with each other, Dr Dolittle has the wonderful idea of setting up the Swallow...read more »

No one loves and understands animals like the eccentric nineteenth-century physician Dr. Dolittle—who masters animal language with the help of Polynesia...read more »

The Voyages of Doctor Dolittle (1922)

Doctor John Dolittle, the veterinarian who can actually talk to animals, sets sail on the high seas for new adventures! Accompanied by his young friend ...read more »