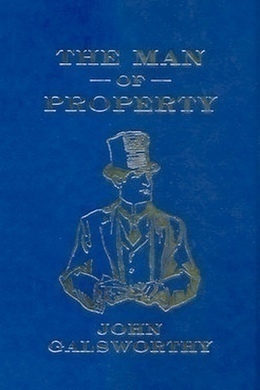 The Man Of Property

The most prized item in Soames Forsyte’s collection of beautiful things is his wife, the enigmatic Irene. But when she falls in love with Bosinney, a penniless architect who utterly rejects the Forsyte values, their affair touches off a series of events which can only end in disgrace and disaster. John Galsworthy tackles his theme of the demise of the upper-middle classes with irony and compassion.

Those privileged to be present at a family festival of the Forsytes have seen that charming and instructive sight–an upper middle-class family in full plumage. But whosoever of these favoured persons has possessed the gift of psychological analysis (a talent without monetary value and properly ignored by the Forsytes), has witnessed a spectacle, not only delightful in itself, but illustrative of an obscure human problem. In plainer words, he has gleaned from a gathering of this family–no branch of which had a liking for the other, between no three members of whom existed anything worthy of the name of sympathy–evidence of that mysterious concrete tenacity which renders a family so formidable a unit of society, so clear a reproduction of society in miniature. He has been admitted to a vision of the dim roads of social progress, has understood something of patriarchal life, of the swarmings of savage hordes, of the rise and fall of nations. He is like one who, having watched a tree grow from its planting–a paragon of tenacity, insulation, and success, amidst the deaths of a hundred other plants less fibrous, sappy, and persistent–one day will see it flourishing with bland, full foliage, in an almost repugnant prosperity, at the summit of its efflorescence.

On June 15, eighteen eighty-six, about four of the afternoon, the observer who chanced to be present at the house of old Jolyon Forsyte in Stanhope Gate, might have seen the highest efflorescence of the Forsytes.

This was the occasion of an ‘at home’ to celebrate the engagement of Miss June Forsyte, old Jolyon’s granddaughter, to Mr. Philip Bosinney. In the bravery of light gloves, buff waistcoats, feathers and frocks, the family were present, even Aunt Ann, who now but seldom left the corner of her brother Timothy’s green drawing-room, where, under the aegis of a plume of dyed pampas grass in a light blue vase, she sat all day reading and knitting, surrounded by the effigies of three generations of Forsytes. Even Aunt Ann was there; her inflexible back, and the dignity of her calm old face personifying the rigid possessiveness of the family idea.

When a Forsyte was engaged, married, or born, the Forsytes were present; when a Forsyte died–but no Forsyte had as yet died; they did not die; death being contrary to their principles, they took precautions against it, the instinctive precautions of highly vitalized persons who resent encroachments on their property.

About the Forsytes mingling that day with the crowd of other guests, there was a more than ordinarily groomed look, an alert, inquisitive assurance, a brilliant respectability, as though they were attired in defiance of something. The habitual sniff on the face of Soames Forsyte had spread through their ranks; they were on their guard.

The subconscious offensiveness of their attitude has constituted old Jolyon’s ‘home’ the psychological moment of the family history, made it the prelude of their drama.

The Forsytes were resentful of something, not individually, but as a family; this resentment expressed itself in an added perfection of raiment, an exuberance of family cordiality, an exaggeration of family importance, and–the sniff. Danger–so indispensable in bringing out the fundamental quality of any society, group, or individual–was what the Forsytes scented; the premonition of danger put a burnish on their armour. For the first time, as a family, they appeared to have an instinct of being in contact, with some strange and unsafe thing.